Test match jerseys are something of a no-win situation for unions and kit designers – the look of national team jerseys is so ingrained into the psyche of us rugby fans that anything that isn’t the most classic-looking design will cause uproar and, in this day and age, a storm of vitriol on social media.

That was exactly what happened in 2015 when the WRU revealed the jersey that Wales would wear through the World Cup and beyond – complete with unconventional gold and oxblood accents. The truth of the matter was that the shirt was beautiful taken on its own merits, and once the initial furore had died down, the majority of fans came to quite like it – we certainly did.

However, after all the fuss last time, it’s no surprise that the WRU has opted for something a lot more conventional for their 2017/19 home shirt: clean lines, classic looks, minimal fuss. And they’ve delivered it with aplomb.

From a distance at least, this shirt is about as classic as you can get – if you asked the average Wales fan to draw a Wales shirt, this would be it. Plain red, simple, nothing that overly draws the eye away from the iconic nature of the Wales home shirt. 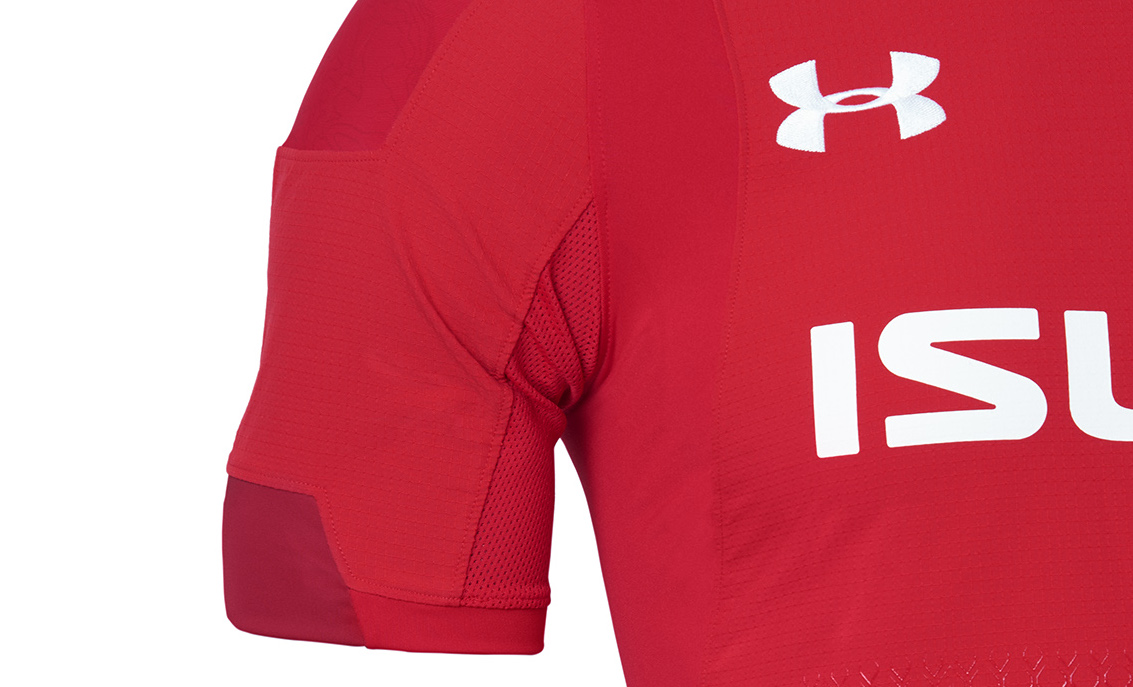 So for starters, it’s a red shirt, but not all the reds are equal – once again the darker red has made an appearance (though this time it’s ‘Daredevil red’ as opposed to ‘Oxblood’) and adds some suitably modern accents to the sleeves, and also the brand new collar design.

The shirt’s real killer feature, however, can be found along the panels that run across the shoulders. Look closely and you’ll notice some super-subtle tonal wavy and irregular concentric rings sublimated into the fabric, and they’re rings with a lot of meaning.

These rings are actually a topographical map of various parts of Wales – including Neath, Cardiff, Bangor and Lampeter. Hills and mountains are the most intrinsic part of the Welsh landscape, and so the idea is that Wales is quite literally woven into the fabric of this jersey.

But that’s not all – thanks to the clever way that Under Armour has used this fabric, every single Wales jersey, both on-field and replica, will have a slightly different configuration of this pattern. This makes every single Welsh shirt unique, a seriously cool idea that only serves to make this more special.

The WRU’s aim with this shirt was to craft a jersey that from a distance looked like any other classic Wales shirt, but on closer inspection was something a bit different and a bit special. They’ve absolutely smashed it with this home shirt, and combined with the clean, simple white logo of new main sponsor Isuzu, it’s created a home shirt that’s the nicest of the Under Armour era, and one of the nicest new test jerseys of the season.