A few months ago, the Scarlets launched their 2015/16 home shirt from returning supplier Kooga, with all the usual fanfare you’d expect. We were told the change shirt would follow later, and were quite surprised when the Scarlets trotted out for their first away game of the season wearing a shirt that we’d never seen before (in fact it had quietly been launched for a preseason fixture against Jersey), and had had almost no promotion or fanfare on social media – pretty unusual in this day and age, so what gives?

Well, what gives, is that, well… just look at the damn thing. We don’t object to bold, boundary-pushing shirt designs that fly in the face of tradition, but there’s no escaping the fact that, while this is definitely one of the most memorable and eye-catching shirts this season, it’s also one of the most polarising. And we’d also imagine that most people’s compass is going to be pointing squarely at the ‘Oh Christ what is that!?’ pole…

The Scarlets branched out into the interesting yellow-to-red fade idea last season, and while again is was pretty polarising, on the whole we felt that they pulled it off. This however, is a bit of everything – a kitchen-sink design that seems to incorporate every modern design motif around into one shirt. 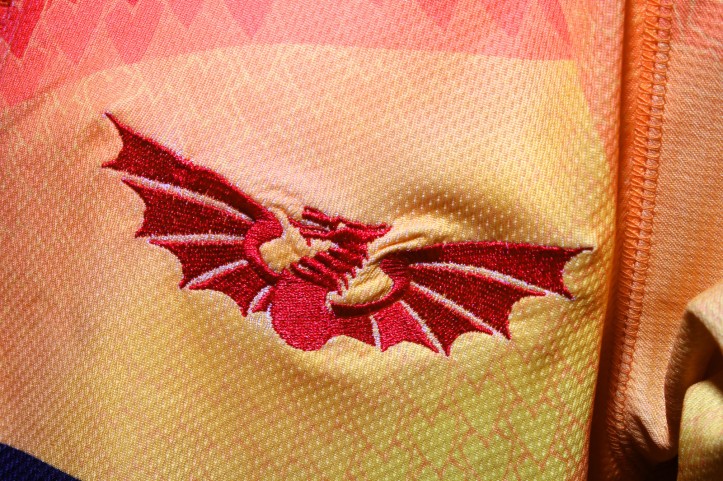 First up, again we have the orange-to-yellow fade, though this time it’s definitely leaning more towards the orange end of the spectrum than last year’s predominantly yellow shirt, and is flipped so the top is darker than the bottom. Nothing wrong with that per se, but we have noticed that, when combined with the red shorts it’s worn with, it can look pretty similar to the home from a distance on TV, particularly from the back – not the end of the world, but could cause issues if the Scarlets are playing away games against any other team playing in red.

In addition to the fade, we also have a large red, vaguely chevron-ish motif around the shoulder, shaped like the wing of the dragon on the Scarlets’ badge, some slightly random dynamic swooshy things around the ribcage, and to top it all off, a sublimated dragon-scale pattern covering the entire jersey. 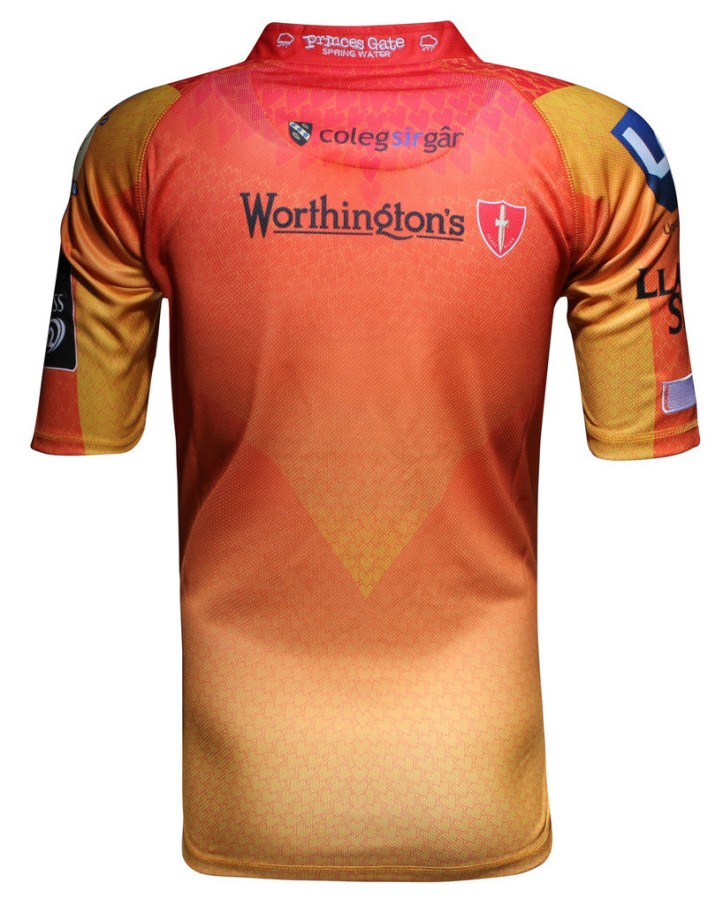 To be totally honest, it’s a bit of a mess. We think it looks better on the field (and a lot more orange) than it does in these photos, but there’s no getting away from the fact that there’s too much going on here. Pick one or two elements – the scales, the chevron, the fade or the swooshes – and make that the focus of the shirt, and you’ve got a pretty cool unconventional design. Slapping it all together just makes for a weird acid dream of a shirt that drags you from one disparate element to another.

It’s also quite amusing to note how much the dragon scales actually look quite a lot like hearts in places, particularly in the red ‘wing’ bit around the shoulder. We’re not 100% sure about this, but we’re pretty sure the designers did not intend the focal point of the design to remind us of the excercise-book doodlings of a lovestruck teenager, but uh… oh well. 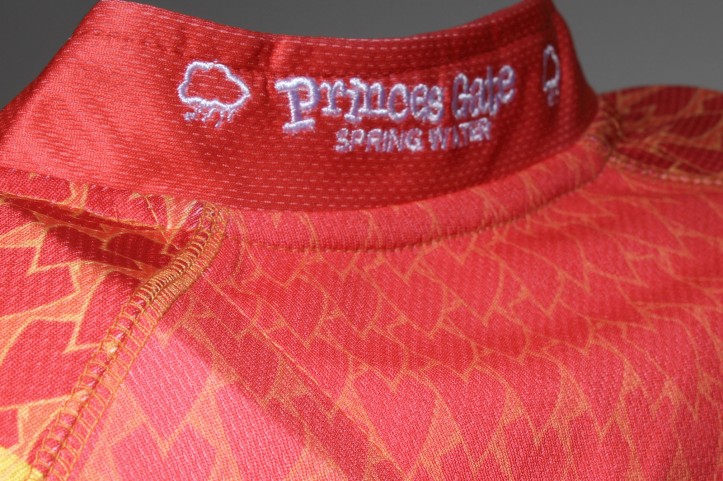 We imagine some people will appreciate such an unconventional alternate shirt from the Scarlets – and with just a touch more restraint, we’d be agreeing with them. After all, the change shirt is where clubs have the opportunity to try something slightly outside the box, and you can’t really deny this is way, way out of it.

However, for us, it just goes too far. What we have here isn’t a ‘tequila sunrise‘ it’s a bloody mary mixed with a vodka and orange, with a few shots of Baileys tossed in. An ill-matched mix of ingredients that, while fine on their own, are pretty hard to stomach when they’re put together.