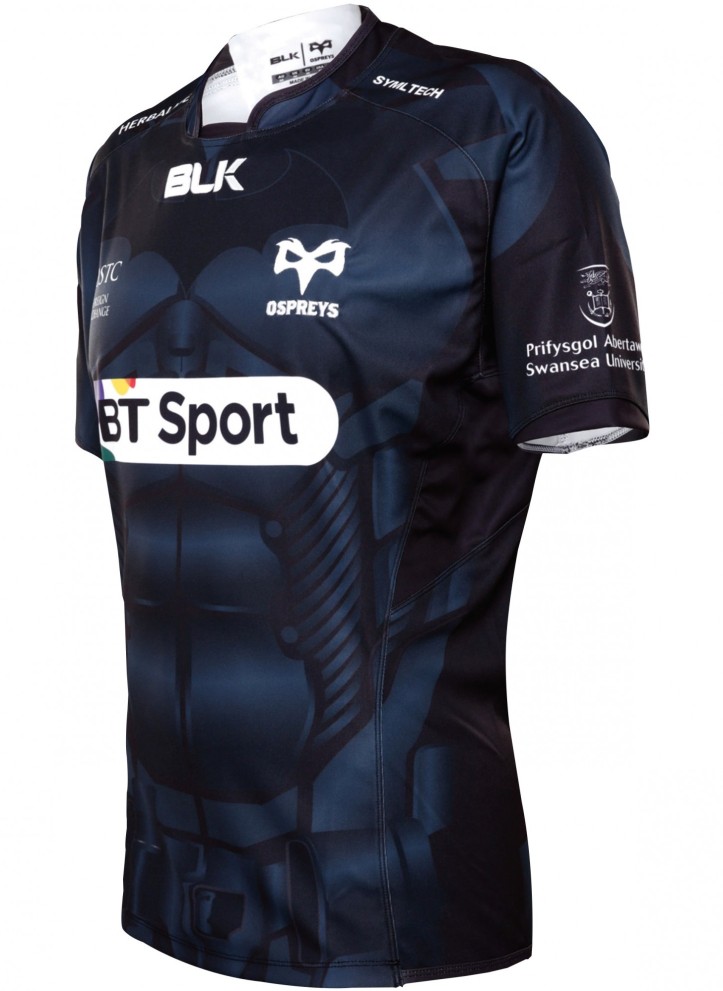 One of the coolest rugby jersey trends of recent years has been the rise of the superhero shirt. Designs that combine the signature costume of a comic book superhero with the vibe of the team in question, all wrapped up in a beautiful rugby shirt-shaped package. The concept has been the preserve of Australian teams, but for the first time ever, BLK and the Ospreys are bringing the concept up north – and they’re doing it in the best possible way…

Aussie brand BLK first got into the superhero game last season, when, thanks to a tie-up with DC comics, they created jerseys themed around The Flash and Superman for the Reds and Rebels respectively. The Ospreys will be the first team in Europe to get the same treatment (Connacht and Toulouse are also getting DC jerseys) and they’ve brought out the biggest gun of all to mark the occasion – Batman.

The Ospreys’ all-black colour scheme is a perfect fit for the Dark Knight, and the designers at BLK have done a fantastic job creating a dark, brooding design that feels a lot more like a live-action movie Batman suit than some of the more uh, colourful, takes on it from comics and TV (thank god they didn’t go for the ‘Bat Rabbit‘ robot look that’s currently being used in the comics, either…)

It’s a cool look, however, and we really like the way the bat symbol is carefully slotted into the existing sponsors on the chest, and while we understand why they’ve opted for the darker symbol, the 80s child in us can’t help but wonder how much more striking (and perhaps a little cluttered) the classic yellow symbol would have looked. 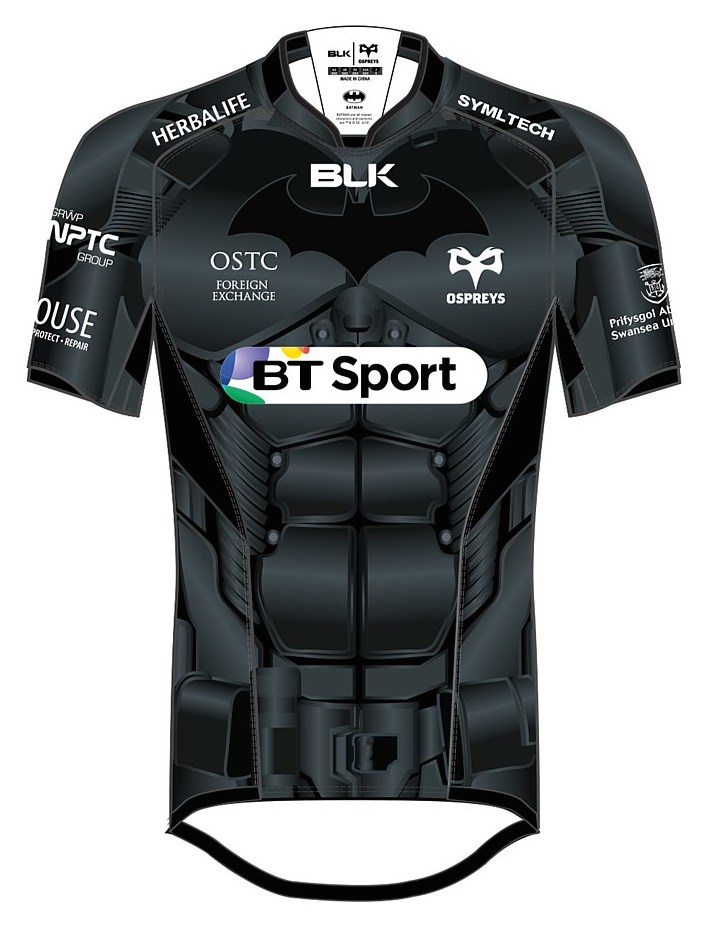 There’s an interesting blue-y tint to the single real-world shot of the shirt we’ve got so far, but the templates we’ve seen from BLK indicate that this is very much black, as you’d expect, and richly detailed, complete with utility belt, armour plates and fake abs – the props will appreciate the latter!

What’s also interesting is that they appear to have gone for a more overtly comic-book look here, in contrast to the recent NRL Marvel Heroes designs, which had a more realistic 3D effect. These jerseys look like they’ve been hand-drawn, ripped straight out of the pages of a comic book.

One thing we also love, and we can’t state this enough, is that the Ospreys have officially started referring to this shirt as the ‘BatJersey’ – thus joining the ranks of legendary Bat-portmanteaus such as the Batmobile, the Batphone, and of course, the Batladder…

The Ospreys will run out in the Batjersey for the first time in their derby game against the Cardiff Blues on 27 November, and will wear the shirts again for one of the Welsh derbies over the Christmas period (the specific one is TBC). After that, the match shirts will be auctioned off for charity, which we’re sure the ever philanthropic Bruce Wayne would approve of.

There are two more DC Superhero jerseys to come from BLK – Connacht will be becoming the Green Lantern, and Toulouse will, er, also be Batman (because as the saying goes, if you can be Batman, ALWAYS BE BATMAN), but this is a cracking way to welcome the superhero jersey concept to the Northern Hemisphere.