The Auckland Nines tournament is a relatively new addition to the NRL calendar, but this two-day festival of short-form rugby league has proved exciting and popular. Just like its union cousin, Sevens, Nines is also a showcase for some of the most outrageous shirts in all of rugby. With the 2016 tournament less than three weeks away, let’s see what the clubs have come up with this time around… 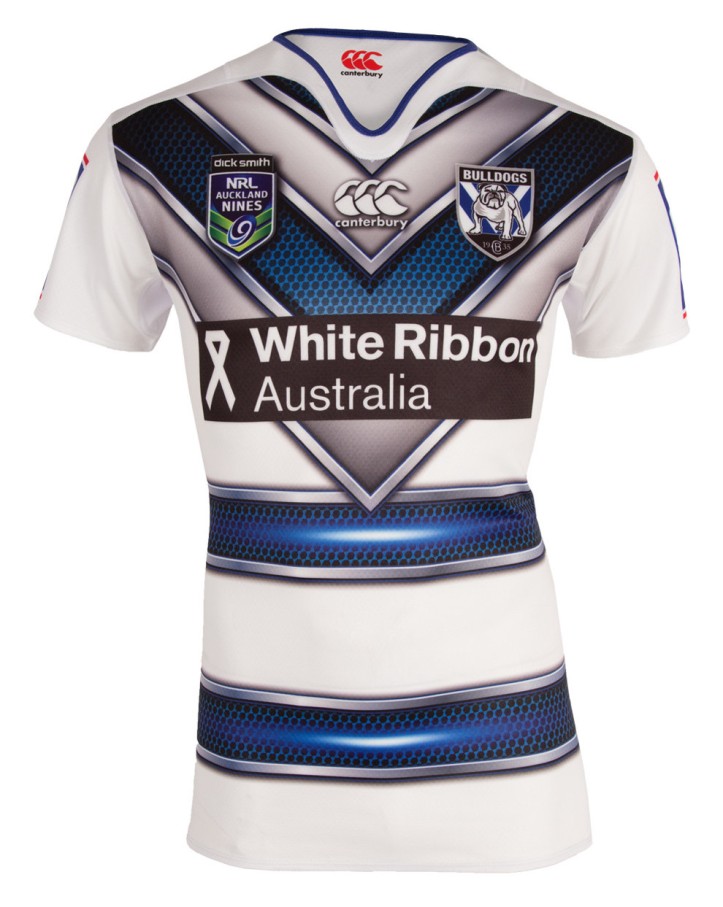 The Bulldogs went for a very literal and batshit 2015 jersey, but this is a much more classy affair. Hang on, classy? Are we quite sure this is a Nines shirt?

Yup, and this lovely combo of hoops, a chevron and futuristic-looking honeycomb pattern is as distinctive and unusual as it is sleek and classy. 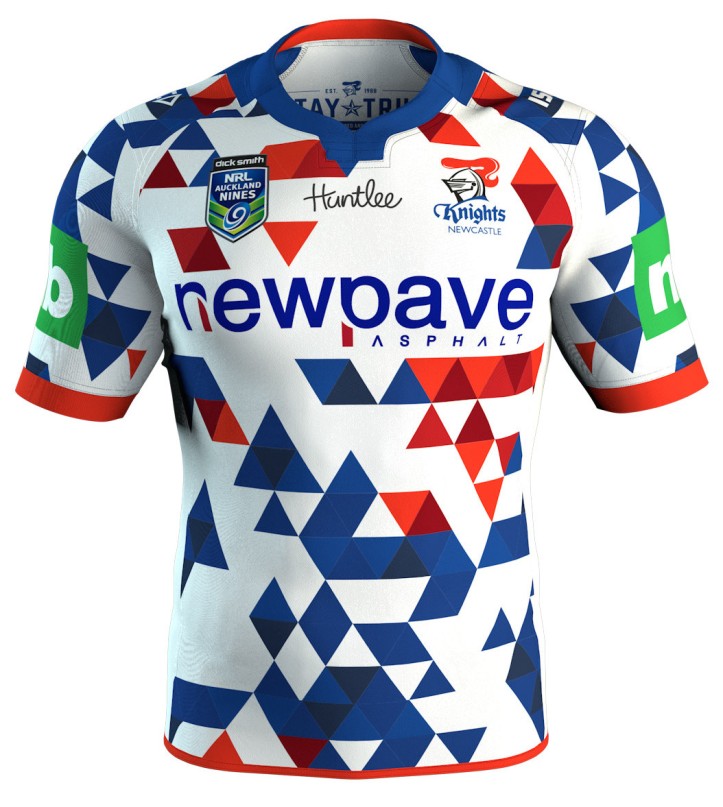 Now this is more like it! The Knights absolutely mental multi-coloured triangle pattern is somewhat reminiscent of the England Sevens shirt from a few seasons ago, but with the triangle factor ramped up considerably.

Maybe the triangle-happy designers have been playing a bit too much Starfox on the Super Nintendo? 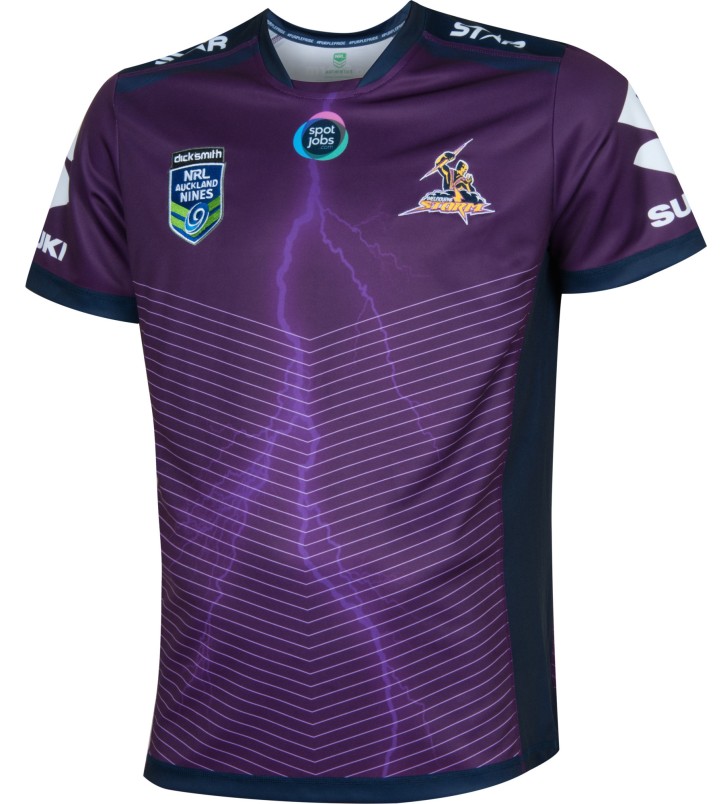 New supplier Star Athletic has kept things very literal on their first Auckland Nines shirt, but that’s no bad thing at all.

With the literally giant lightning storm running down the front of the jersey, combined with the pinstriped chevron effect on the front, it creates another classy but eye-catching design. 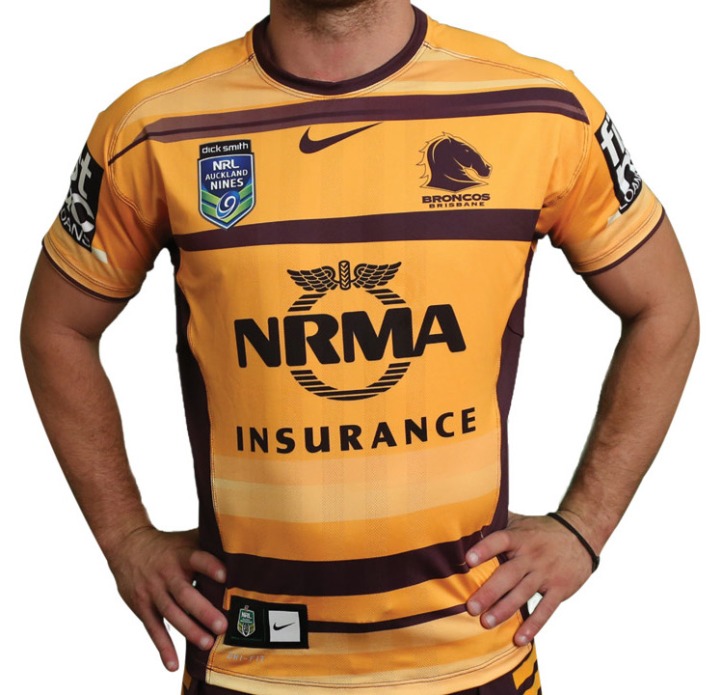 Yet another gorgeous Nike shirt for the men from Brisbane, and it’s another design that feels both modern and classic at the same time.

The yellow looks great complemented by he irregular maroon bands, while the lighter yellow stripes give further dynamism to what’s a really original shirt. 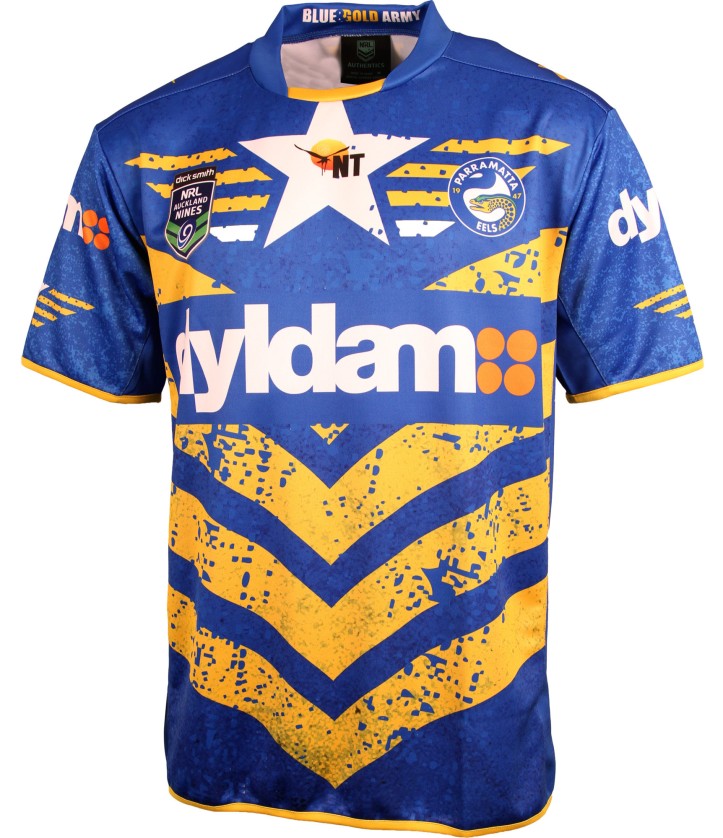 The Eels had a hideously eel-y shirt in 2015, but this is something altogether more confusing. The marking are vaguely military in their vibe, with a weathered look that makes it kinda look like an extremely visible tank or something.

What’s that got to do with the Eels? We’ve no idea, but on the plus side it looks pretty cool! 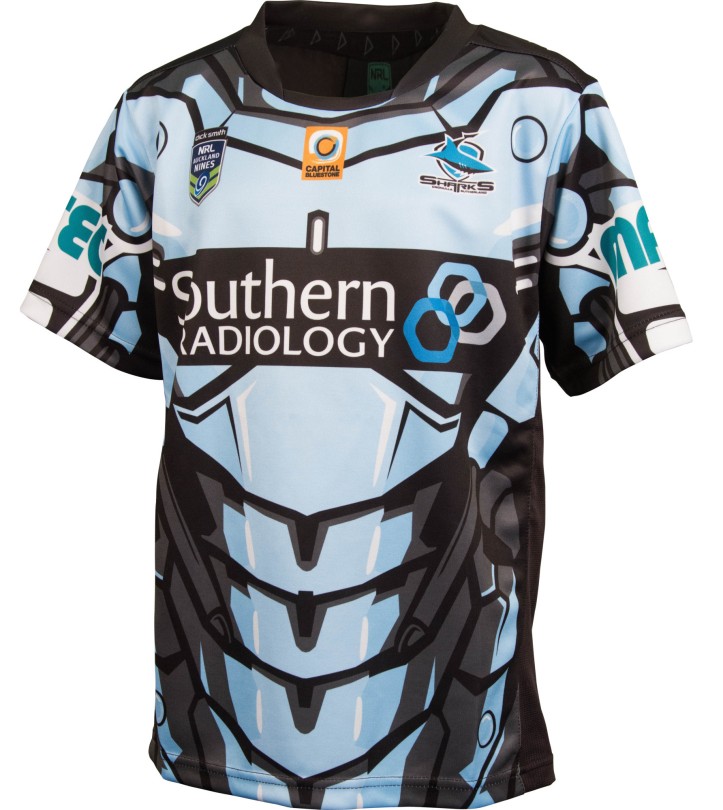 Another team with a shirt that’s slightly incongruous, with the Sharks opting for a decidedly un-sharky futuristic armour look.

And when you think about it, what’s even more intimidating than a shark? That’s right – a shark in futuristic armour. 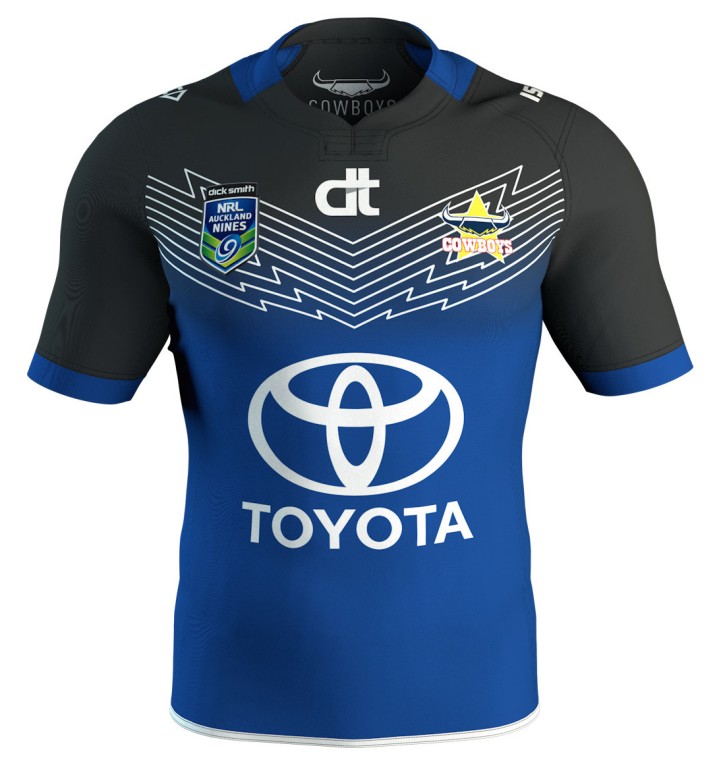 The reigning NRL Champions also have one of the coolest, most striking shirts in the Nines.

The black and blue shirt is nice enough, but the addition of the jagged pinstriped chevron across the chest really lifts it. Cool. 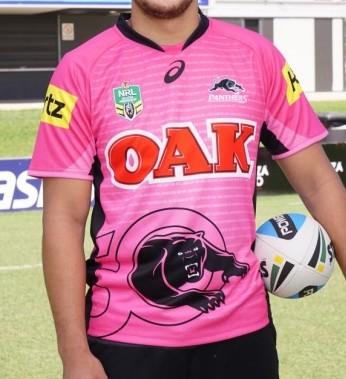 Did you know it was the Panthers’ 50th anniversary this year? If you didn’t they’re keen to remind you, by sticking a giant ’50’ on the front of their shirt and having their slightly deformed-looking panther crawl out of it like he’s having a really shit day at an outdoor pursuits centre.

Oh and it’s pink and stripey, just to further enhance matters. No. 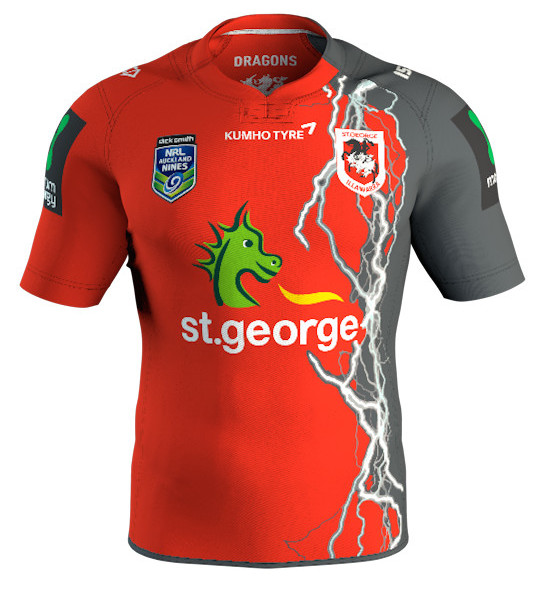 Another cool shirt with a load of lightning on it – we’re starting to notice a trend here… the electricity isn’t as appropriate as it was with the storm, of course, but we really like the 3/4 red 1/4 grey effect.

As ever, it’s a pity about that stupid dragon, though. 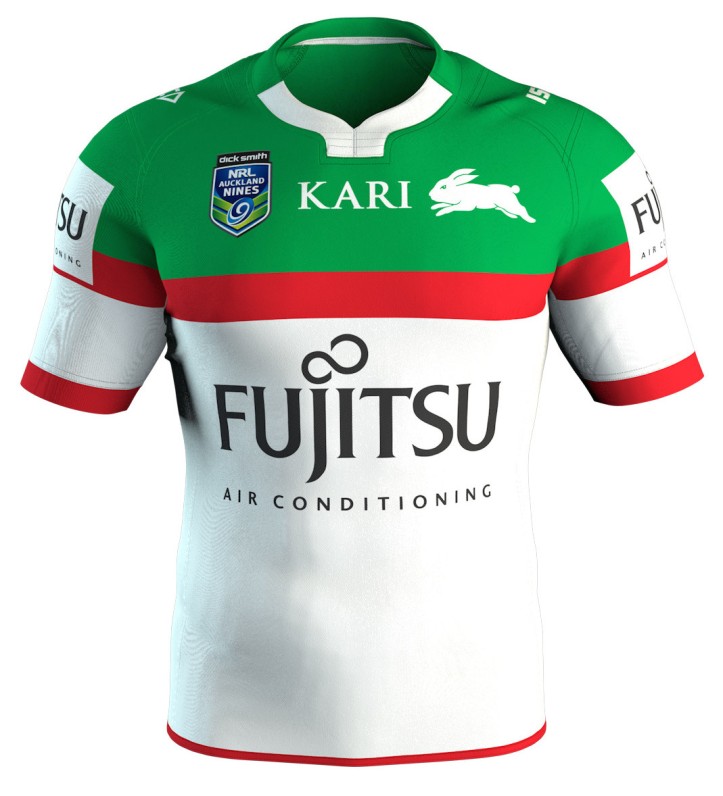 The Rabbitohs won the 2015 Auckland Nines, and they’ll be looking to repeat the feat wearing one of the coolest, classiest shirts in the tournament.

The green and white design is really striking, and the red bands only serve to enhance what’s an absolutely beautiful design. 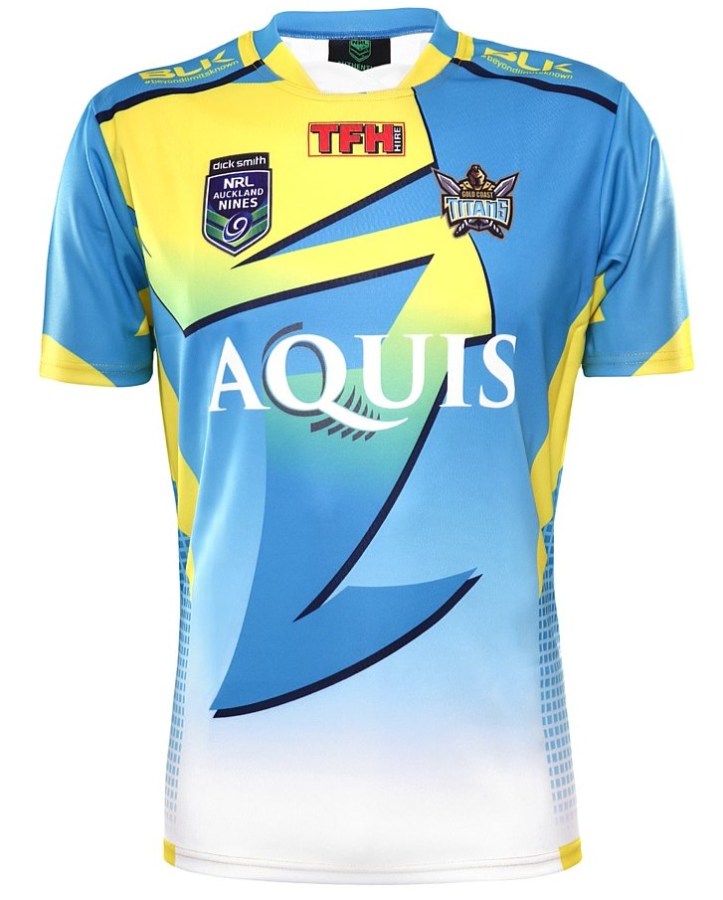 The Titans 2016 shirt is kinda like one of those optical illusions – you nee to look at it a while to see what the weird jagged blue and yellow squiggle on the front is.

Eventually, you’ll hopefully come to see that it’s an abstract version of the warrior’s helmet from the Titans’s badge. 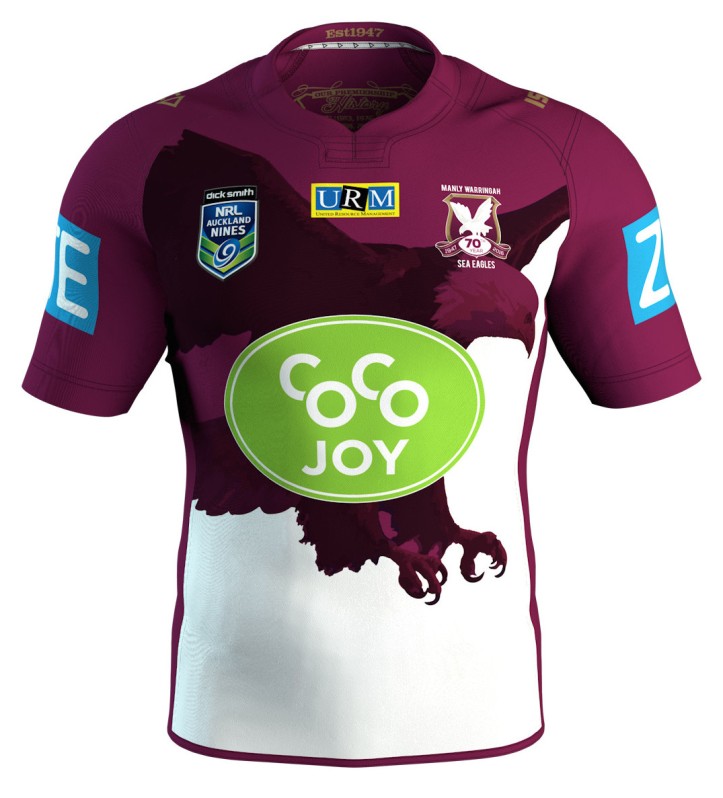 The Sea Eagles are celebrating a big anniversary just like the Panthers, but unlike Penrith, they’re marking 75 years in much more subtle style.

We love the way that the majestic sea eagle in flight divides the top and bottom halves of this shirt – it’s bold and classy all at the same time. 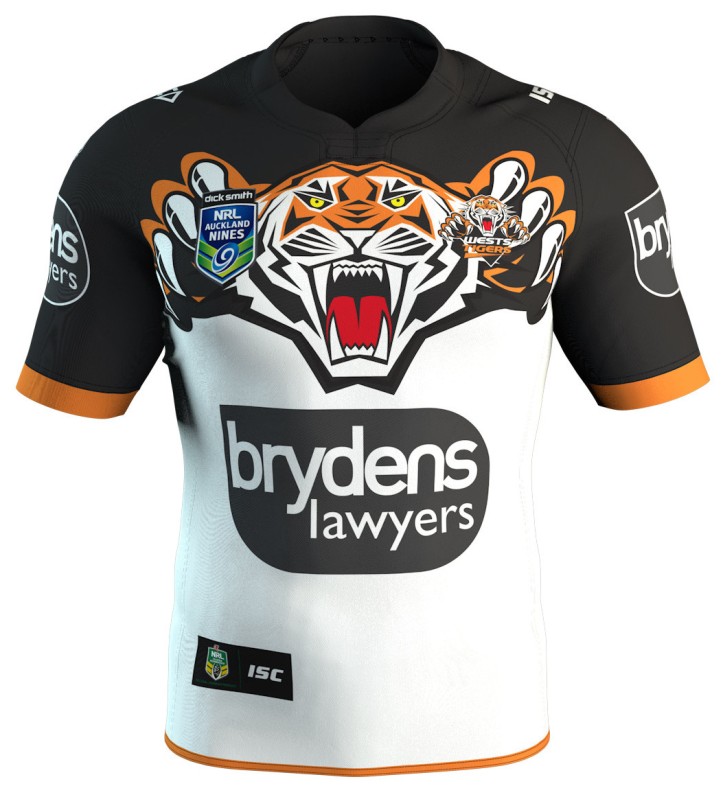 Now, this might well be our favourite shirt in the whole Auckland Nines this year. Just look at it!

The white and black looks absolutely great and striking, and then you have the two sections divided by the giant snarling visage of the Wests Tigers club badge. Brilliant. 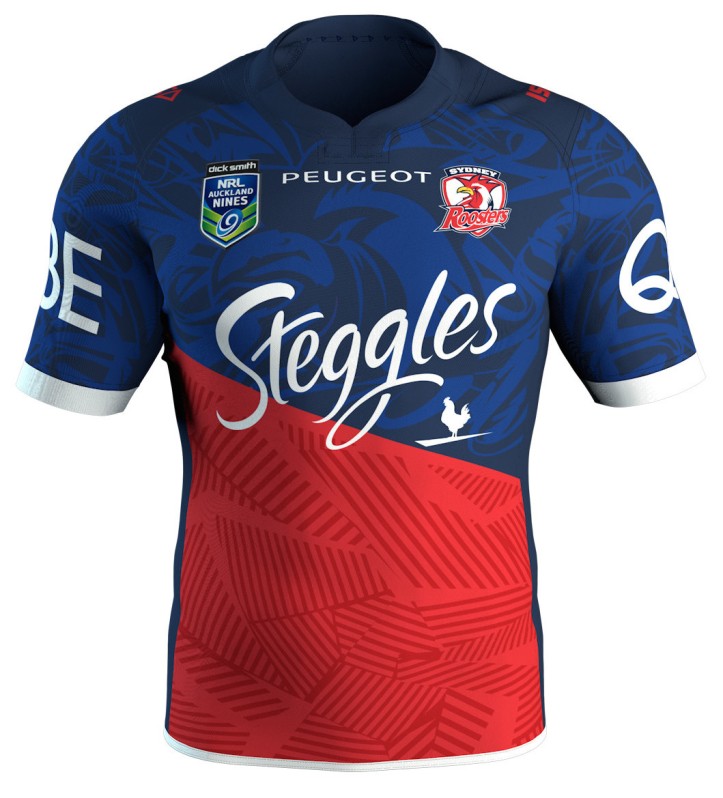 The diagonal divide is very in this season, clearly, and this one pulls of the trick in such beautiful fashion, with the red/blue contrast proving so striking.

We also love the way that the pattern on the bottom and top contrasts the head and feathers of the rooster, adding a splash of Nines lunacy. 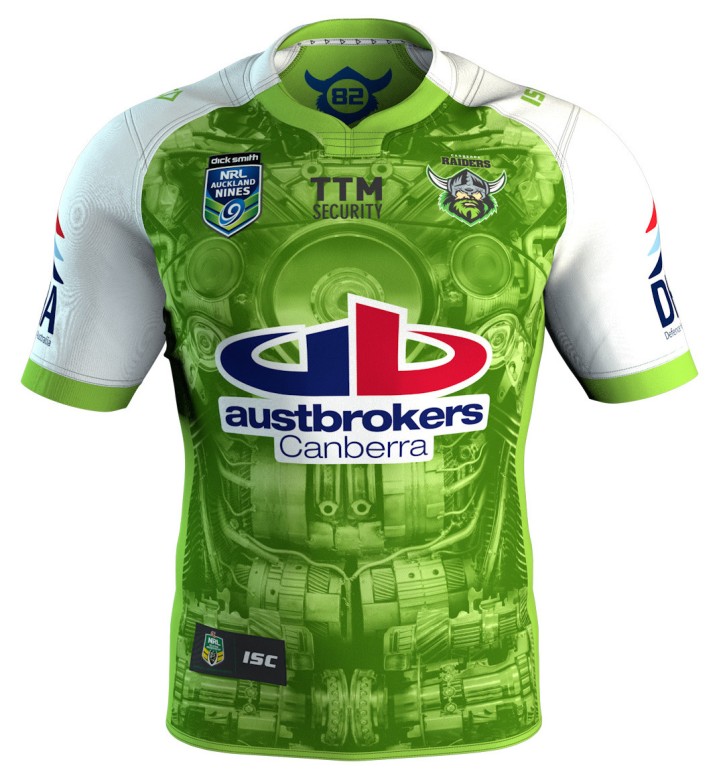 The Raiders have taken an ‘if it ain’t broke’ approach with their 2015, opting for the same intricate sublimated design that’s a very literal interpretation of the club’s ‘Green Machine’ nickname.

Nice? Well, in its own garish way, yes, but it’s a little disappointing for the Raiders to not try something new this year. 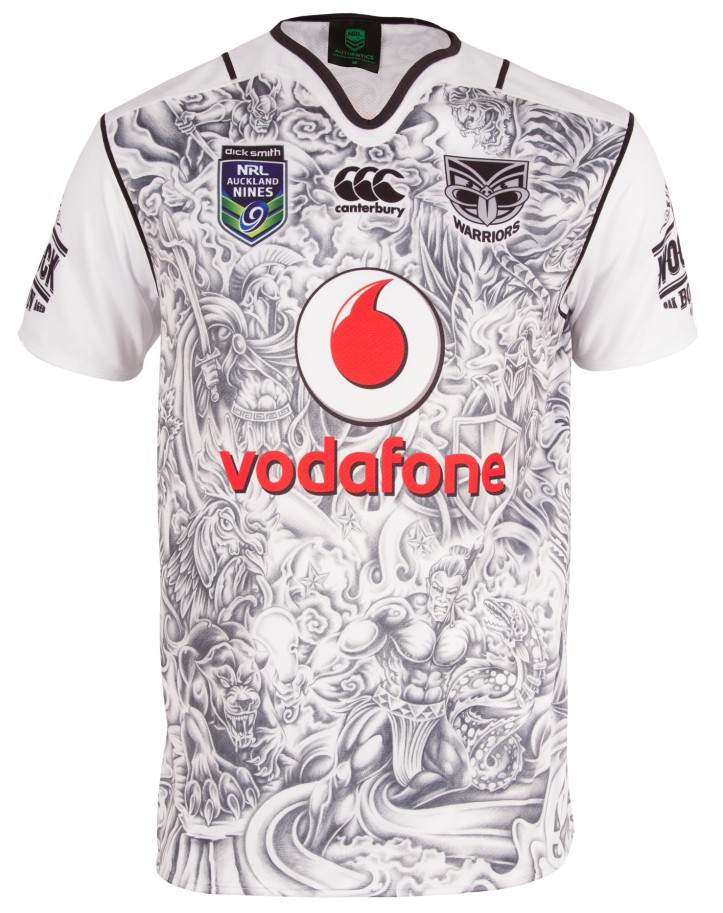 Regardless of how they do in the tournament, the Warriors can always be relied upon to have an absolutely jaw-dropping Nines shirt, and this year is no exception.

The ‘Spirit Of The Warrior’ jersey celebrates all 16 NRL teams being together in one place for the only time in the season by depicting all of the clubs’ logos/mascots in an incredibly intricate tattoo-inspired design.

Take a closer look, and you can start spotting them, like a weird rugby Where’s Wally?

Every year, the Warriors set the standard for awesome Nines shirts, and this year might be the most incredible yet.