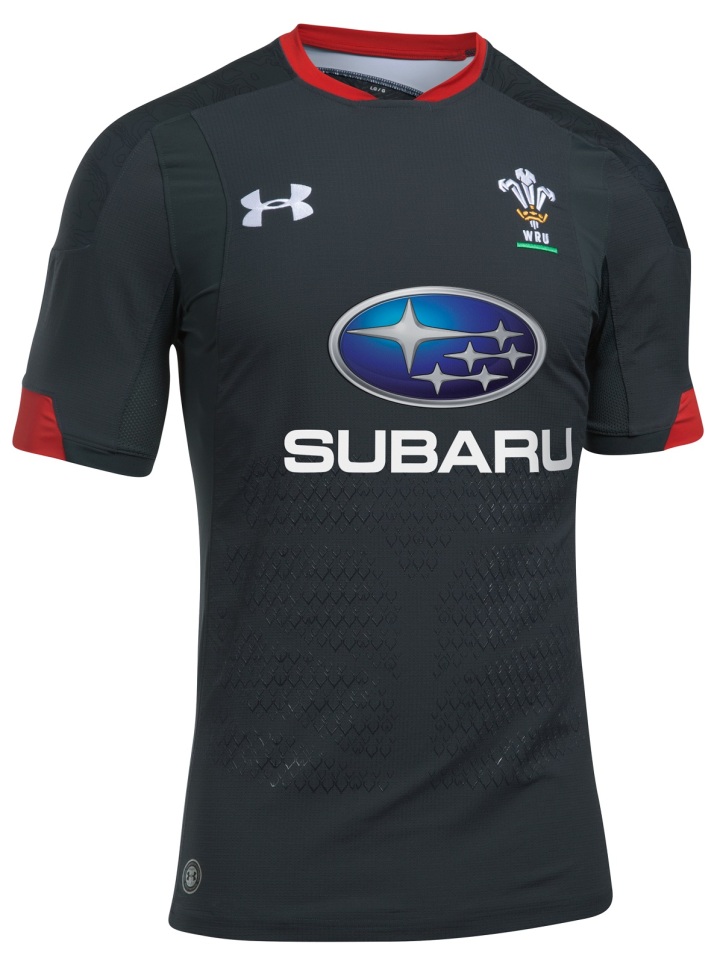 Over the last few years, Wales have used the ‘other’ November international – ie the one that isn’t against one of the big Southern Hemisphere teams – as the occasion to launch and wear their alternate jersey, and it’s no different this time around. Wales actually have quite a lot of cause to wear alternate shirts as a fair number of other teams play in red, and this year’s game against Georgia is no different – it’s World Rugby protocol for the home side to switch in test rugby and so Wales will be going dark once again.

Just like the 2015/17 change shirt, the WRU calls the main colour of this year’s design ‘Anthracite’ – it depends on the lighting of course but to us this year’s shade looks a little bit lighter and more grey than last year’s design, but it’s still a nice shade.

As with the new Wales home shirt, the topographic design has been used on the shoulders here – again each one is unique, and if anything it’s a little more visible here, and it works well with the red accents on the collars and the sleeves.

The most notable facet of this shirt, however, is probably the new sponsor – in an unexpected move, the WRU has swapped out new main sponsor Isuzu for Subaru. This is because the WRU’s sponsorship deal is actually with the IM Group – an automotive importer that deals with both brands in the UK.

It’s an innovative and unusual move – particularly for test rugby – but it’s not something that bothers us too much, especially given that the logo doesn’t clash too badly with the rest of the design. Yes, it’s a little bigger than we’d like ideally, but it’s not too over the top.

All in all, this is a nice, sleek shirt that sits nicely with the home shirt and avoids the mistakes of garish Wales change shirts past.