Ulster and Kukri have been together for a long time now, and it’s a relationship characterised by consistently decent shirts, albeit ones that don’t necessarily set your pulses racing. The home shirt Ulster wore for the last two seasons is a textbook example of that – perfectly nice, but not exactly memorable either, and the 2017/18 carries on that theme, albeit with some definite improvements. 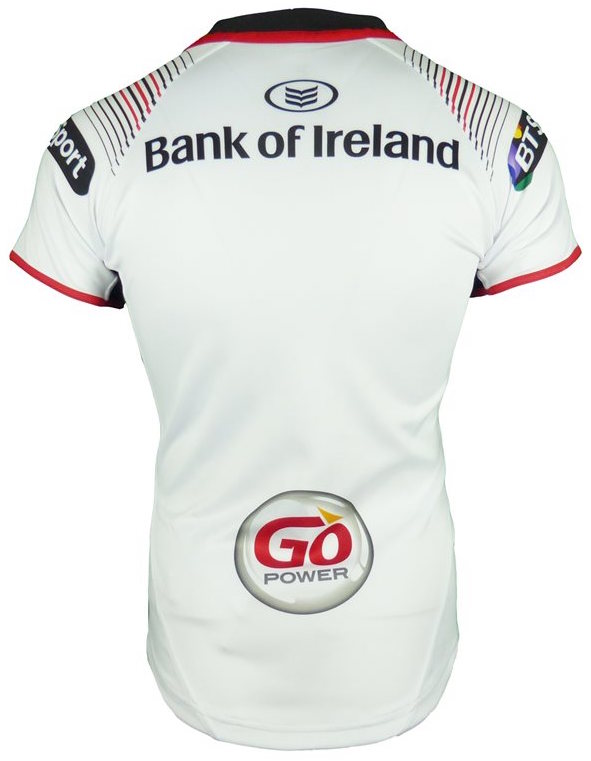 For the last few years, Kukri has gone fairly minimal in its use of the black third colour in their home shirts, but this season it’s back with a bang, being used in prominent black side panels, as well as the collar.

The most striking aspect of this shirt however, is the pinstriped pattern, which again brings another significant black element into the shirt, along with a bit of red.

As if you needed any more reminding that black was back for Ulster this year, we need only turn your attention to the away shirt, which eschews the recent preference of bright colours for something much more restrained.

It’s a simple colour-swap of the home shirt other than that, with sky blue used as a very handsome contrast colour.

It looks great – perhaps even better than the home shirt – a fact that’s further enhanced by the always welcome decision to put the sponsor logos in the same shade of blue to make things hang together very well.

Ulster’s jersey story always seems to be about evolution as opposed to revolution, and these shirts do feel like another example of this. Clean and classy with some nice little touches, they’re another really lovely pairing from Kukri.