How do you follow one of the most stunning jerseys ever made? That’s the dilemma facing Adidas and Quins this season after last year’s absolute worldie of a 150th Anniversary design. But try they must…

The new Quins home shirt returns us to the classic blue, red, brown and grey colours after last season’s washed out retro palette, but things are are definitely a little bit out of the ordinary here. 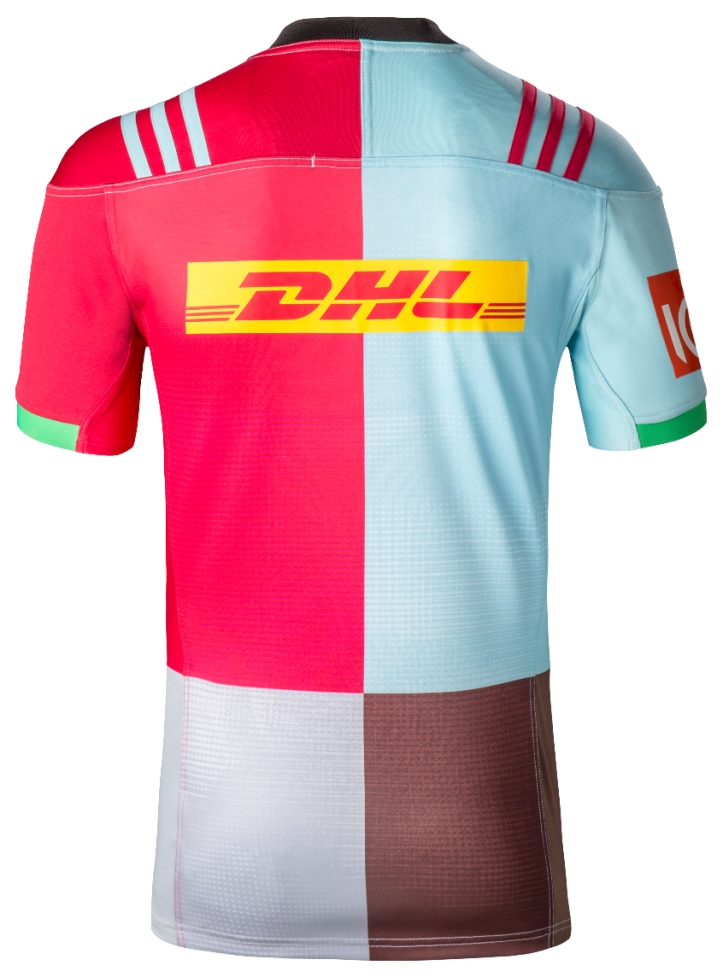 Quins opted for uneven quarters for the 2015/16 shirt, but here Adidas has opted to flip them the other way, with much larger top quarters than the bottom ones.

Why? Well this year’s home shirt is purportedly inspired by the tailors of London’s Savile Row, and as such they want the 17/18 home kit to feel like one garment from top to bottom.

In practice that means half and half shorts and socks that match the bottom quarters of the shirt, which definitely makes it feel more balanced, but we’re not entirely sure it doesn’t look a bit like pyjamas…

Since they took over the Quins contract in 2014, the away shirt is where Adidas has always pulled out all the stops to be bold, modern and different – and this year is no different, albeit with a familiar feel.

You may recall the New Zealand Super Rugby wearing similar looking ‘territory’ jerseys for their matches against the British & Irish Lions last month and that theme has been transferred to another hemisphere here.

But instead of the provinces of New Zealand, here we have the various boroughs of London represented in a distressed map, with certain areas highlighted in Quins’ light blue colour.

While neither of these jerseys are exactly traditional, in their own way we actually really like both of these shirts.

The home shirt looks a bit odd by itself, but it’s a nice design, and the effect with the shorts and socks added in is certainly unique. The away shirt, however, while a bit similar to the Tour Edition jerseys, is a very cool design indeed. All in all, it might not be as crowd-pleasing as last year, but it’s not a bad effort at all.