NRL side Gold Coast Titans have revealed the jersey they’ll wear for the 2017 Indigenous Round, which takes place this weekend.

The jersey is the first totally bespoke design for the Titans from Classic Sportswear, after the supplier took over from BLK at the last minute before the start of the season – Classic’s home, away and 9s jerseys were basically re-badged BLK designs.

The 2017 Indigenous jersey is AVAILABLE NOW. Designed by the legendary Preston Campbell, you can purchase yours now: https://t.co/YWVRyOrSnj pic.twitter.com/t81Fl4vywe

The Indigenous shirt has been designed by former Titans player, Preston Campbell, who has received accolades for his tireless work in the indigenous community, and he’s created a very cool variation on the classic rugby league chevron that uses Aboriginal patterns and colours.

The theme of the jersey is ‘connection’ – which is both a key skill of Aboriginal culture and a vital component of a team environment. 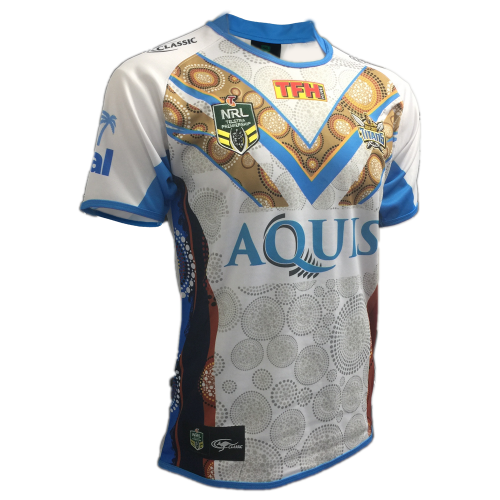 The new shirt will be worn by the Titans for two matches – Round 10 against the Melbourne Storm at Suncorp Stadium before then wearing it in the home fixture in Round 11 against the Sea-Eagles.