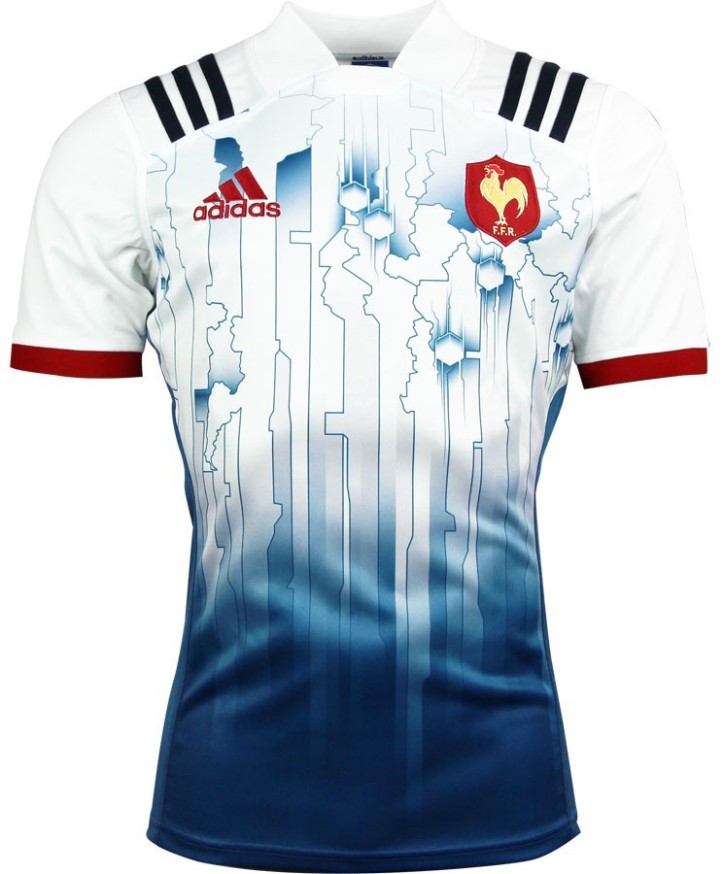 Despite being a core team on the World Rugby Sevens Series since 1999, France have never really set the world alight in the short form of the game. However, for the last few years its felt as though Les Bleues were building something, and on the back of a quarter-final appearance in last summer’s Olympics they’ll go into the 2016/17 season with some momentum… and one of the most original and interesting new shirts we’ve seen in ages.

Over the last few years, Adidas have established themselves as the kings of the boundary-pushing, ultra-modern jersey design, and given the absolutely wild things they’ve brought to their 15s international and domestic jerseys in the last few years, it’s no surprise that when it comes to the sevens, they’re going to try and outdo even their previous batshit mental efforts… job done? 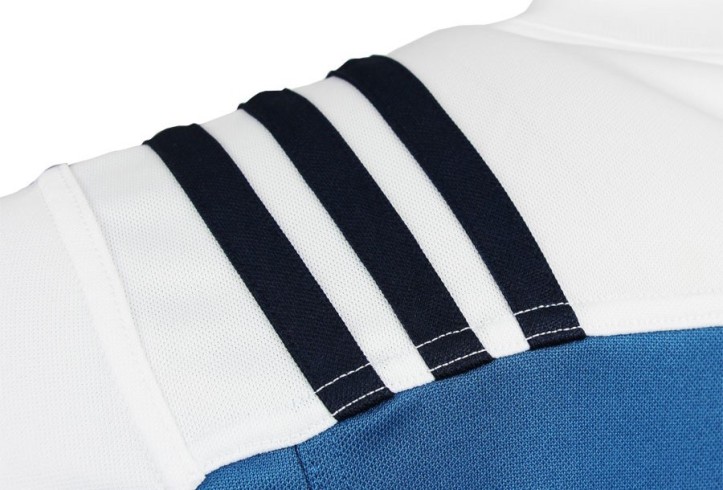 Let’s get the basics out of the way first. This is a France primary jersey, but unlike pretty much every France home jersey there ever has been before, this one isn’t exactly what you’d call blue… at least from the front. Yes, while the bottom and rear of the jersey are the traditional French blue (as are the shorts and socks) the main body and shoulders of the shirt are very much white. It’s a bit of a break from the norm, but we think Les Blues actually look better when they wear their away jerseys anyway, so we’re all for the change.

But of course, the front of the shirt isn’t just plain white – this is Adidas, and this is the sevens, and they were never going to miss out on an opportunity to do something truly bonkers here. On first glance you might assume that the eye-catching angular graphic across the front of the jersey is some sort of throwback to the equally striking new France 15s home shirt. Not so. 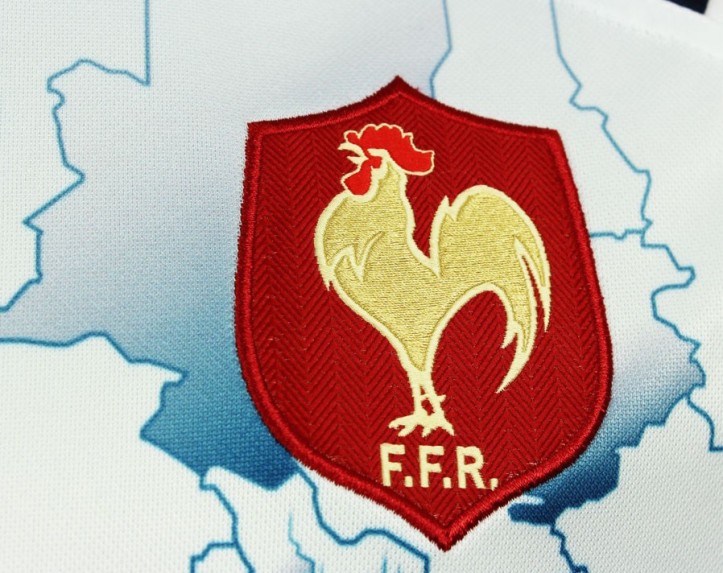 No, upon closer inspection you’ll see that it’s in fact a very stylised map of the globe, with the lines running down the length of the design representing the various time zones that the world has been carved up into. It’s not just a pretty picture either – the map is designed to convey the globe-trotting nature of the World Rugby Sevens circuit, and this point is emphasised further with markers on the map representing all sevens stops on the 2017 series, with Paris of course smack bang in the middle.

But a striking graphic isn’t the only thing that raises the eyebrows on this shirt – a closer look at the players’ jersey reveals that the material has an interesting ‘digitally woven’ graphic that’s very similar to the ‘Triaxle’ design used on the new All Blacks jerseys, and along with a new collar design that it’s very similar to the one the All Blacks ‘adaptive’ design, with its ribbed, elasticated, trapezius-hugging low profile look, it creates an interesting conundrum. 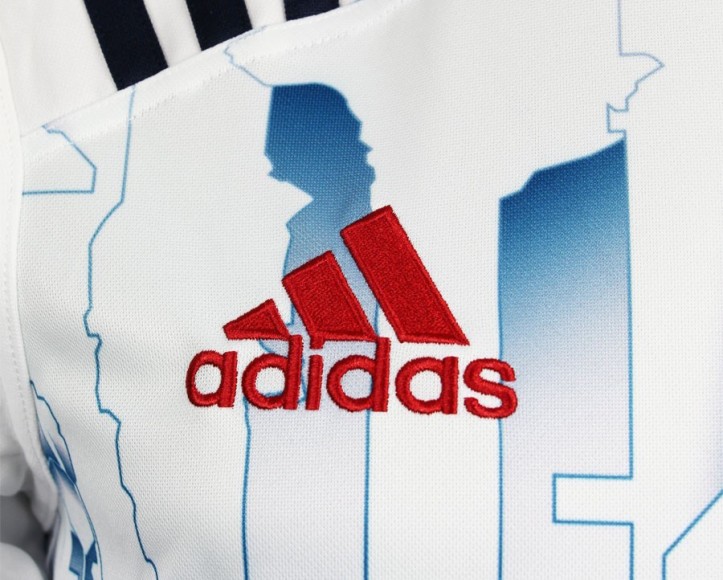 As we’ve mentioned before, Adidas and the All Blacks have an agreement that New Zealand gets first dibs and exclusivity on all of Adidas’s latest tech for a certain period of time – this is why the All Blacks will always wear the latest Adidas jersey template before anyone else, and it won’t filter down to the rest of Adidas’ supplied teams until a few months (or even a whole season) later.

So, how come lowly France Sevens not only have access to the new digital weave jerseys with the new collar design when not only are the full France 15s side are still using the old template for their new shirt, but so are the All Blacks Sevens!? It’s a curious mystery, but one that also creates an interesting little wrinkle for us shirt design nerds to get our teeth stuck into. 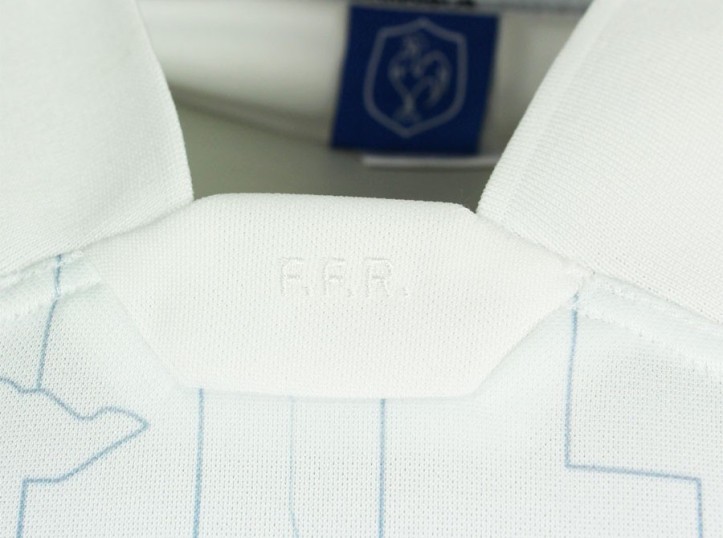 We mentioned the collar on the new shirt was ‘similar’ to the one used on the new All Blacks’ jerseys, and that’s true – but unusually for Adidas, they’re not identical. Both 2017 New Zealand shirts have a V-shaped cutout on the front panel, while this has a raised six-sided insert embossed with the FFR initials. Now, that’s odd because Adidas generally doesn’t do this – their templates almost always have one distinctive collar for each template, and there’s little or no variation there. In fact the only example of a shirt in the 2014-16 template breaking from that rule is this year’s obviously unconventional Quins 150th Anniversary design.

Here however, in just the third example of this shirt template we’ve seen, the collar has had a pretty substantial change, so what gives? Well, it could be that Adidas is loosening up the design shackles a little this time around and teams will be able to choose from two (or maybe more) takes on this new design, or it could be that the V-insert design is an All Blacks exclusive – we’ll know more when more teams start using the template over the next year or so. 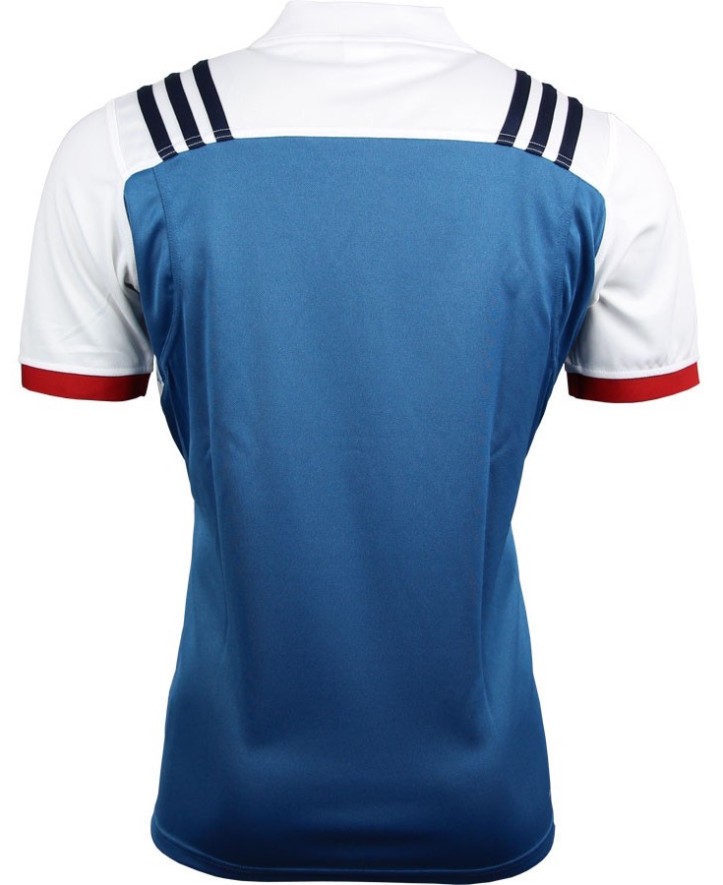 France aren’t the most high-profile team on the World Rugby Sevens circuit, but for the last few seasons they’ve been turning heads with their boundary-pushing jerseys that give us exactly the level of weirdness and lunacy we’ve come to expect from the shortened form of the game.

The 2016/17 vintage ups the ante, not just being a totally off the wall design in itself, but also being a bit of a design mystery for the unrepentant shirt nerds out there – and as terminal suffers of that particular malady, we can only applaud.