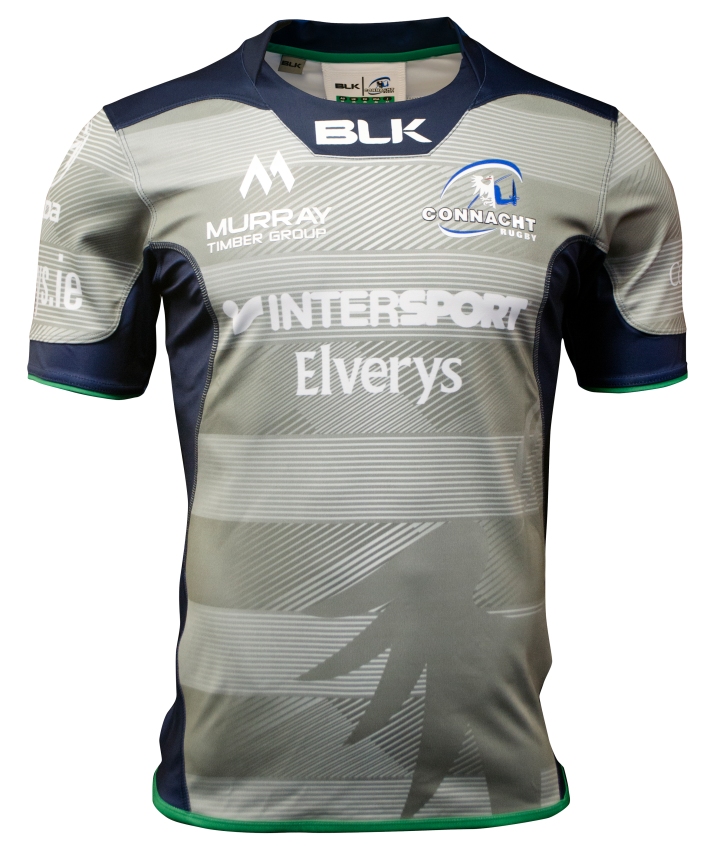 It still feels slightly weird to type ‘reigning Pro12 champions Connacht’, such was the wonderfully improbable and unexpected nature of the Galway province’s league win last season, but champions they are – and with their new home shirt, BLK certainly gave them a jersey worthy of the top dogs.

This new away shirt is a slight variation on the hooped theme we liked so much on the home shirt. Once again the hoops are that subtle tonal style that we’ve seen in designs from loads of different brands and teams, but done in oh-so trendy light grey to boot.

You’ll notice that there’s five pinstriped hoops on show here, and there’s a reason for that, as they represent the five counties of Connacht – Galway, Leitrim, Mayo, Roscommon and Sligo – a theme we also saw used in slightly more on the nose style for last year’s away shirt.

Other than that, it’s all very subtle and classy – there’s an extra touch on the bottom half of the design, where a Connacht eagle breaks up the hoops in subtle style, and we really like the thin green piping around the sleeve cuffs and the bottom hem, too.

Now, dark blue has always been the Connacht secondary colour, but BLK’s decision to reflect this in last season’s home shirt by making the entire back of the jersey blue, with the front green, was polarising to say the least.

So, quite how they’re going to react to this away shirt, with its grey front and solid blue back we’re not sure, but we’re going to nail our colours to the mast and say, in this instance, it works, really well.

Unlike last season’s home design, where the blue came out of nowhere and almost looked like a different shirt from the back than it did at the front, here things feel a lot more blended, thanks to the prominent blue side panels and underarms, combined with the blue collar and shoulder area.

All in all, it’s a very cool, very individual design, that still feels like a nice companion to the home shirt – a shirt worthy of the champs indeed.