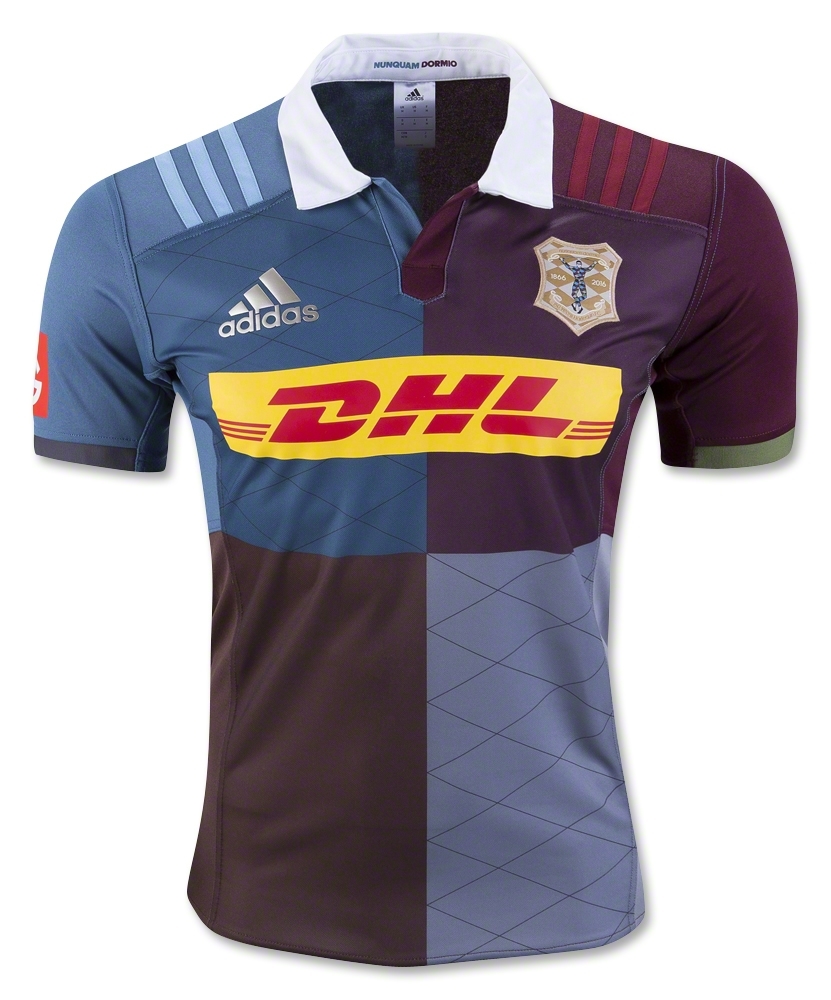 Harlequin FC are one of the most famous and oldest clubs in the Aviva Premiership, and as just the third club in the Premiership to reach its sesquicentennial year (that’s 150 in case you hadn’t read the headline) they’ve got plenty of cause to celebrate. And what better way to celebrate a club’s 150th anniversary with a very unique and very different pair of jerseys?

Adidas doesn’t really do ‘retro’ like other suppliers – as anyone who’s checked out this year’s New Zealand Super Rugby shirts will know very well – but the 150th Anniversary Quins home shirt is about as retro as they come, and what a shirt it is, too. 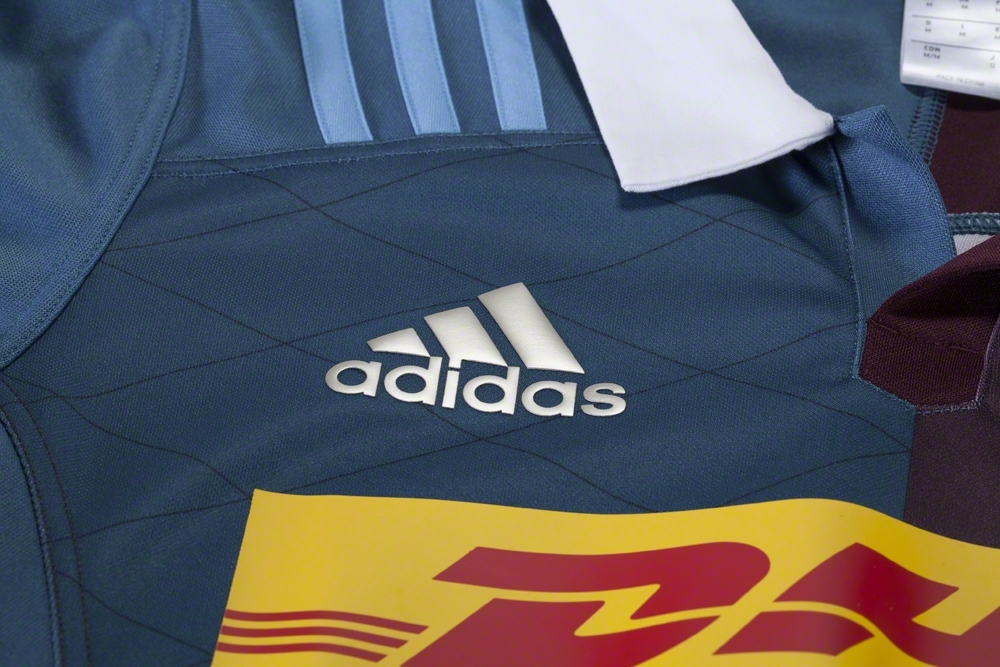 The inspiration for this shirt is very specific – it comes from a very early team photo, back from when the club was still known as Hampstead Football Club, that was found in the Quins archives. This photo was then, and we quote, “put through advanced computer imaging software to convert the black and white photo into full colour” and the colours then used to inform the look of the 150th anniversary home shirt.

Now, we’re no digital imaging experts, but that sounds to us like made up marketing nonsense used as an excuse to give the Quins sometimes gaudy colour scheme a washed out, retro feel – and yet do we care? Not one bit.

The darker red and the deeper, almost teal blue quarters work so much better with the grey and brown than the regular colours do, in our opinion, and it’s further enhanced by two other clever historical nods – the diamond ‘harlequin’ pattern on the grey and blue quarters, and most satisfyingly of all, a proper old-school polo collar – as seen on the shirts in that 1866 team photo.

Harlequins shirts can sometimes look a bit of a mess – getting all those colours to work together is no mean feat, and in the last decade the club hasn’t always hit the mark. Adidas knows what it’s doing with rugby shirts, however, and while the brand doesn’t usually do retro, clearly when the designers at Herzogenaurach try their hand to it, the results are pretty spectacular.

The 150th Anniversary away shirt on the other hand is as modern and unconventional as the home is retro and classic. Indeed, that’s exactly the message behind these shirts as a tandem – the home salutes the club’s past, while the away reflects Harlequins the professional 21st Century rugby club.

It’s certainly not for the traditionalists, which is very much the point, and it’s incredibly striking – using the very modern shades of red, blue and white in messy diagonal sections across the jersey front, with a jagged angular bleeds cutting into one another. 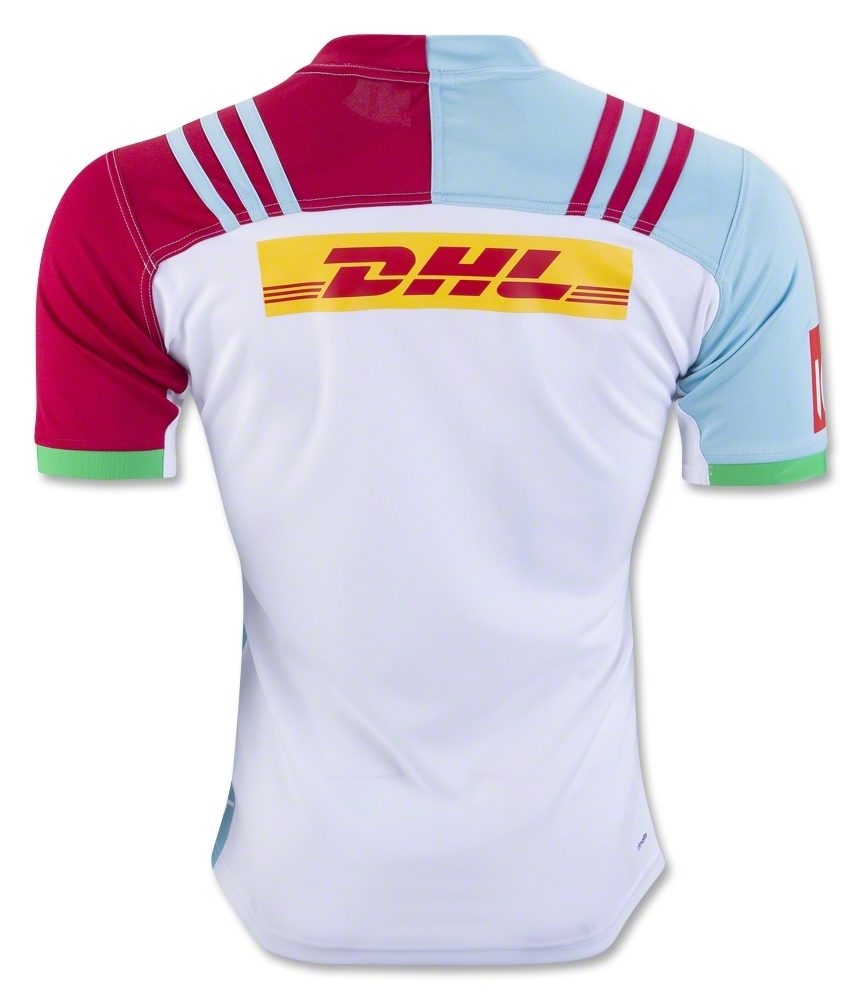 The jagged, angular bleed almost have the the feel of a pixelated image, or perhaps even ultra-modern ‘digital’ camouflage (though crucially, it isn’t actually camo, you know how we feel about that) and while it’s not for the faint of heart, we think it looks very cool – if Tron made a rugby shirt, this would be how it would look.

It’s not all bleeding edge modernity on this away shirt, however, as it sports the club’s rather natty 15oth anniversary crest, just like the home shirt – albeit rendered in silver here instead of the home’s brushed gold.

The crest is a rather lovely thing, if we do say so ourselves – it has a suitably grandness and gravitas, and it actually hides another clever nod to the history of the club.

The heraldic shape of the crest isn’t just there to make it look old-school, it’s a shape that you’ll see in various places around the Stoop – from the honours cap to the captain’s board. It’s a cool little touch that further showcases Adidas’ attention to the little details.

A club’s 150th anniversary is a massive occasion, and one that deserves a jersey that pulls out all the stops. With both the home and away shirts, we think Adidas has absolutely killed it here, and we reckon many fans won’t want to wave these designs goodbye when Quins’ 151st year kicks off!