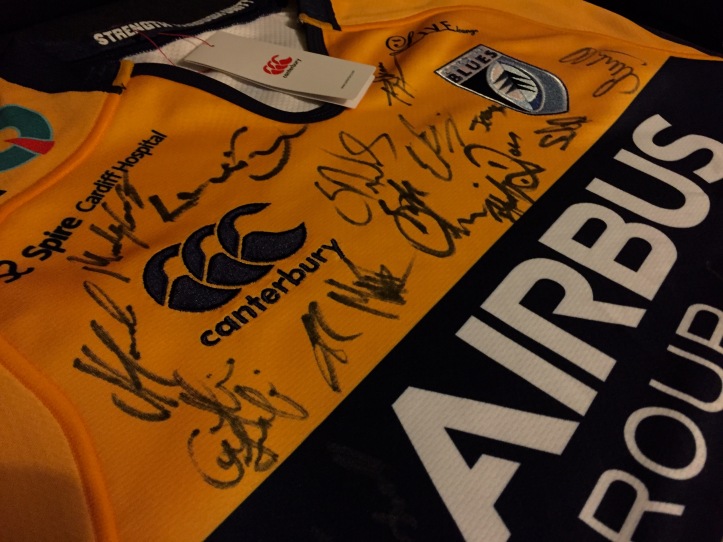 Fancy bagging yourself a Cardiff Blues #StayStrongForOws European shirt signed by the entire Blues squad, courtesy of Canterbury, and do your good deed for the day, too? Read on to find out how this unique jersey could be yours…

As we explained when we reviewed it back at the start of the season, the Cardiff Blues 2016 European shirt isn’t just an absolutely beautiful, unusual jersey, it’s also raising awareness and funds for former Blues and Wales centre Owen Williams, who suffered a serious spinal injury while playing for Cardiff in 2014. 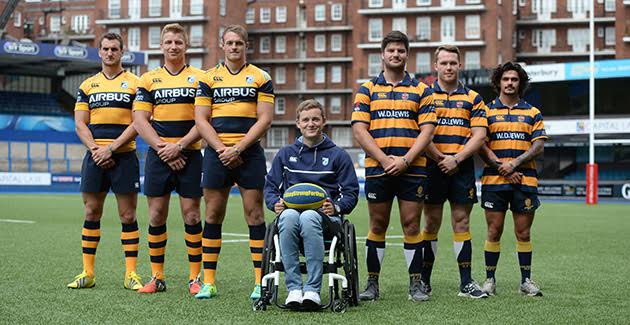 If you’re reading this, you probably already know all about Owen, about the outpouring of support and charity that became #StayStrongForOws, and you’ll probably also been touched and inspired by the courage and positivity he’s shown in his recovery.

It’s natural that the spotlight can’t be on his recovery forever, but while the accident might be far back in our memories now, the ramifications of that day will be with Williams for the rest of his life, and the #StayStrongForOws campaign is continuing to raise much-needed funds for Owen’s recovery, through the Welsh Rugby Charitable Trust. 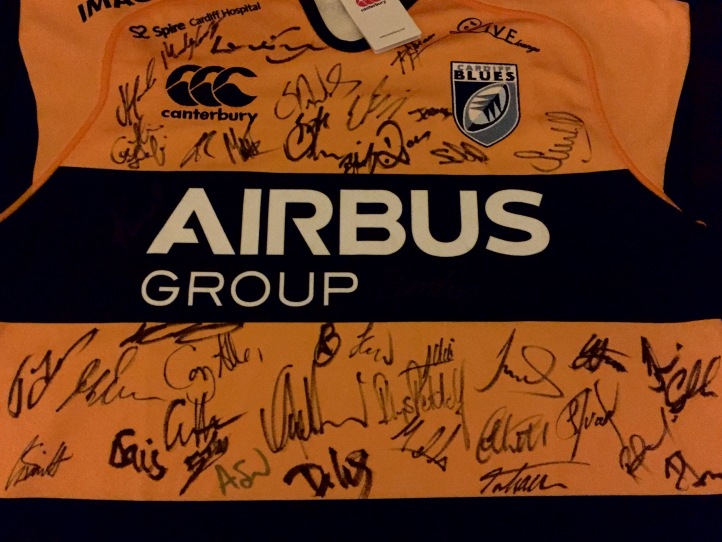 So what has that got to do with you?

Well, a few weeks back when our friends at Canterbury offered to send us a Cardiff Blues jersey signed by the entire squad – including Wales and Lions stars Sam Warburton, Gethin Jenkins and Alex Cuthbert – for us to give away, and we had an idea…

If you follow us on Twitter or Facebook, you’ll know we’ve given away a lot of shirts recently, and we’ll be giving away loads more in the next few weeks, too. So we decided that we didn’t want to just give this away to some random who RTs or Shares our post… we wanted to use it as an opportunity to do a bit of good, and support a great rugby cause.

So, to be in with a chance of winning this unique, money-can’t-buy bit of rugby memorabilia, we’re not asking you to answer a question, or share a post or any of that lark, instead we want you to put your hand in your pocket.

To be entered in to the draw to win the jersey, all you have to do is send us proof of a donation to #StayStrongForOws. Simple as that.

It’s just like entering the lottery, except you have an actual cat’s chance in hell of winning, and you don’t have to sit through a dreadful Saturday night TV catastrophe to find out the results – no brainer.

Donating couldn’t be easier: either text SSFO99 £_ to 70070 to donate an amount
of your choice – put the figure of your choice after the ‘£’ – or you can contribute to the #StayStrongForOws JustGiving page online.

Once you’ve done that, just take a screenshot of the confirmation text or email (like this), and send it to us on Twitter, Facebook, or email competitions@rugbyshirtwatch.com, and you’ll be entered in to the draw to win the shirt.

And that’s it! We don’t often break our facade of sarcasm and snark here at Rugby Shirt Watch, but #StayStrongForOws is a cause that has touched us profoundly, and one that we are passionate about supporting, so please, even if it’s just a quid – donate. It’ll take you seconds, and you might even win an awesome shirt, too!