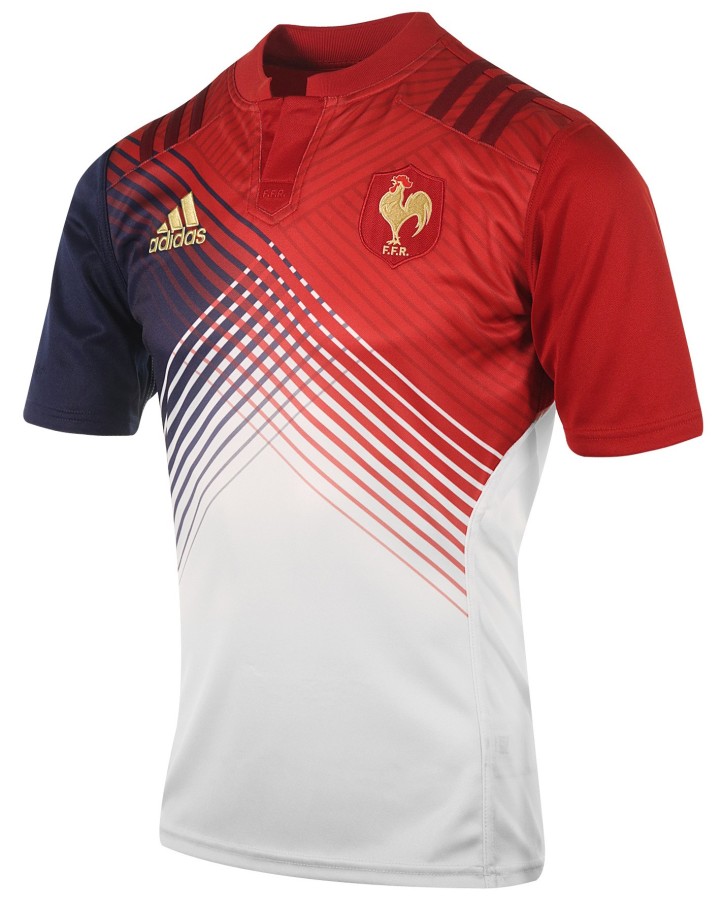 The Rugby World Cup might have been one of the lowest points in the history of French rugby. Les Bleus’ humiliation at the hands of the All Blacks in Cardiff was a brutal climax to the divisive tenure of Philippe Saint-André, and it also ensured that France’s unconventional red alternate shirt would hold nothing but the most bitter memories for France’s players and fans.

With the new broom of coach Guy Noves and a radical overhaul of the XV de France then, they couldn’t well trot out for their first game against Italy wearing the same shirt that still bore the scars of the Cardiff nadir, and so it’s no surprise that this brave new era for France comes complete with a revolutionary new change shirt.

France are one of those teams that always seems to get a lot of mileage out of their alternate jersey, and so the design better be something memorable and worthwhile… and you can’t really accuse Adidas of playing it safe here!

Yes, while on paper this might be a return to France’s more traditional white alternate, the reality is a great deal more complex. A white body is the basis for a strikingly different shoulder section, where blue and red intersect, criss-crossing the front of the shirts with hatched pinstripes.

It’s an interesting concept, and one that’s supposed to represent the fusion of the three colours of the Tricolore, red, white and blue, in the most overt and unabashed way ever.

We also wonder if the choice of these colours in particular has a bit of subtle metaphorical significance. The red on the jersey is identical to that of last season’s change shirt, while the blue is a darker hue than what we’ve seen recently, and has more in common with the darker shade worn back in the Nike days (otherwise known as the last time the French were properly good).

Given the way these two colours with very different associations meld together on the shirt, perhaps it’s a very gentle way of indicating that France are fuelled by both the good and bad aspects of their recent history to create a new, successful identity for Les Bleus? That said, they might just really like red and blue…

Moving swiftly, on, we also noticed that the shirt also very similar to another French shirt we’ve looked at in the past – namely the current French sevens jersey. That design had the similar contrasting shoulder colours feature, with a similar diagonal pattern across the chest, and the alternate shirt certainly feels like a companion design to this shirt right down to the colours.

We like that – it creates a uniformity across both forms of the game, which speaks to a shared identity and purpose – and given that French sevens specialist Virimi Vakatawa was sensationally named in Noves’ first starting XV, that unity has to be more important than ever!

We were pretty shocked when we first clapped eyes on this design, but once the initial surprise at how unconventional it is had worn off, we’ve really begun to appreciate it.

Is this your daddy’s French shirt? Goodness no – this is bold, brash and unabashedly modern. It’s also pretty damn cool, and French fans will be hoping to associate it with more positive memories than the previous number…