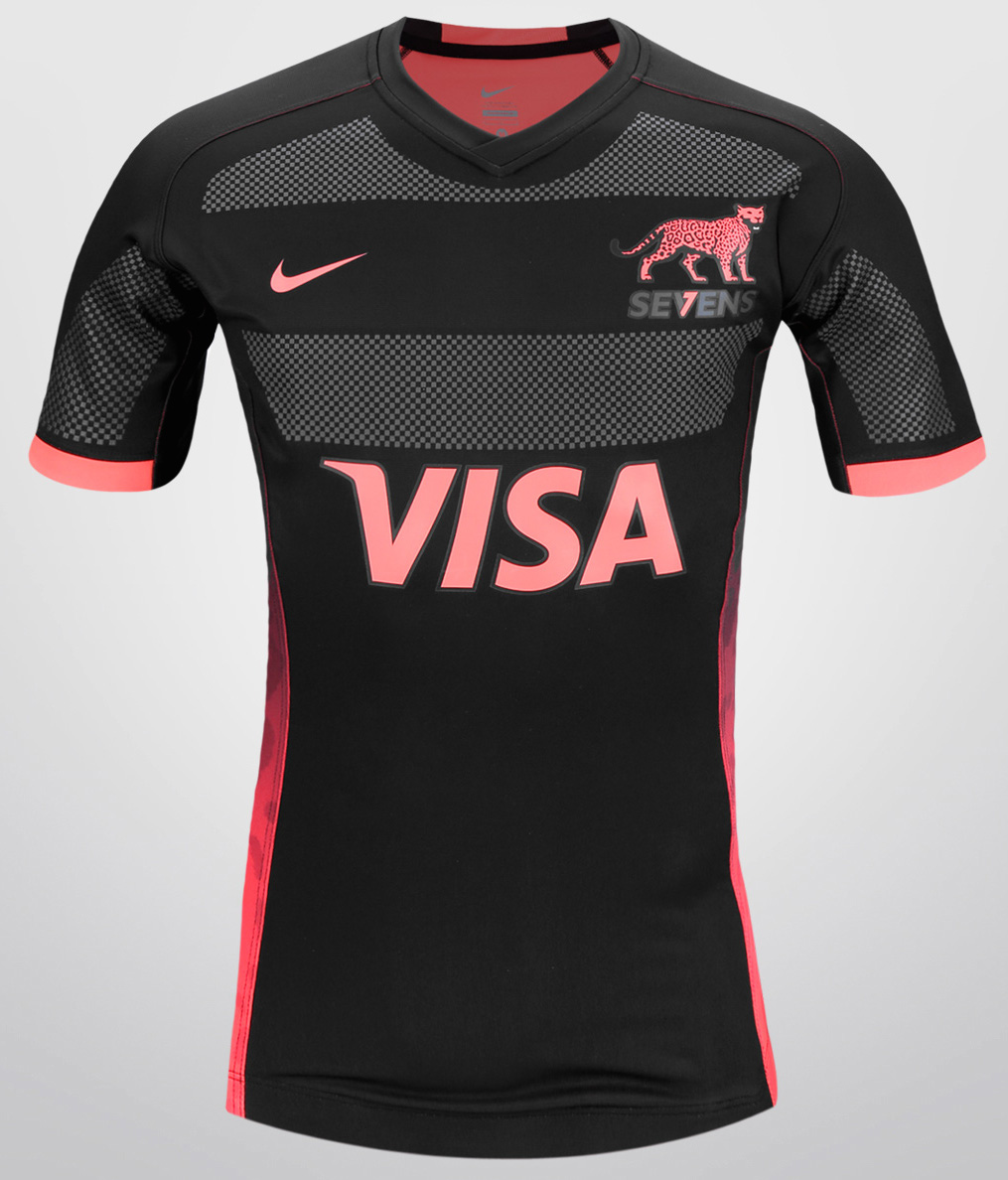 Continuing the momentum built by the 15-a-side team at the Rugby World Cup, Argentina’s Sevens side have started their 2015/16 season in some style, making it to the a semi-final and final in the first two rounds of the HSBC Sevens Series. And they’ve also been wearing an eye-catching new shirt to do it.

Many of the exciting players who tore up the World Cup for the Pumas got their start in the Sevens, and so it’s no surprise that the current generation have qualified for the Olympics in Rio next summer.

And there’s definitely a carnival vibe to this latest shirt from Nike, which continues a trend of wild and wonderful Argentina Sevens shirts from the last few years. Whisper it though – this one might be our favourite of the lot! 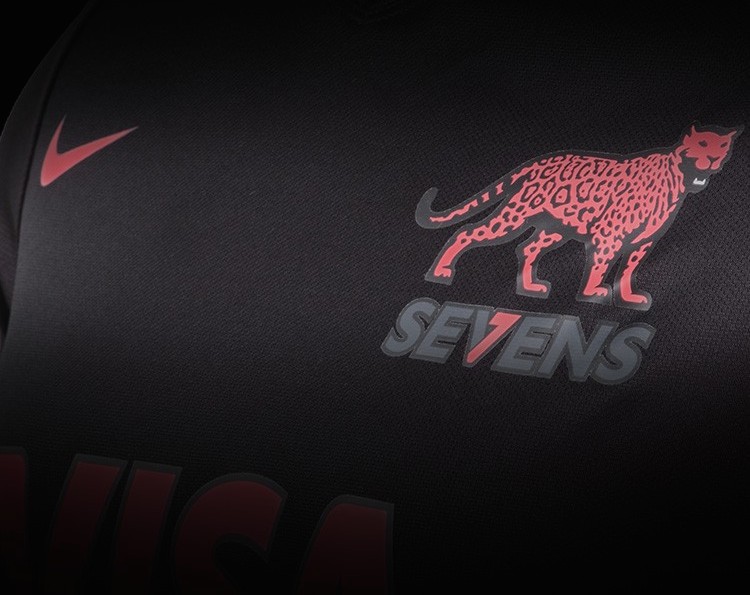 We love the combination of black with an unconventional but bright colour – the previous Wales Sevens shirts is a great example – and here the use of bright, electric pink is really daring, even for the sevens! It continues the trend we saw with the amazingly cool Pumas World Cup change shirt, which paired dark blue with a similarly electric blue – though this is a great deal more bold.

Pink isn’t totally inappropriate for Argentina, however. The colour was used (though with a decidedly more orangey tint) a few years ago, as it’s the colour of the ceibo – Argentina’s national flower. So now you know!

Again like the Argentina RWC2015 shirt, the pro design here has the plain black broken up with mottled grip material across the sleeves and the chest – depending on the light it either looks dark grey or black, but it looks cool in a ‘technical’ sense, and is notable being the only bit of the jersey that isn’t either flat black or pink.

Well, we say that, but you’ll notice a subtle grey-ish outline around the badge, sponsor and the sun motif on the back of the shirt. In the flesh this is made of reflective material, like you’d get on a hi-vis jacket – it sounds gimmicky, but it’s a seriously cool little touch when it catches the light, and very distinctive. 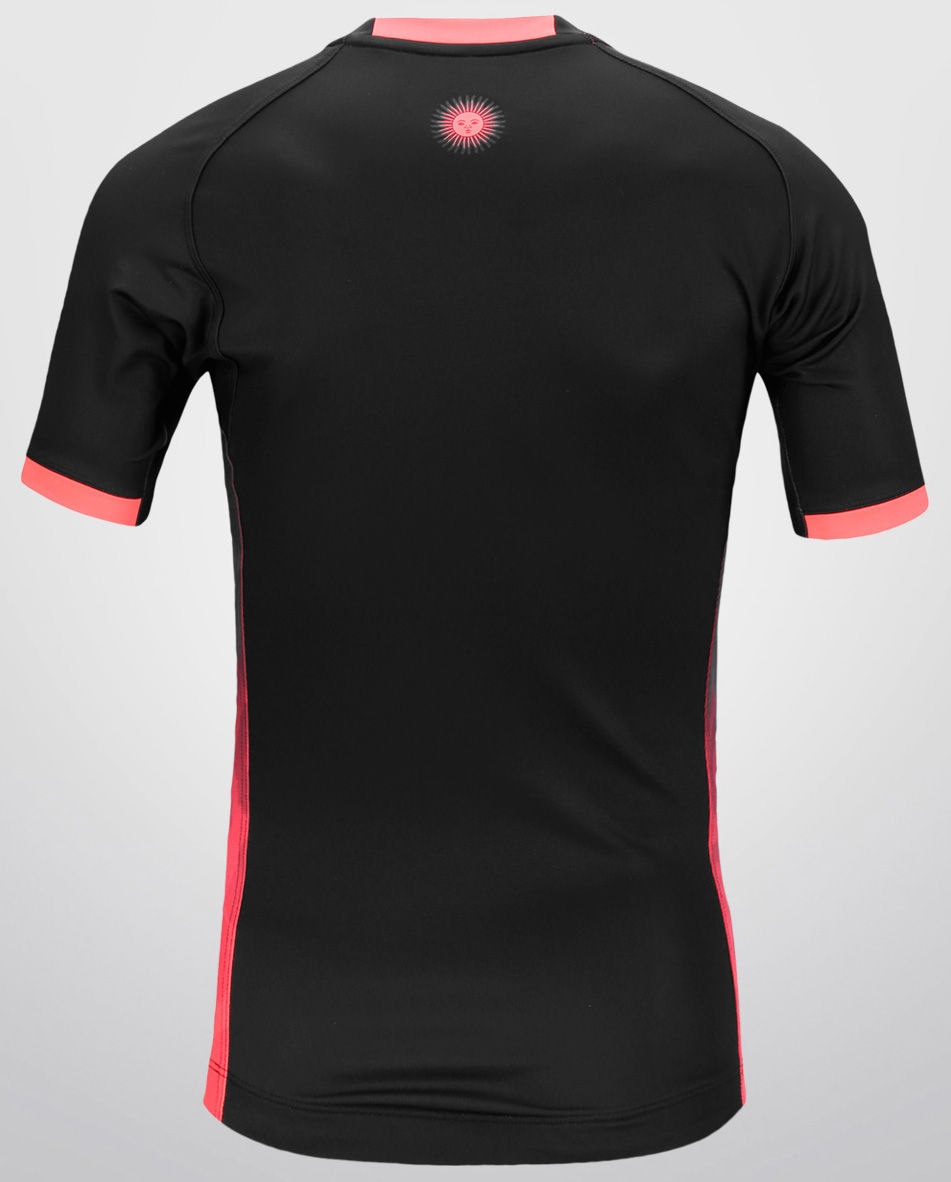 To complete our triumvirate of World Cup shirt references, there’s another much more subtle nod on the sides of the jersey. The pink vents running down the ribs have a subtle puma-spot pattern sublimated into them – the same pattern that adorned the bottom of the awesome, tragically unused World Cup alternate shirt.

Argentina are a growing force in all forms of the game, and in Nike they also have one of the most creative and progressive kit suppliers. We’ve come to expect good things from the partnership, but this has comfortably surpassed those expectations. Quite simply, stunning.