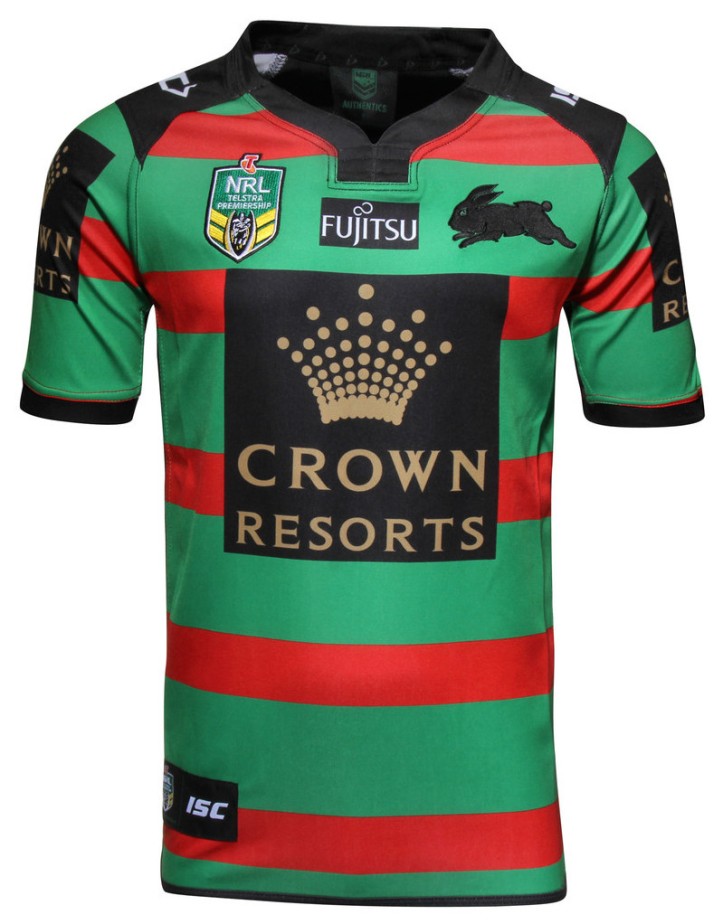 The South Sydney Rabbitohs are a club who have rarely been far away from the headlines since lifelong fan and mobile phone martial arts aficionado Russell Crowe bought the team in 2006, none more so than in the last 18 months, with the twists and turns of Slammin’ Sam Burgess’ code-hopping antics culminating in a sensational return to the club he led to the Premiership in 2014.

If things have been constantly intriguing and unpredictable both on the field and off it for the Bunnies and their fans, the one constant has remained the grand old club’s jerseys, which have retained the distinctive trademark cardinal red and myrtle green hoops in pretty classic style for the last few seasons.

The 2016 vintage, once again produced by league specialists ISC Sport, keeps things pretty similar to the 2015 home design, with larger green stripes contrasting smaller red ones, and a fair dollop of black accents thrown in to taste.

It’s similar to last year then, but not identical. The black side panels, which were large –  perhaps a little overbearingly so – on last season’s design have been scaled back significantly, leaving those classic green and red hoops to stand out more.

There’s still plenty of black, however, as we now have a pair of black shoulder panels that join up with the new ISC collar, which is somewhere between a V-neck and a classic New Zealand-style placket collar, in a way reminiscent of Canterbury’s ‘Loop’ neckline.

It gives the jersey a nice splash of black without taking away from the inherent nature of the Rabbitohs jersey, while still feeling modern and a little bit different.

As with previous seasons, the alternate shirt this time around is a simple palette-swap with the home – the black bits are now white throughout, but the green and red hoops remain. Again, it’s a bit of an interesting decision – yes it looks suitably different from the home design but it’s a little uninspired.

We get that the green and red hoops are part of the identity of the club, but the same could be said for the colours of hundreds of clubs around the world, and it doesn’t stop them doing something a bit interesting with the change strip.

Still, it looks rather nice – again, the slightly slimmed down side panels make it feel a bit more coherent as a jersey, and red, white and green is a really cool combination… even if Christmas was a few weeks back!

We try not to gripe about sponsors too much in our reviews – it’s an unavoidable part of the modern game, and often designers don’t have much say in the size, location or colour of the brands they have to incorporate into the jersey. Here however, there’s no getting away from the fact that the main sponsors on both home and away designs are MASSIVE, and somewhat get in the way of the look of the shirt.

On the away design, the big white box kinda works, as it creates more white and makes it feel more like a change strip than it would if the front was plain hoops. On the home however, the big black box does rather get in the way of those all-important green and red stripes, and it suffers for it.

The Rabbitohs face a very difficult season in 2016 – even with the return of their talisman Sam Burgess, he cannot take South Sydney to the finals by the sheer force of his own stratospheric talent and will. With experienced heads Dylan Walker and Chris McQueen sacrificed to pay for Slammin’ Sam’s return, the Rabbitohs might struggle somewhat this year, but their jersey will never be less than impeccably classic.