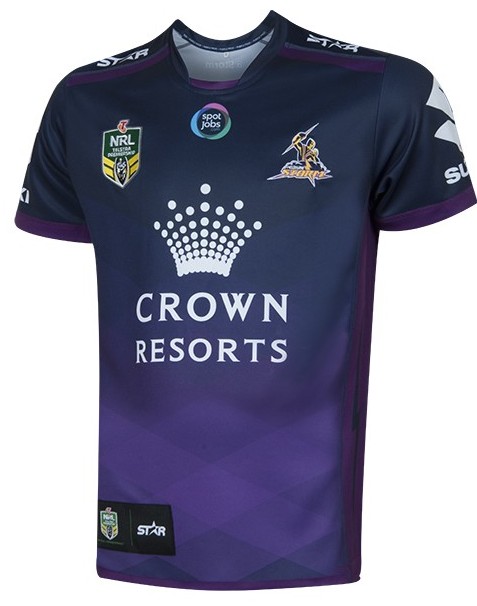 The Melbourne Storm’s 2015 NRL season was one of progress for the Victoria club. They once again made it to the finals, going one better than 2014 and making it to the Preliminary Final, where they lost out to eventual Premiers North Queensland.

For the 2016 season, the Storm will be looking to go one better, and they’ll be doing so wearing jerseys produced by a new supplier in our little corner of the rugby shirt world – Aussie AFL and netball specialist Star Athletic.

Checking out the designs of a new manufacturer is always an exciting prospect, but in this case, Star have some pretty big shoes to fill. Last season’s BLK Storm shirts weren’t just unique and cool, they were downright gorgeous. So how do these new shirts measure up?

Well, it’s a more involved jersey than last year’s design, that’s for sure. The top half is primarily Victoria navy blue with subtle purple accents around the sleeve cuffs and shoulders, bleeding into a striking hatched purple pattern across the bottom of the design, which also gives a subtle chevron effect.

There’s more purple on the sides, which also sees a return of the lightning bolt motif that the club was so synonymous with, and around the back of the jersey we have a substantially more striking lightning pattern, or ‘Storm lightning’ as they’re calling it.

The alternate shirt from last season was stunning… so much so that it made it into the top 25 in our Rugby Shirt Of The Year 2015 feature. With no hoops this year, this new design clearly isn’t quite as striking as the 2015 vintage, but that’s not to say it’s not a looker. 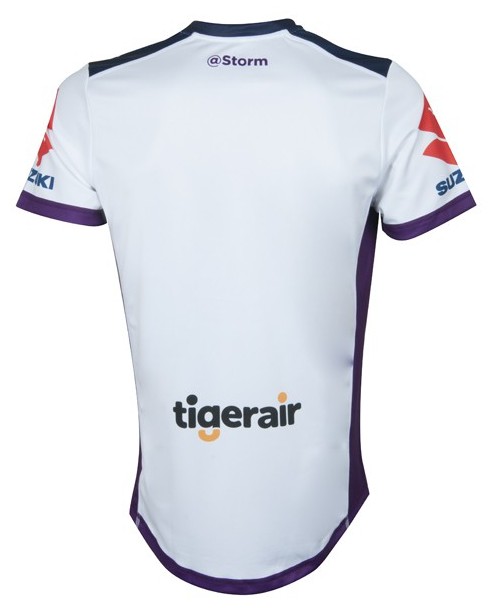 No lightning storms on the back this time around, but we do again get striking dark purple side panels, again sporting the trademark Storm lightning bolts, which work really will with the dark purple sleeve cuffs and jersey hem.

So, have Star Athletic managed to beat last year’s BLK designs with their first crack at the Storm shirts? Well, no, not quite – there’s no getting away from the fact that these new designs aren’t quite as unquestionably stunning and unusual as the 2015 versions.

They’re still really nice though, and the away shirt in particular looks great – hopefully this will be the first of many nice Star Athletic shirts we get to check out.