Northampton Saints have come a long, long way since the dark day of their relegation in 2008. The club has bounced back in a seriously impressive way since, establishing themselves as one of the best teams in Europe, winning the Premiership, the Challenge Cup and making it to a Heineken Cup final in 2010. Despite all this though, for a team with so much talent and depth, the big Euro prize still eludes them – they’ll be looking to change all that this season wearing their brand new European shirt from Burrda.

Those who’ve been paying attention will note that this shirt is basically a colour-swap of the good-but-not-quite-there away shirt we reviewed a few weeks back, complete with the coat of arms of Northampton from the Saints club crest strikingly sublimated into the front of the jersey. 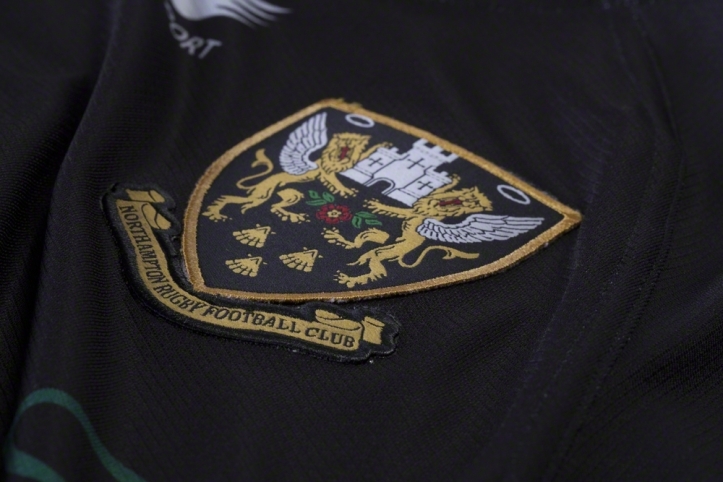 We say that it’s basically the same, but if you look at it closely, you’ll see it’s not identical to the away shirt at all. The castle keep in the middle of the coat of arms, which was present on the other design, has been removed here, and we’re not sure why. It makes the jersey look a bit less cluttered, we suppose, but it also has the slightly disconcerting effect of making it look like the two lions are holding up the Travis Perkins logo, which is a bit much, even in these days of sponsor-integration!

That slightly odd quirk asides, this is a pretty nice shirt – we like that Saints have stuck with black for their European jersey again this year, and it’s also really nice how the club’s other two colours have been incorporated here in a less overt way – the green of the coat of arms and gold on the sleeve cuffs. Subtle, but it really makes this shirt feel more like a Northampton design.

The mystery of the missing castle aside, this is a nicely done tweak on a bold, unabashedly modern design, which uses its colours well enough to make it feel distinct and different – always nice to see. It also means that if Saints have play in the regular away shirt during their Champions Cup campaign, there’ll be a symmetry with the home and away that we actually think is pretty cool. Nice