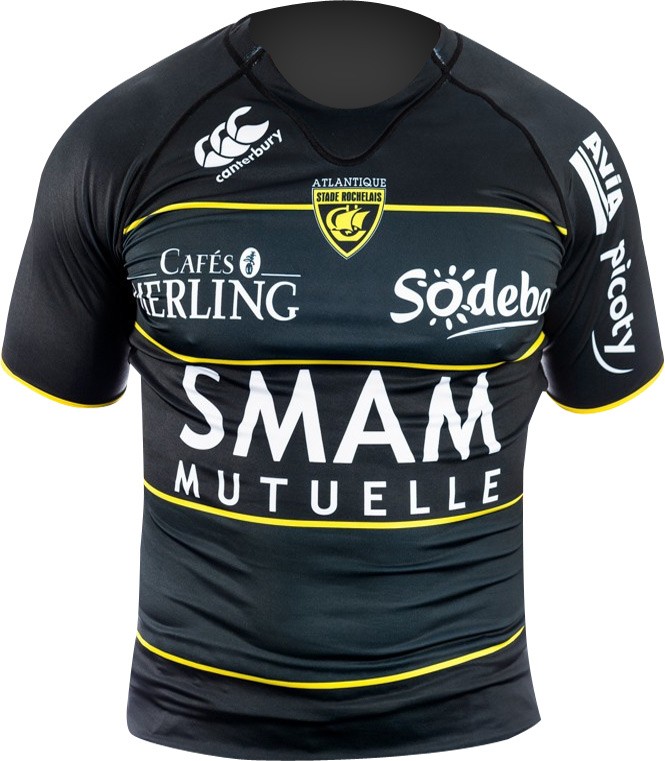 Stade Rochelais returned to the Top 14 via the playoffs last season, and while big-spending Pro D2 winners Lyon came up only to go straight back down again, finishing rooted to the bottom of the table come season’s end, the men from the Bay of Biscay quietly had an excellent season, finishing a hugely impressive ninth in the table, and securing top flight rugby for La Rochelle in 2015/16

Another season in the big time, then, and another season with long-time kit supplier Canterbury. CCC don’t have much of a presence in French rugby, so it makes sense for the UK-based firm to hit the target when they do have a chance to show off their wares in the Top 14. And show off they clearly have.

The Rochelle home shirt is a thing of beauty, twisting the traditional Stade Rochelais home shirt pattern of black and yellow hoops, and giving it an altogether more modern twist, with grey and black hoops being highlighted with eye-catching yellow pinstripes.

It’s a look that’s feels both modern – the subtle hoops thing is one of the most popular and well-used shirt design trends of recent years – and suitably classic, too. The pinstripes are this season’s big trend and we’ve seen Canterbury use them in a very similar way on the new Cardiff Blues shirts this season already, but the contrast of the yellow and black here is perhaps even more effective.

If we were to have be picky, it’s a shame that this shirt suffers from the perennial Top 14 disease that is ugly and over-the-top over-sponsoring. It’s an unavoidable reality of the modern game that jerseys tend to be plastered in sponsors, but the Top 14 clubs really go for either size, quantity or indeed both in attempt to mask every design in a plethora of adverts. At least these are all white on the front, which makes it seem slightly less of a mess.

We’re also not entirely sure about the peculiar 45-degree angle of the Canterbury logo. It’s not something we’ve seen CCC do before – even when they’ve put it in slightly unconventional places (shoulders anyone?) it’s always been straight, at least. This just looks odd.

If the home shirt kept things subtle with the hoops, the away shirt most certainly does not, and it’s all the better for it. Gone is any notion of subtlety in these hoops – Canterbury has made sure we can’t miss the contrast here, with white and yellow combining to hugely striking effect.

Normally, we’d consider yellow and white to be two colours that might look a bit meh together, but here the use of black for the pinstripes (expanded so that the stripes also encircle the Canterbury Loop collar and across the raglan sleeve areas) really breaks up the two colours nicely, giving it a much more bold, striking look than you’d have without.

Stade Rochelais might not be the most famous club in the Top 14, but they definitely seem to be a club on the up. What’s more, they’re also one of the few top-flight teams outside of the British Isles and Australia who are supplied by Canterbury.

We wish that wasn’t he case, as Canterbury are one of the best, if not the best kit supplier in the rugby world – they so rarely do bad designs, and turn out interesting, individual designs for any club they do, even ones that aren’t too high profile.

That fact is plainly evident here, as CCC has created two striking, classy shirts for Stade Rochelais that are both different from one another, and instantly recognisable in the wider rugby world. Nice.