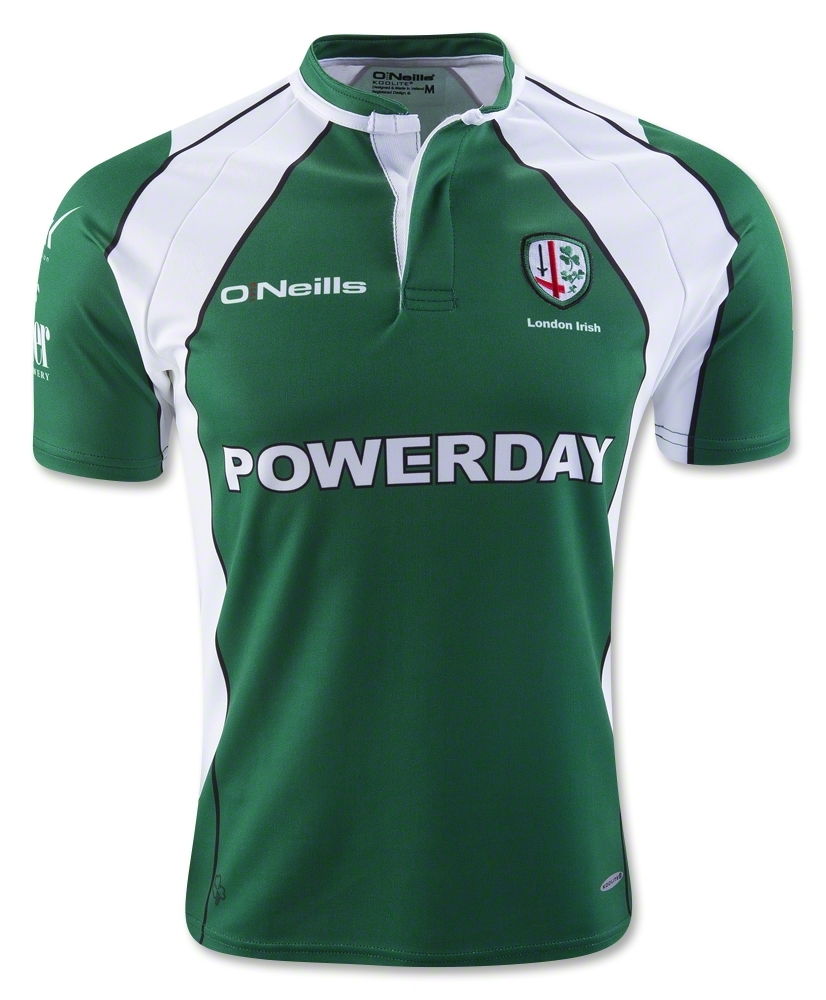 When London Irish signed up with Irish supplier O’Neills last season it seemed like an absolute no-brainer. The brand might specialise in producing GAA jerseys, but they’ve got plenty of rugby experience, having been the Quins kit supplier until 2014/15, and you’ll see plenty of O’Neills shirts at down in the lower leagues in both codes of the game. An Irish brand with experience in the sport producing kits for an Irish Exiles team – perfect, no?

Well, it seemed like a great idea… and then we saw the triple-headed hydra of meh that was last year’s Irish home, away and third kits. There was nothing wrong with them, per se, but sweet baby Jebus they were BORING. Perhaps the most relentlessly, snooze-inducingly plain shirts we’ve ever had to try to review.

In fact, so completely underwhelmed were we by the three identical totally, utterly plain coloured shirts, we pretty much gave up, and we gave up on expecting anything exciting from O’Neills, too. But then St Patrick’s Day happened, and with it, came the Irish St Paddy’s Day shirt to put O’Neills right back in our good books – not only was it interesting, it was also one of the nicest designs of the season. They were back in the game. 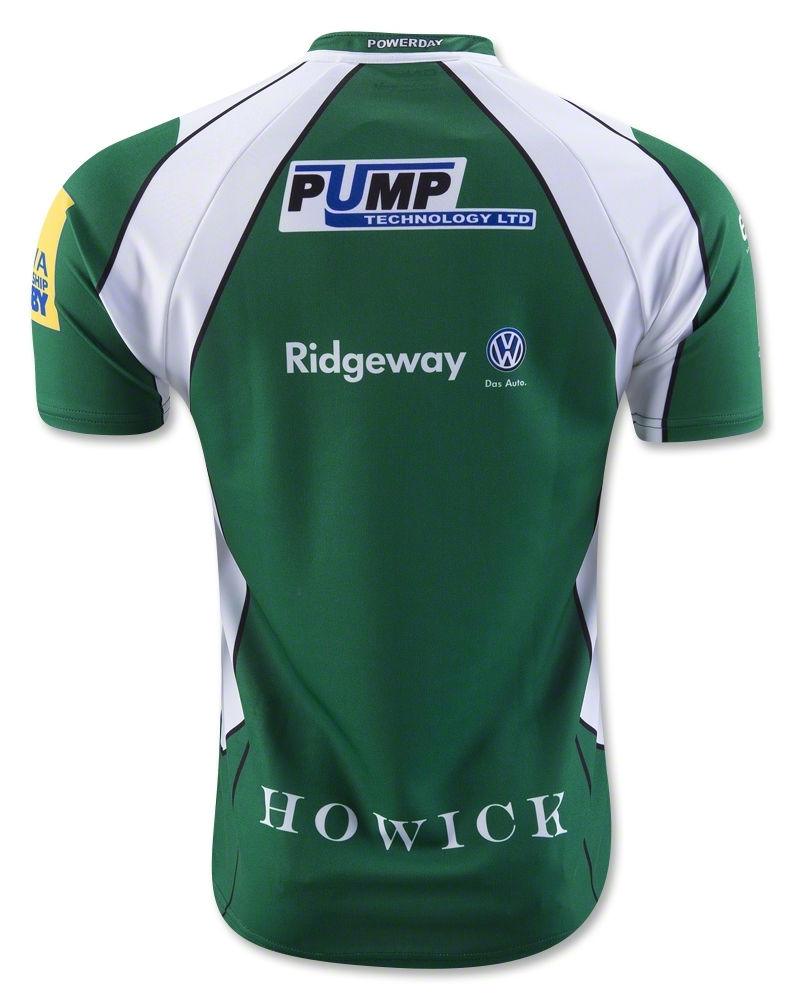 There’s something a little early 2000s about the white panelling around the shoulders, and we’re not entirely sure if it works or not. We’d have preferred the white panel to be a tad thinner, and perhaps lose the extra panel up top near the collar, as the white is slightly overpowering the all-important green-ness of the jersey. It’s actually very, very similar to the 2008/9 RugbyTech shirt they wore, albeit with the right shade of green restored.

That said, we think it still works – the addition of the old-school stub collar gives the shirt a bit of a late-90s feel, in a good way. Who doesn’t look back on those pre-2003 non-skintight shirts with a bit of a smile, eh? 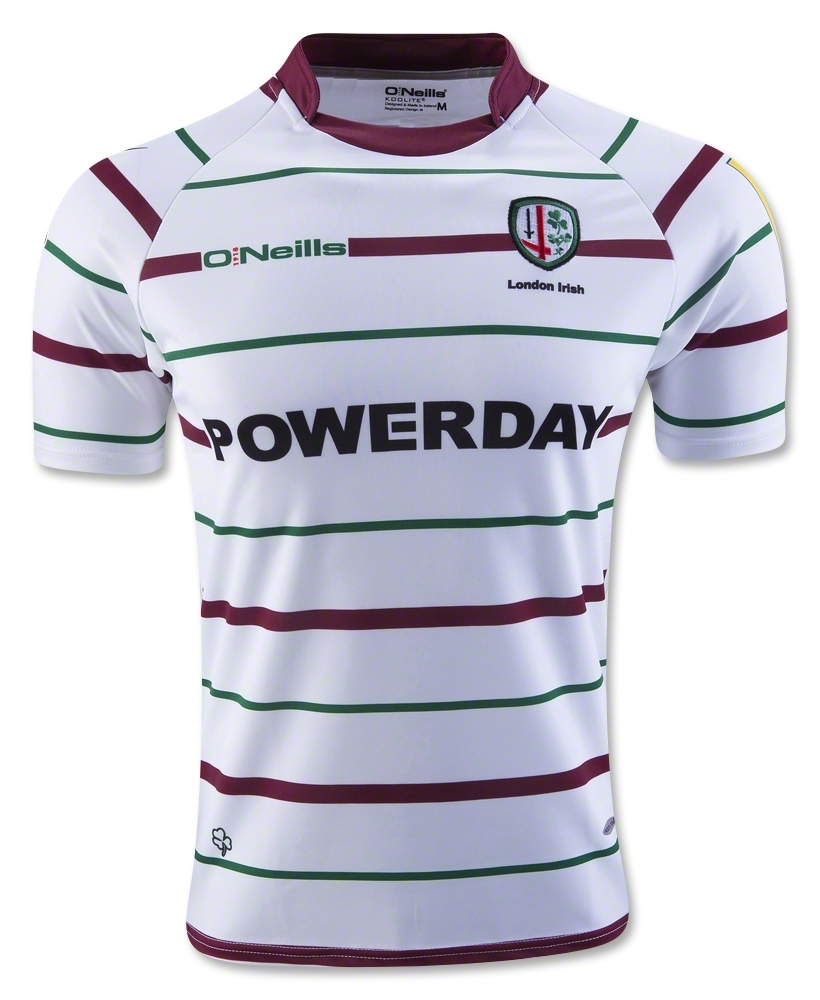 If the home shirt is a qualified success, then the away shirt needs no such justification. Put simply, this is one of our favourite shirts of the season, in any league. When we got excited about O’Neills again after the St Paddy’s Day shirt, we knew that the designers over the Irish sea had something like this in them, and boy have they delivered.

Being massive rugby shirt nerds as we are, and running this website where we review pretty much every new top flight rugby shirt across the globe, you start to notice weird trends that criss-cross brands, clubs, leagues and continents – from the subtle hoop to the asymmetrical front and back, we’ve seen it all. This year, it’s pinstripes. Loads, and loads, and bloody LOADS of pinstripes. 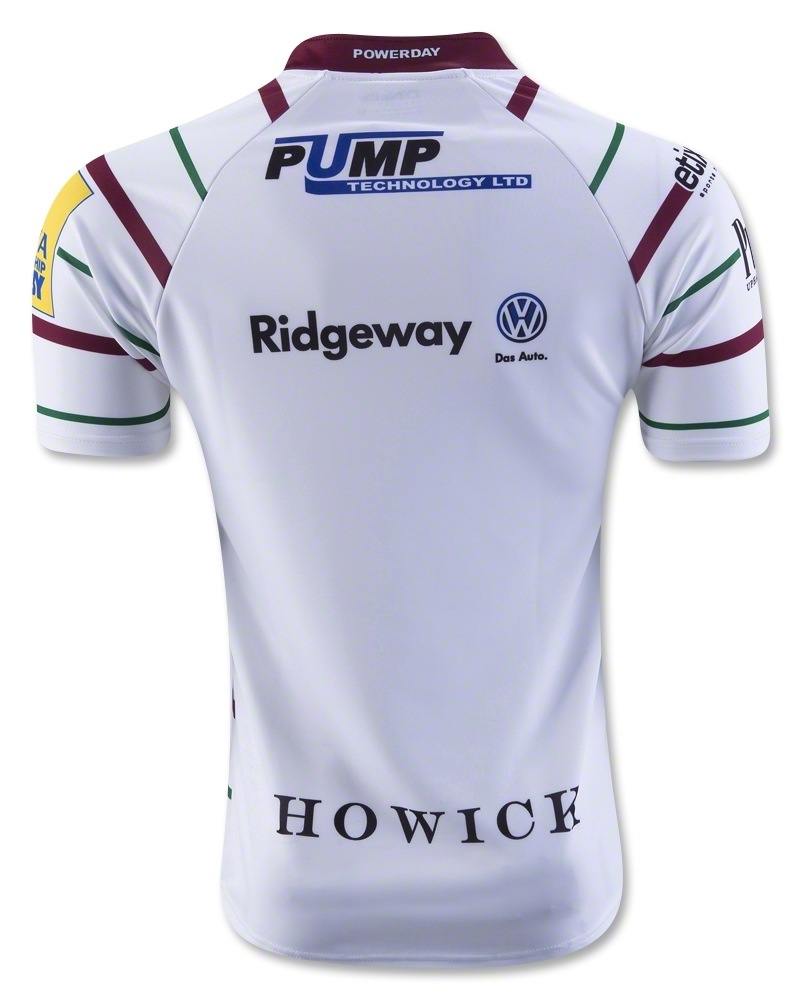 And that is a no bad thing, at all, because clearly, pinstripes look frigging awesome – just look at that goddamn shirt! The red is a little darker and dare we say it a touch plum-coloured compared to the red of the cross in the London Irish badge, but it looks great alongside the green, and the whole thing hangs together really nicely.

If we were to be a little picky, we think it’s a slight shame that the pinstripes don’t continue around the back, but with the unavoidable sponsor-creep on the back and the numbers too, the stripes might have made it feel a little cluttered.

Last year’s Irish shirts were boring yet inoffensive, and this year O’Neills has clearly taken steps to rectify the former, and vastly improve on the latter. The home shirt has more interest about it, and even though it feels a tad dated in some respects, it’s quite charming for those of us who look back on the turn of the century rugby shirts with any fondness.

The away kit is just straight up gorgeous, however. We’ve seen plenty of pinstriped shirts in the last few months, but this is most certainly one of our favourites, and one of the nicest shirts we’ve seen this season, full stop. We can’t wait to see what St Patrick’s Day brings…