With the Rugby World Cup just one month away, pretty much all of the shirts that we’ll see on display have been released and reviewed by us here at Rugby Shirt Watch. There are a few stragglers, however, and one such team is Tonga. The Pacific Islanders have been ever-present at World Cups, 1991 aside, and have signed up with a new supplier, Kukri, this time around, so let’s get stuck in…

Kooga supplied Tonga’s gear for the last few Rugby World Cups, and while the 2011 tournament went very well for the Tongans, as they beat eventual finalists France in the group stages, you’d have to say that the shirt was a little, well… dull, to be honest. One thing we’ve loved about BLK’s RWC gear this time around (BLK used to be Kooga Australia, for those who don’t know) is their incorporation of imagery that has unique significance to the nation in question. 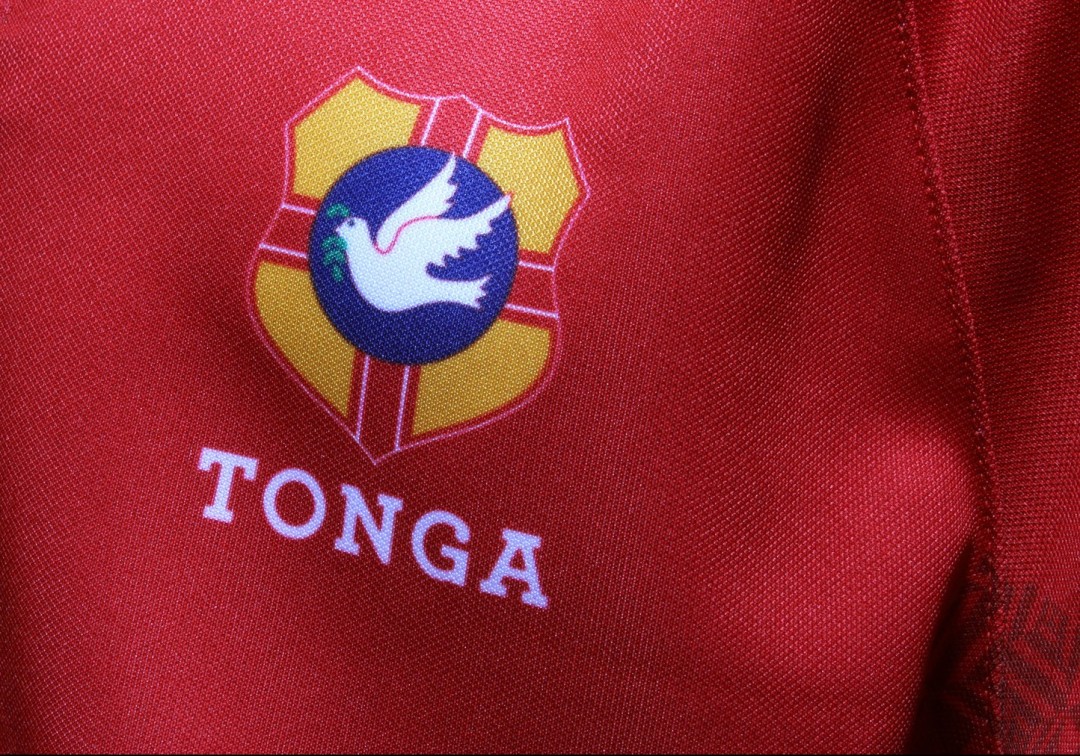 It’s hard not to feel that the 2011 shirt fell somewhat short of that, especially compared to the shirts we’ve seen at previous World Cups, where traditional tribal patterns set their shirts apart from other nations in the tournament. With that in mind, it’s nice to see that Kukri has brought some of that back here, but in a way that fits right in with the British firm’s restrained, minimalist design philosophy.

Instead of plastering the tribal pattern all over the place, Kukri has opted to keep things subtle. The most noticeable element is a single band of white and red that runs over the right shoulder, while there’s a much less noticeable red-on-red version that runs under the arms and down the sides of the jersey. It’s a nice touch – the asymmetrical thing is something we haven’t seen much of this World Cup, and it certainly sets the Tongan shirt apart from others out there. 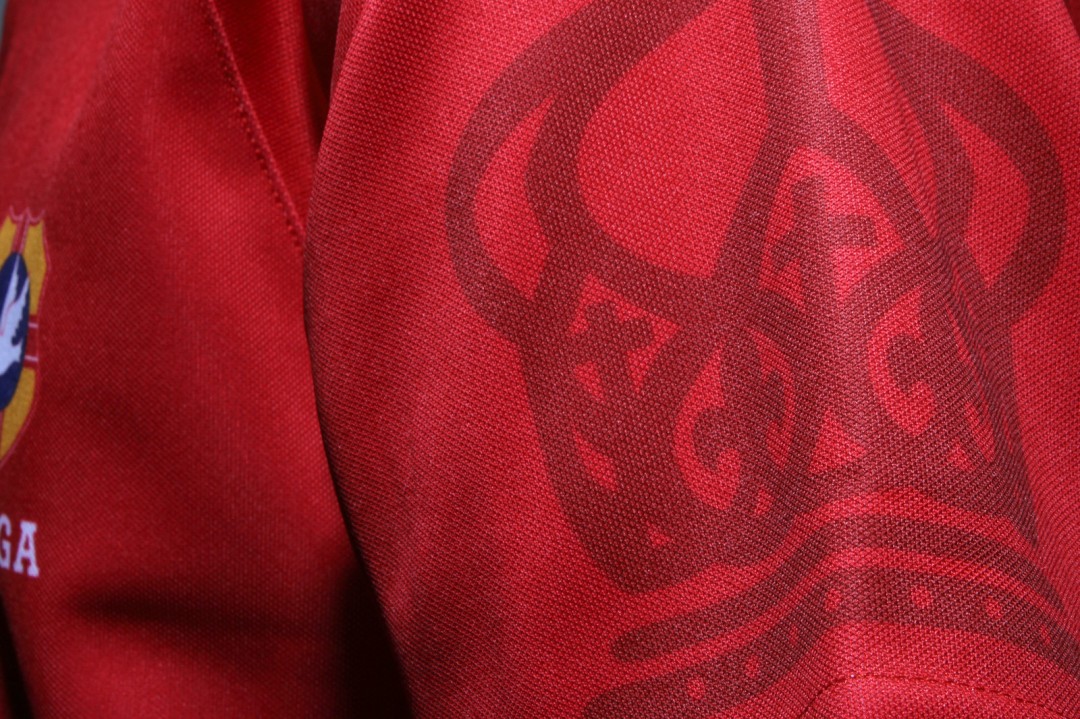 The tribal motif isn’t the only bit of unique detailing here, however, and on the left shoulder, there’s another bit of red-on-red artwork that, to our knowledge, hasn’t featured on a Tonga shirt before. It certainly appears to be the outline of the Royal Crown of Tonga – a rather blingy bit of headwear that has been worn by the kings of Tonga since it was first minted back in 1873, right up to current King Tupou VI. It’s another nice, individual touch, and given that the use of tribal art and patterns has been quite popular at this World Cup, it further adds a bit of uniqueness to the shirt.

The crown, by the by, is reportedly the largest and heaviest in the world, and in a country where the monarchy is generally loved and respected, it’s an important symbol of Tongan sovereignty – it was originally created at a time when France and Germany had ambitions to annex Tonga, and the crown, along with the flag and national anthem, were created in part as a way to maintain Tonga’s independence. 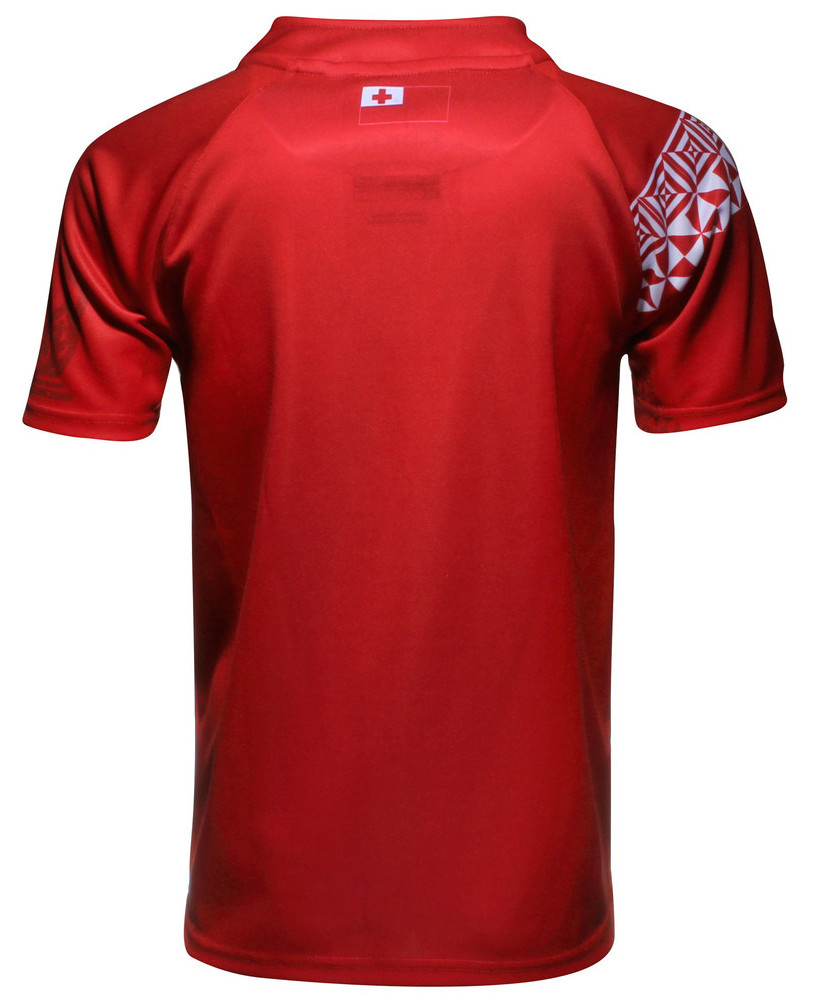 Speaking of the flag, continuing a popular trend at this World Cup, the national standard of Tonga is the only real ornamentation on the back of the shirt, subtly outlined so it doesn’t totally blend in with the rest of the red shirt, but still pretty darn easy to miss.

Tonga are Kukri’s only representative at this World Cup, and so obviously the pressure was on the brand to get it right. As we’ve seen recently with Kukri’s Ulster shirts, they have a knack for keeping things simple, but the danger there is that sometimes it can look a little too plain.

Thankfully, this hits a nice balance – the tribal art on the shoulder, the crown outline, and the red-on-red pattern down the sides makes this a clean, classy shirt, but one that has plenty of nice little touches to entertain the keen-eyed. Nice.