The Rugby World Cup is a fabulous occasion for a whole wealth of reasons. It’s the most concentrated dose of test rugby you’ll ever get, it’s a grand stage for new heroes to be made and old ones to truly leave their mark on the game. And then there’s the big one – the shirts. While we get occasional splurges of new shirts around the start of the various countries’ test match seasons, the World Cup dumps shirts from every major rugby playing nation on earth in our laps at pretty much the same time – it’s a feast of new gear.

What’s more, the Rugby World Cup rules state that every team in the tournament must have both a primary and alternate strip to get around any colour clashes that may arise through the tournament, meaning that certain teams that don’t usually bother with such things have to get the collective design juices flowing to produce a change shirt. 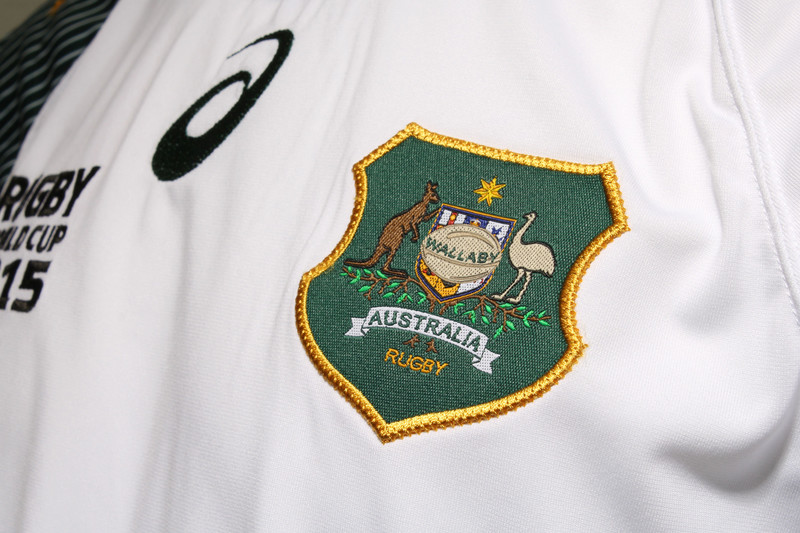 Australia are one such nation – playing in gold as they do, there’s usually no call for them to need an alternate shirt. Precious few other countries in world rugby use any shade of yellow as a primary colour, and in your average season won’t face any team they could potentially clash with. World Cup rules is rules, however, and so here we have Australia’s offering.

Now, it’s an understatement to say that the primary Wallabies World Cup shirt from ASICS has been causing quite a stir with purists, who are aghast at the eye-catching take on the green and gold, and while we can understand their objections to something so defiantly modern, it’s worth remembering that not everyone likes the clean, classic retro look.

The alternate shirt is a simple palette-swap of gold for white, with the controversial green bits, including that shoulder motif, remaining unchanged from the home design. With that in mind, you’d think people would be equally aghast, but generally the prevailing opinion has been that it’s rather nice.

Indeed, there is something less challenging about green accenting white in this way – it feels more like a nice splash of colour on what would otherwise be a very plain and stark shirt. It’s worth noting that white and green works FAR better than the rather unfortunate gold and white shirt that KooGa produced for the last World Cup, too.

One of our commenters suggested that Australia’s alternate shirt should be green, not white, as emerald green was the original primary colour of the Wallabies in the 1930s. We like this idea, and it makes sense to have a dark shirt to contrast a light-coloured one, but there are a few problems with that, not least that any green shirt made would simply look a bit too much like either a Kangaroos jersey, or even a Springboks one.

Australia generally don’t need an alternate jersey, but the World Cup states they’ve got to have one – and in this case, there is a very, very slight chance they might need it in case of a colour clash… after all, it’s not totally impossible that Romania go on an unlikely run through to the knock-out stages of the tournament. Ahem.

Regardless though, this is a very nice shirt – the green and white work very well together, and there’s little doubt that despite the similarity of its modern design, it’s a good deal less polarising than the home design.