The Rugby World Cup is just a few short months away, and if you’re reading this site, then chances are you’re as bloody excited as we are. We might all be counting down the days, until England and Fiji run out at Twickenham, but there’s plenty to get excited about in the mean time – that’s right, shirts! And congratulations to South Africa who take the gong for first RWC2015 shirt reveal. Let’s get stuck in…

ASICS have been the Springboks kit supplier since last season, and we were very impressed with the Japanese firm’s clean, uncluttered take on the South Africa jersey. Their second attempt is obviously a hugely important one – there’s a good chance someone wearing that jersey will be lifting the Webb Ellis Trophy come the end of the tournament, so they don’t want to churn out an eyesore. People remember rubbish Rugby World Cup shirts – just ask Canada in 1995!

Sensibly then, the folks at ASICS have gone for a very clean, simple evolution of last year’s design. Many of the elements of the design have been simplified, which is always a good thing for a World Cup shirt – the presence of the mandatory RWC logo on the right breast means that it’s very easy for a design to get cluttered.

Thus the collar has been completely removed – last season we had a classic ‘kiwi’-style semi-open collar that was yellow with green placket – here we’ve got a simple round-neck affair with a small yellow stub collar at the back. It definitely cleans up the front of the shirt, leaving it free for the Protea badge, ASICS logo and the RWC patch to sit in an uncluttered fashion.

Talking of badges, on the players’ version we noticed that, rather than having the badges stitched on in the traditional style, these ones appear to be made of some sort of embossed rubbery material, and have been heat-bonded to the shirt. That might not be as hard-wearing as a stitched logo, and we wouldn’t be surprised if it falls off after one wash too many, but there’s little doubt the 3D effect on the badge looks really cool. You’ll notice that the non-Pro supporters version still has the normal stitched version, so choose your poison. 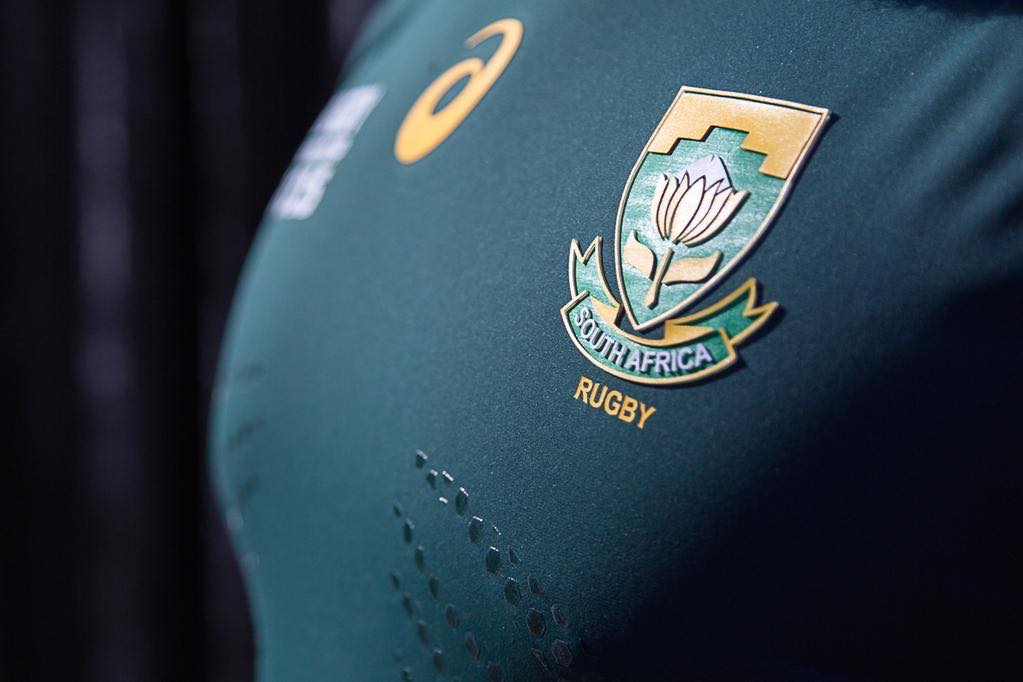 The big change from last season is of course the sleeves. While the gold has been toned down on the collar, we’ve got an explosion of the colour here, with a large band circling the end of the sleeve, broken up with a thin green pinstripe around three quarters of the way up. Above the stripes on the left sleeve you’ll notice the Springbok badge – moved from the centre of the jersey to accommodate the RWC badge as in 2011 – and on the right there’s the Rugby World Cup winners patch.

So what’s the story with the yellow hoops? Well, someone suggested it might be a nod to the 1999 World Cup shirt, which had thin yellow stripes around the top of the sleeves – 1999 was the last time the RWC was held in the British Isles after all, but the stripes are so much bigger here, it’s a bit of a tenuous ling… 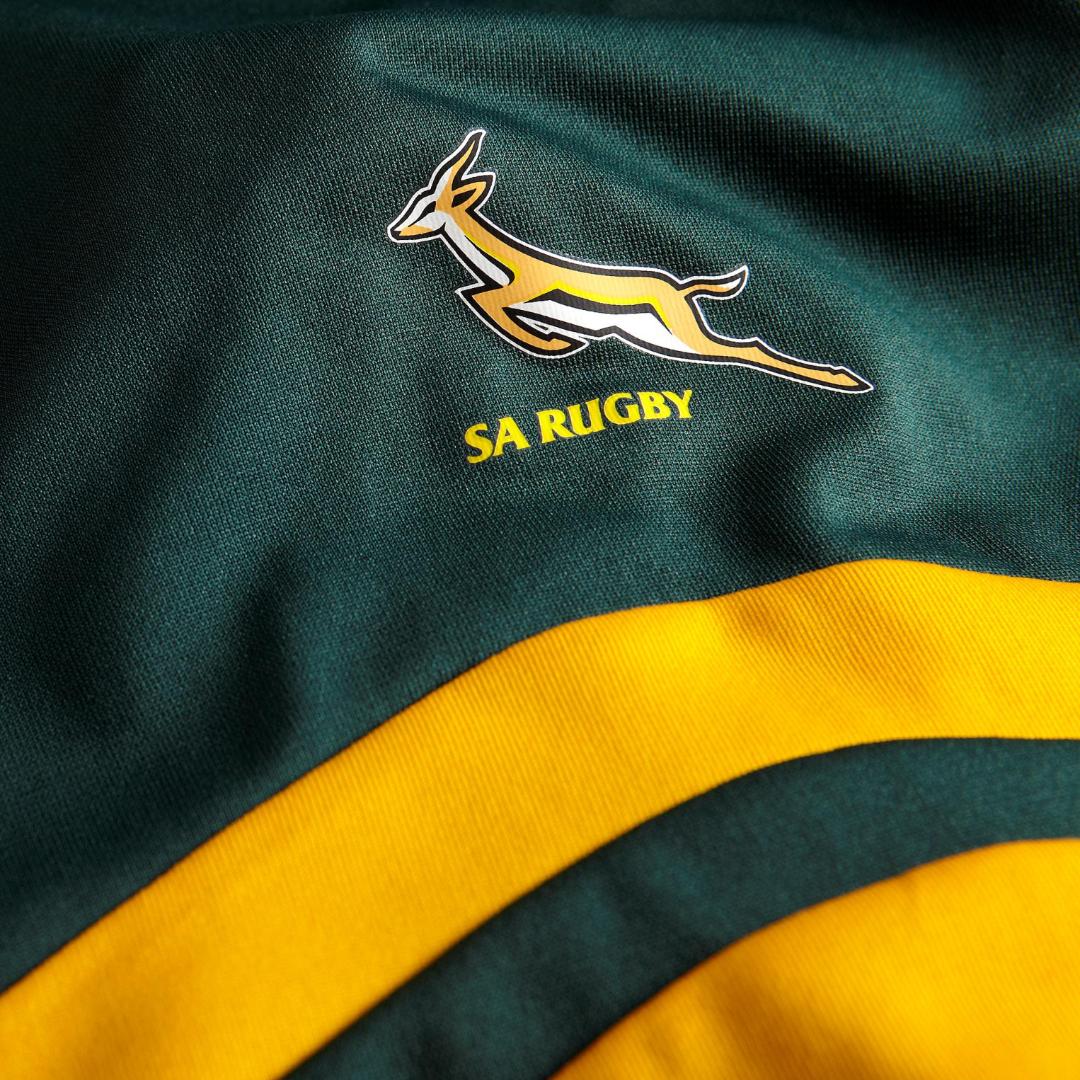 That said, we think they might be right, there is a very subtle little hint to the ’99 shirt here, but it’s not about the sleeves on that shirt – check out the collar on the old shirt here: thin green stripe against a big block of yellow… coincidence?

The more we look at the shirt, however, the more something bugged us. It definitely reminds us of something… we just couldn’t think what it was…

And then we had it. 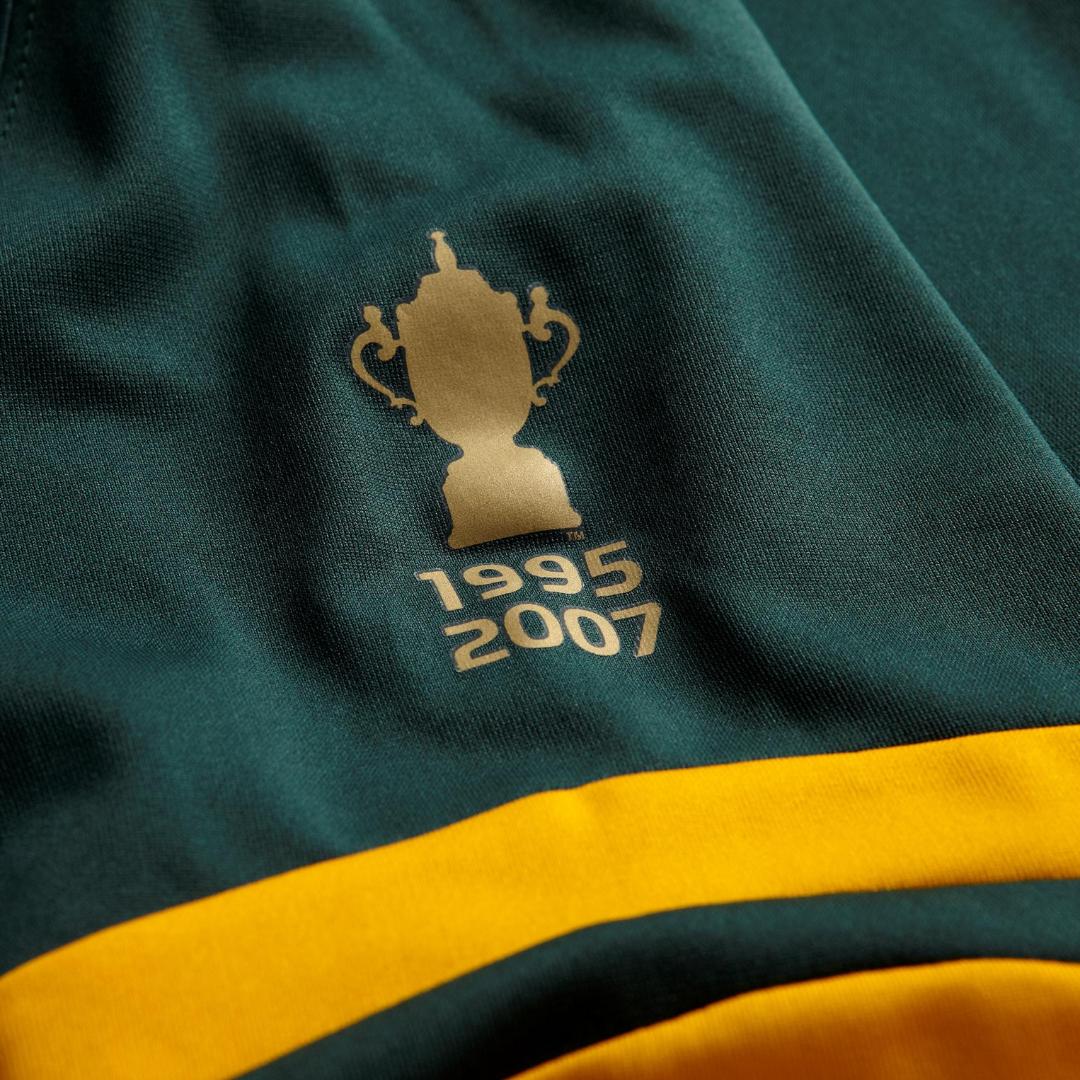 Clearly someone in the ASICS design department is a fucking Cheesehead, because the Springbok World Cup shirt is totally paying homage to the Green Bay Packers jersey! The Green Bay uniform is a timeless sports design classic, though, so who can argue with them drawing some inspiration from the best.

The last few years of Springbok jerseys have been very nice, but there’s not been too many daring design choices made by either ASICS or previous supplier Canterbury – generally that’s fine by us, as clean, classic designs for the biggest teams is generally a recipe for a winner. 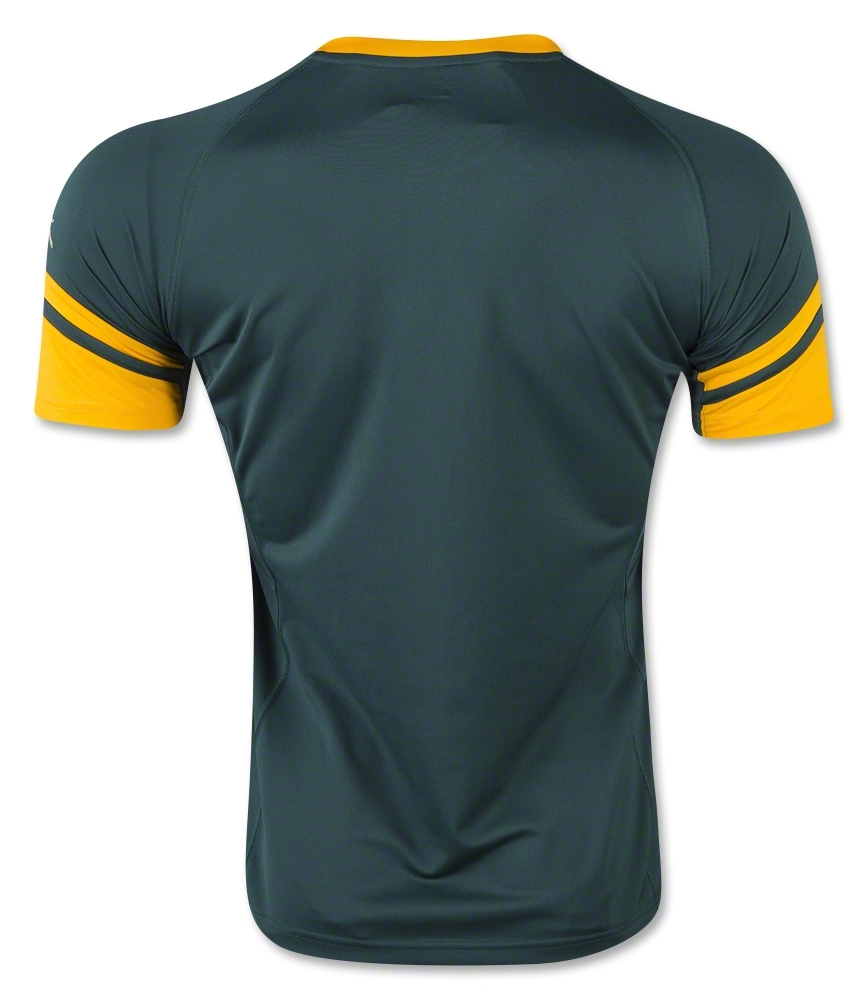 But we’re really glad that ASICS has chosen to be a bit daring with this Springbok World Cup shirt – the yellow sleeves have raised a fair few eyebrows on social media, and reaction hasn’t been totally positive – because we think they’ve hit on a winner. Too often a Rugby World Cup shirts end up being so plain there’s almost nothing to say about them, but these manage to be interesting, clean and classic-looking all at the same time. No mean feat.