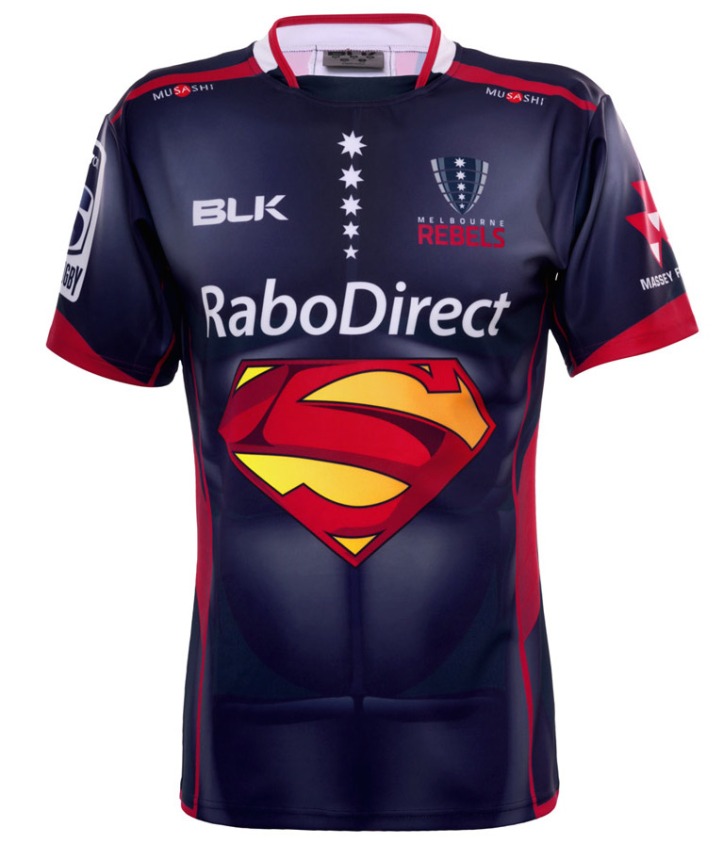 If there’s one thing we love about the NRL, it’s that those guys are bloody addicted to one-off jerseys. It seems nary a month goes by in Australia’s most watched sports league without some special round that necessitates an equally special shirt. In the last few years Super Rugby has climbed on this bandwagon, too, with various clubs producing special shirts for various themed or charity-related games. The Melbourne Rebels are having their own theme shirt this weekend, and the theme is rather, er, super…

The Rebels are no strangers to the one-off jersey – after all, who can forget last season’s Indigenous shirt? This is a little different, however. As part of the Super Rugby ‘Super Hero Round’, they’ll be taking the field in a shirt modelled closely on the look of Krypton’s favourite son, Superman.

If all this feels a bit familiar, then don’t worry, nobody’s been turning back time by flying around the world backwards, the super hero shirt concept isn’t a new one – in fact our old friends the NRL have done this all before. Last season’s Marvel Heroes round showcased some of the coolest, most memorable jerseys we’ve seen, and indeed, the Superman concept was wheeled out in both hemispheres: by the Rabbitohs down south and Leeds and Wigan up North.

So why should we care about yet another Superman jersey, if it’s all been done before? Two words – colour scheme. While the Rabbitohs, Warriors and Rhinos might have had good fists at a Superman jersey, they don’t have the benefit of having a shirt that’s already blue and red, the classic Supes colours. It instantly makes the shirt look just a bit more right, even if the ‘S’ is a bit low on the shirt (and a bit weirdly designed) – it should be on the chest, not the belly!

With such a spot on colour scheme, we’re a little disappointed that BLK didn’t opt to follow this year’s big jersey trend and have the back of the shirt be a different colour to the front. Why, you ask? Well, because then they could have made it red, stuck a fucking yellow ‘S’ on the back and it’d look like the bloody CAPE! Instead, we’ve got a subtle, pretty tasteful black ‘S’, which is fine, but totally not as rad as our idea.

Speaking of missed opportunities, really disappointed to see that the Rebels are just wearing their normal blue shorts instead of ones that look like they’re wearing their pants on the outside. C’mon guys! While we’re here, we need to talk about fake abs on a rugby shirt – yes, that’s fine for the fans, but if you’re a pro rugby player in this day and age, you shouldn’t need to have your abs drawn on for you. If Matt Dunning can get ripped, then frankly current pros have no excuses…

This is a pretty cool shirt, the Rebels alternate colour scheme is perfect for a Superman look, and it’s great to see the comic book jersey trend cross codes – we’d love to see more of it. That said, we’d love for them to have gone a bit further and take a leaf out of the truly amazing NRL Marvel shirts from last season. Here’s hoping the next time will be even better.