The English County Championship is one of the oldest surviving tournaments in rugby union, having first been formally recognised by the RFU all the way back in 1899. While county rugby has long played second fiddle to the club game, particularly since the dawn of professionalism, it’s still a tournament with heritage, prestige and a passionate following.

Cornwall haven’t been historically very successful in the County Championship – prior to this year they’d won it just three times in over a century, and not since 1999. They’ve been close, however, being runners up the last two seasons, and making the final again this year, where they finally broke their Twickenham hoodoo, lifting the Bill Beaumont Cup at the third time of asking.

On-field success is all well any good, but it matters not a jot if they haven’t got a decent shirt – we all know this. Thankfully, the Cornish RFU has a very cool design from BLK that hits all the right notes.

Cornwall’s traditional black with thin gold hoops shirt design has been messed with a fair bit in the last few years, with varying degrees of success. This BLK design however, zeroes in on the classic Cornwall look and really doesn’t deviate from what is a very clean and timeless look. 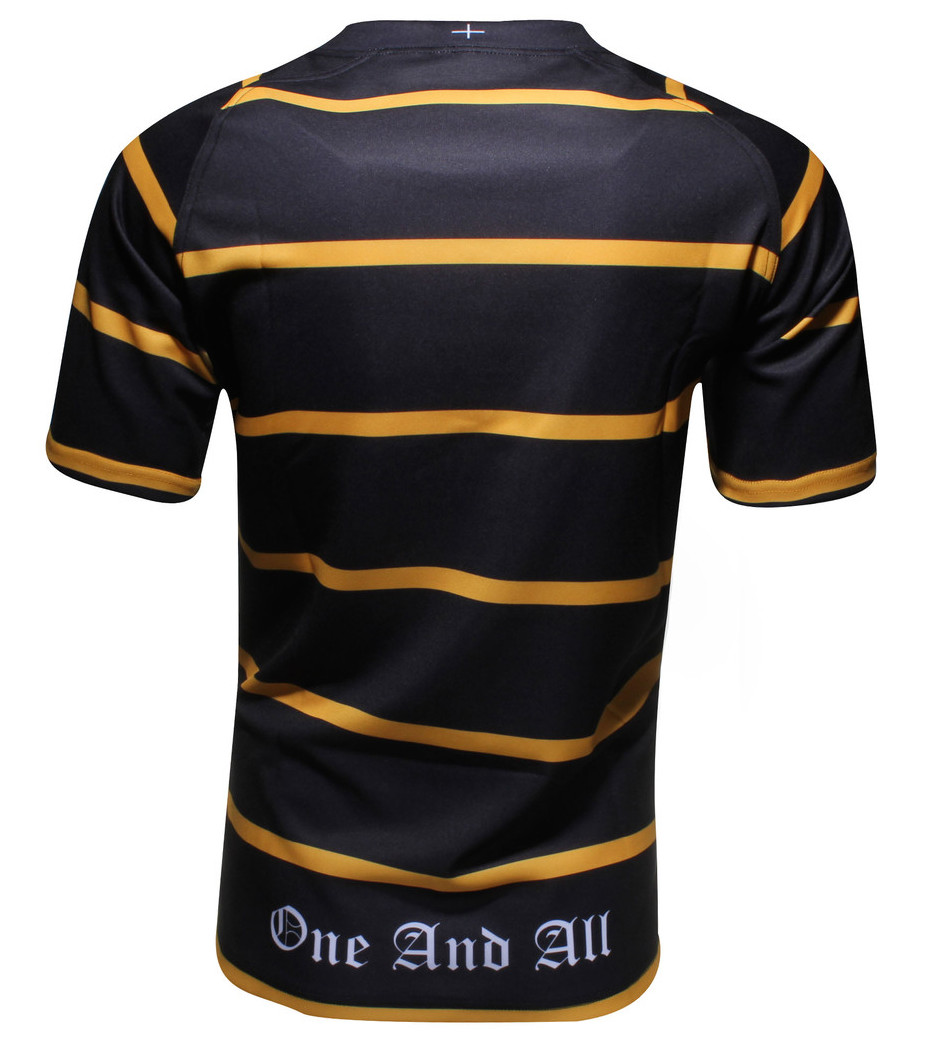 While it couldn’t be simpler around the front, there are a couple of extra touches round the back, one of which we dig the other… eh. Firstly, it’s nice to see Saint Piran’s Flag on the back of the collar – some people hate national flags on shirts, but we really don’t have that issue, and think it looks very tasteful here.

Less tasteful, however, is the presence of Cornish motto, ‘One And All’ emblazoned on the bottom of the jersey. We’ve got two issues here – size and font. It’s way too fucking big, and the font is somewhere between old country pub and ill-advised prison tattoo, with the slogan’s unfortunate placing at the back of the jersey giving it a bit of a tramp stamp vibe too. Not good. We’ve got no complaints about the slogan being included in the jersey, but maybe in a less overt way? Inside the collar, on the sleeve? And would it have not felt a bit more special if they’d used “Onen hag oll”, the Cornish translation of the motto, instead?

But it’s an unfortunate blight on what’s otherwise a beautiful, classic-looking jersey. A shirt fit for champions indeed.