As far as pre-season preparations go, the Titans have had it pretty rough. After five players, including big guns Greg Bird and Dave Taylor, became embroiled in a drug scandal, the club revealed it had been taken over by the NRL itself following months of struggling to pay staff and players. And to top things off, at the time of writing, the team have yet to find a main sponsor for their jerseys that have barely changed since last season, and if you recall, we weren’t too keen….

Still, the only way is up, and with their future secured let’s try and help send some positivity the Titans’ way by bigging up their shirts. There’s little escaping the main things we disliked about last year’s shirt: the blunted gold chevron; the uneven colour scheme; and the team badge that is more hoplite than titan. 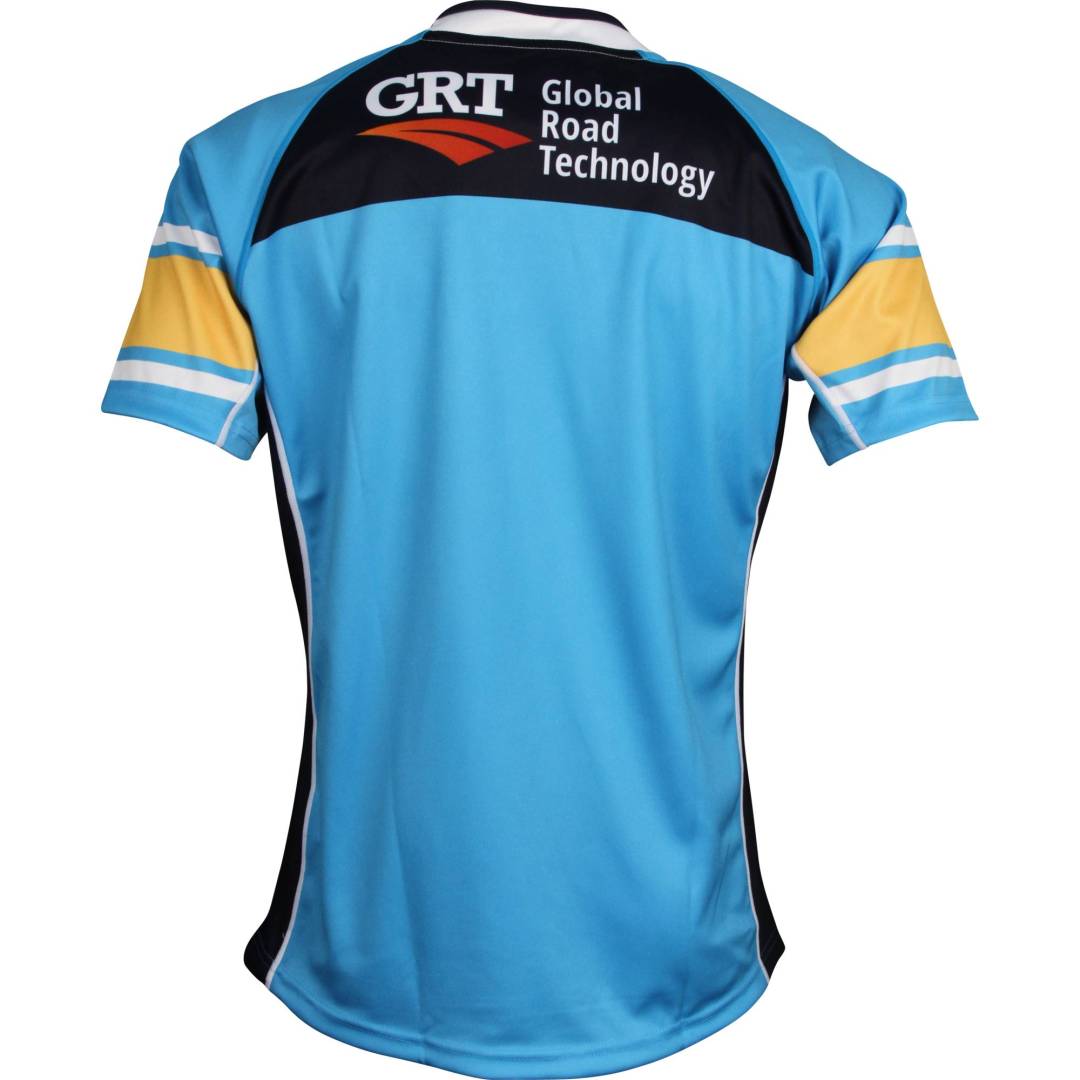 But in a stroke of luck the lack of a sponsor in the middle, specifically the horrible two-tone iSelect one from last year, has understandably given the jersey a much cleaner look. Hell, there aren’t even any sleeve sponsors, with just a small TFH sponsor below the collar and large, ungainly one on the back.

No doubt some sponsors will come on board to mess it up at some stage, but for the time being let’s the boys from the Gold Coast.

It’s even better for the away jersey, which again looks far cleaner without the sponsors, but there are also a few nice new touches that make it less gawky than last year’s.

The navy trim and chest border are noticeably darker – possibly black – while there are now two shades of light blue, one across the chest and arms, and another down the side and trim. 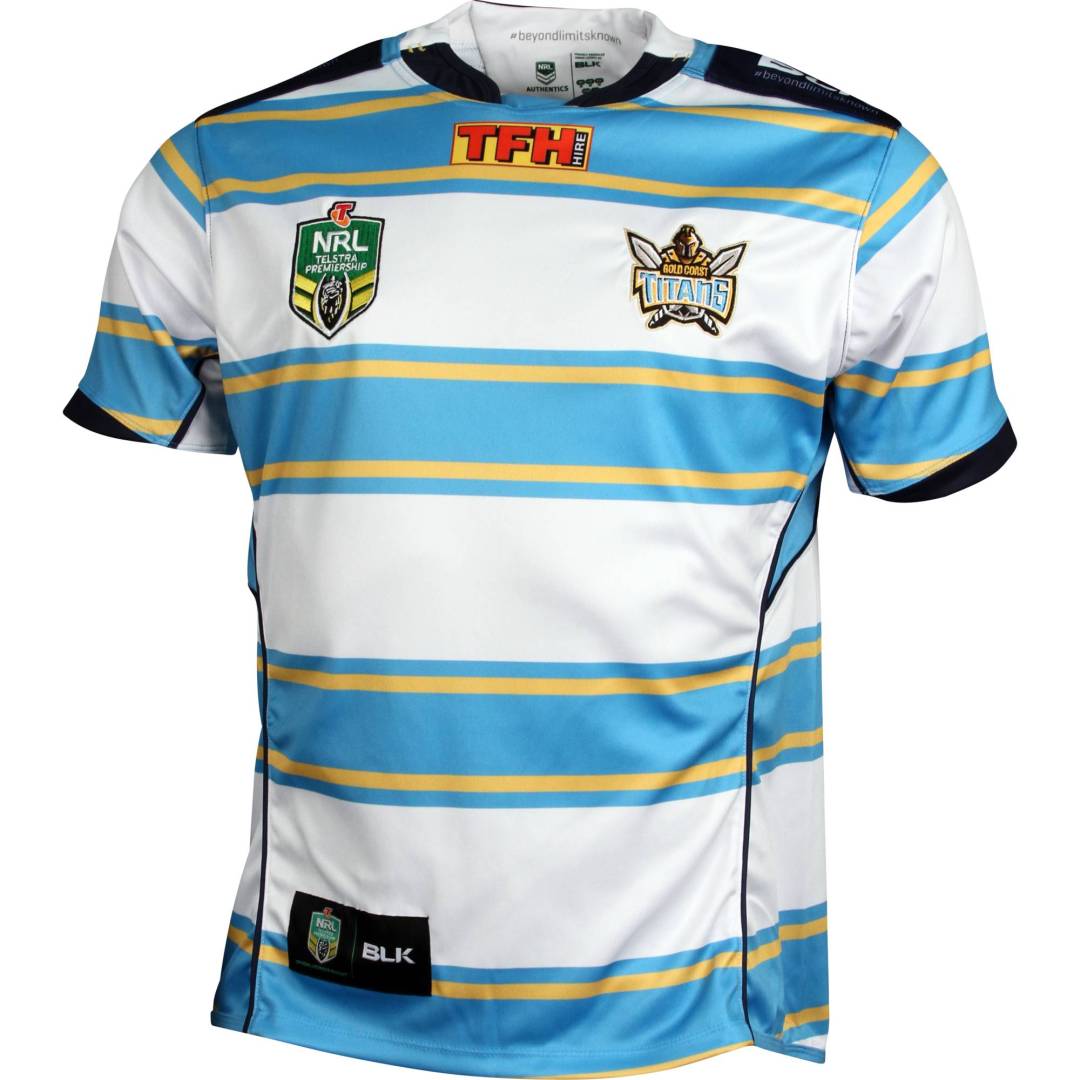 While the home and away shirts are pretty much as you were this year, the alternate shirt is a new addition, and a welcome one it is at that. We’re slightly confused as to the difference between an away shirt and an alternate shirt… we’re guessing it means that the Titans can choose to wear this home or away whenever they fancy a change. And here’s hoping they do… a lot.

We bloody love a hooped jersey here at RSW, this is not news, and this is a particularly lovely example – the blue and white hoops, with the striking gold accents, is a really cool combo, and the jersey as a whole has a very retro vibe.

Many NRL teams have Heritage jerseys that often reflect a club’s traditional colours, or the jersey of a previous team that represented their given area in rugby league. The Titans have only been around since 2007, so they’ve not really got much heritage to call on to call on, so instead this shirt is designed to be a hat-tip to the the Gold Coast Seagulls – who played in the NSWRL and ARL between 1990 and 1995.

Obviously the colours are more Titans appropriate, but with the hoops-and pinstripes combo of the Seagulls, working together in a very successful way. As an aside, while we’re big fans of this shirt, if the they’re going to continue down the Heritage route in future, we’d LOVE to see a modern take on another of the Titans ARL ancestors – the Gold Coast Chargers. Mint green with purple and grey stripes? Let’s make it happen, BLK!

Given the absolute cacophony of shit that’s surrounded the Titans in the last few weeks, we’re reluctant to pile more misery on their presumably miserable fans – and the slightly better, but still a bit ugly, home and away shirts almost led us to have to give the dreaded SHIT rating here.

Thankfully though, the alternate shirt has pulled it back from the brink – hoops, retro vibes, pretty colours… it’s hopefully a sign of more positive things to come for the Gold Coast franchise.

SHIT/GOOD RATING: BETTER THAN ANYTHING ELSE THAT’S GOING ON WITH THIS FRANCHISE RIGHT NOW