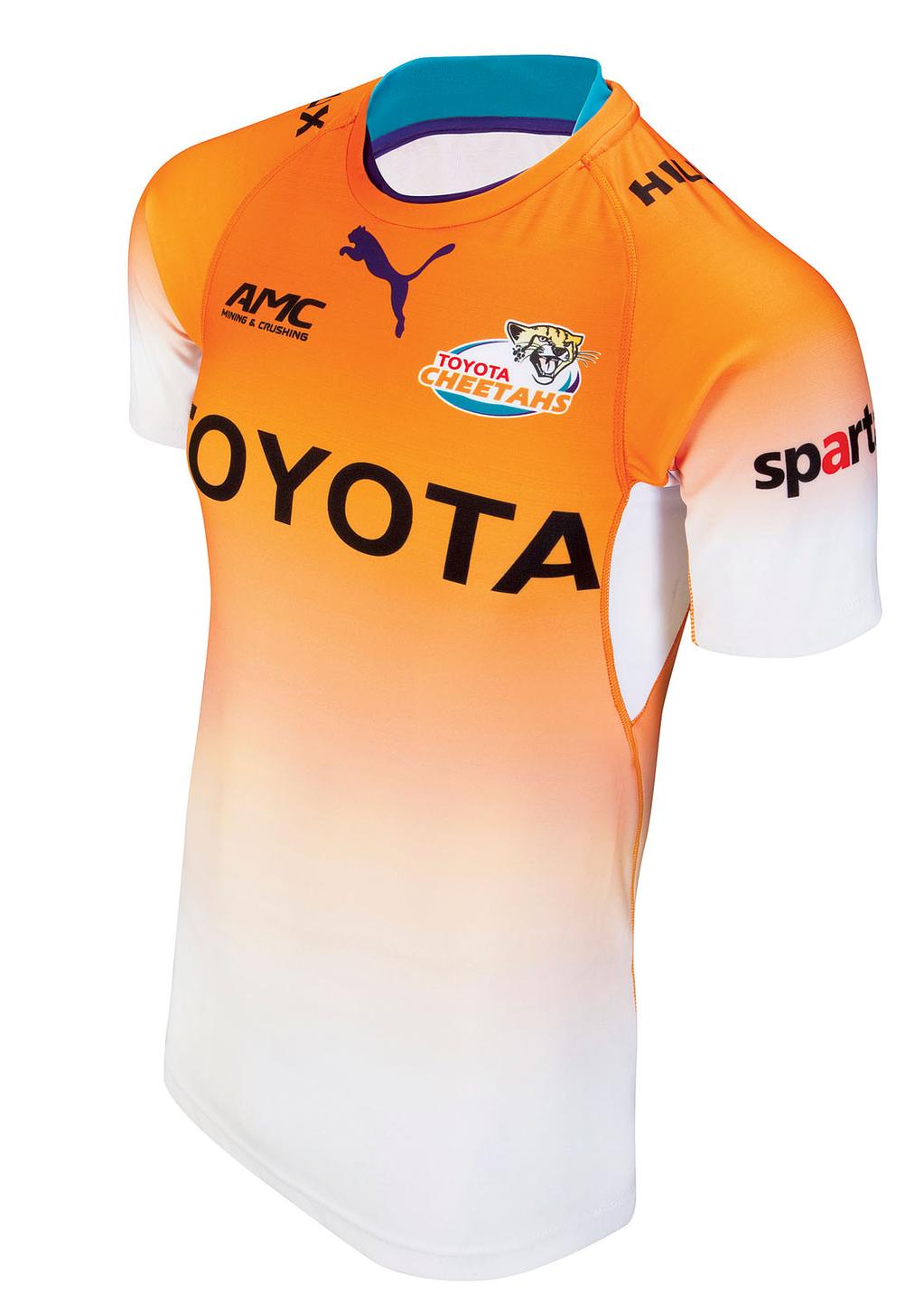 After a brief flirtation with the playoffs in 2013, it was back down to earth with a bump for the Cheetahs – despite having an interesting and actually quite nice kit from Puma last year, they ended up rooted to the bottom of the South African conference, and finished 14th in the overall standings – hardly what they expected after a sixth place finish in 2013, and with the likes of Adrian Strauss, Cornal Hendricks and Willie le Roux in the side.

So, it’s more than time for a fresh start in Bloemfontein, then – and what better way to make a statement that things are changing than a whole new colour scheme for your kits? Since their founding in 2005, the Cheetahs’ primary home shirt colours have been white and teal, but over the last few years, Puma has consciously started to add more and more orange accents to the design. It was all part of a plan, you see, as this year they’ve torn the template up and produced a very slick looking design that’s primarily orange, fading down into white. Orange has often been used as a change shirt colour for the Cheetahs, as it was last year, but this time it’s the main event.

It’s a very bold, modern design, and one that does the ‘gradual fade’ effect much better than England’s regrettable ‘tequila sunrise’ Sevens shirt from a few years back. The white fade also compliments the jersey’s white shorts, giving a genuine ‘half and half’ effect – interesting, given that Puma says this jersey is quite literally, a stage in the the Cheetahs’ home shirt going completely orange.

According to the Cheetah’s marketing bod, this faded design also ‘makes for maximum brand exposure to our sponsors and maximum supporter loyalty to our fans’ – we’re not sure what that’s supposed to mean, as the moment he said ‘brand exposure’ it made us do a sick in our mouths, but we think he means it’s a very clean, uncluttered design that will look as good on the terrace as it does on the field. Probably.

While this is obviously a lot less busy than Cheetahs jerseys of the past, it’s nice to see that the traditional purple accents haven’t been abandoned (the Puma logo and jersey numbers are both purple), while we really like the turquoise accent around the collar. And speaking of turquoise…

The alternate kit is a departure again – making turquoise a primary colour on a Cheetahs kit for the first time. We think it really works – it’s an incredibly eye-catching colour choice, but we think the faded design actually works better with turquoise than it does with the home shirt’s orange, though we’re less sure the purple accents work as well here – perhaps orange would have been a better choice. That says, if that England shirt was a tequila sunrise, there’s definitely something about this shirt that reminds us of a dubious Wetherspoon’s cocktail…

We’re keen to say ‘alternate’ and not away kit here, by the way, as the Cheetahs have indicated that they’ll be wearing both shirts at home this season. We’re sure the fans won’t mind one jot however – the new orange and turquoise colour scheme makes the Cheetahs instantly more recognisable and different than they have been in the past, and while we’re sure not everyone will appreciate the faded design, we’re really rather taken with it, particularly on the alternate kit. Blue Lagoons all round!