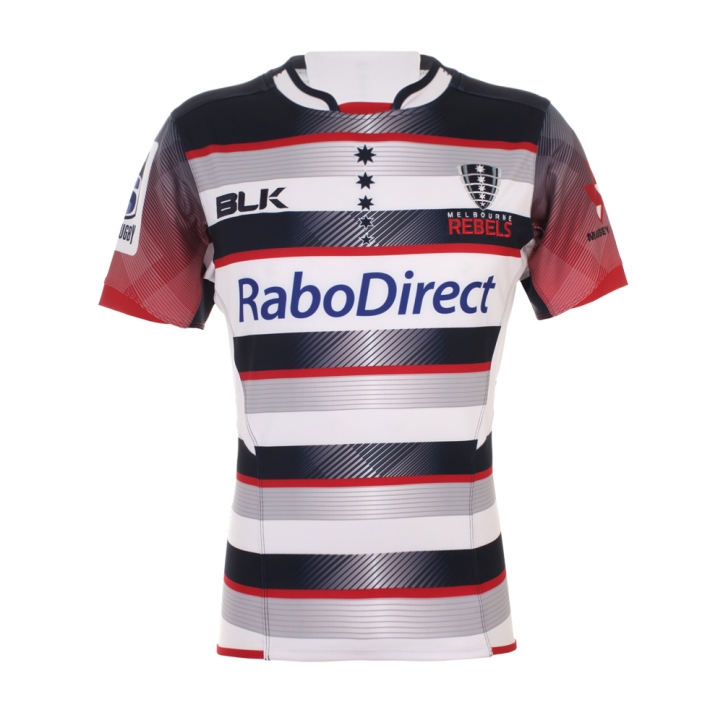 Since the Melbourne Rebels became the 15th Super Rugby franchise back in 2011, things have not exactly been totally rosy. They’ve finished rock bottom of the overall Super Rugby standings on two out of their four seasons, including last year, and have yet to trouble the playoffs. What’s more, they’ve made some big-name signings that have either not quite panned out (hello, Danny Cipriani!) or have full-on blown up in their faces (goodbye, James O’Connor and Kurtley Beale!). It’s hardly been an auspicious first four seasons, then – so what better way to put their past behind them and make a change?

If you’re a Rebels fan, or are at least familiar with the franchise, you’ll wonder why we’re running the alternate shirt at the top of our review, and not the home shirt… well… that’s because this IS the home shirt. Yup, after four years of wearing a nice but fairly anonymous dark blue at home, the Rebels and BLK are shaking things up this season, by changing the team’s home colours to white, with blue, red and grey as secondary concerns.

It’s a smart move in more ways than one. For starters, up until this season, four of the five Aussie Super Rugby franchises played in a home shirt that was to a greater or lesser degree blue. We’re not entirely sure how that was allowed to happen, given that two of those four have come into existence in the last decade, and someone should really have mentioned that having four teams all playing in the same colour might make things feel a bit homogeneous, but that’s by the by. The important thing is that now the Rebels have a look all their own, which in a town and a nation that’s increasingly disinterested in rugby union in favour of League and Aussie Rules can only be a good thing. 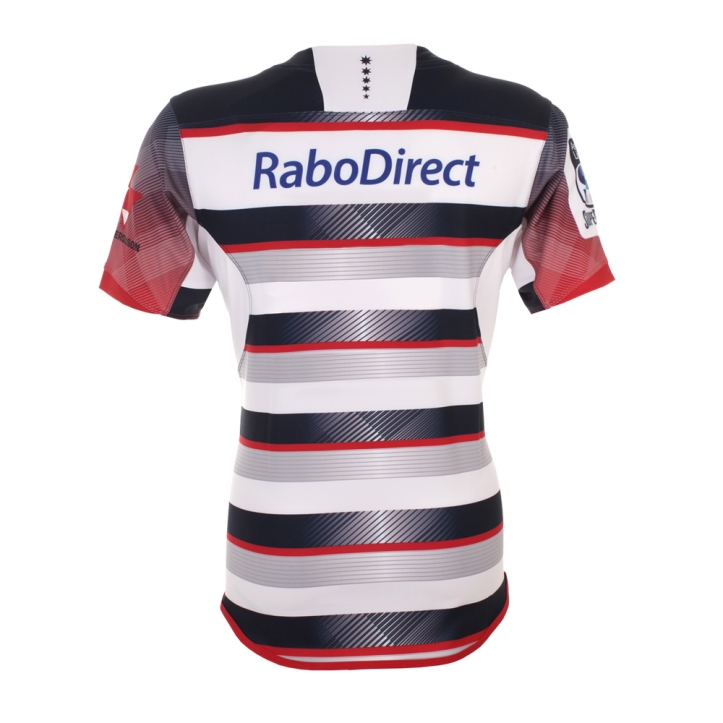 And what a nice new look it is, too. It’s vaguely similar to last year’s kinda-hoopy alternate kit, but there’s a lot more going on here. We really like the fusion of white, grey and blue hoops with red pinstripes and sleeves – it’s like a very modernist take on a classic Bath or Leicester-style hooped design. Very cool.

If there’s an element of the design we’re not too keen on, it’s the hatched pattern on the hoops themselves, and on the sleeves to boot. We enjoyed the simplicity of last year’s designs, even with their star-based hoops, things didn’t feel too busy, but we can’t help but feel that things get a little cluttered in places here, particularly on the sleeves, where perhaps plain red would have looked better. 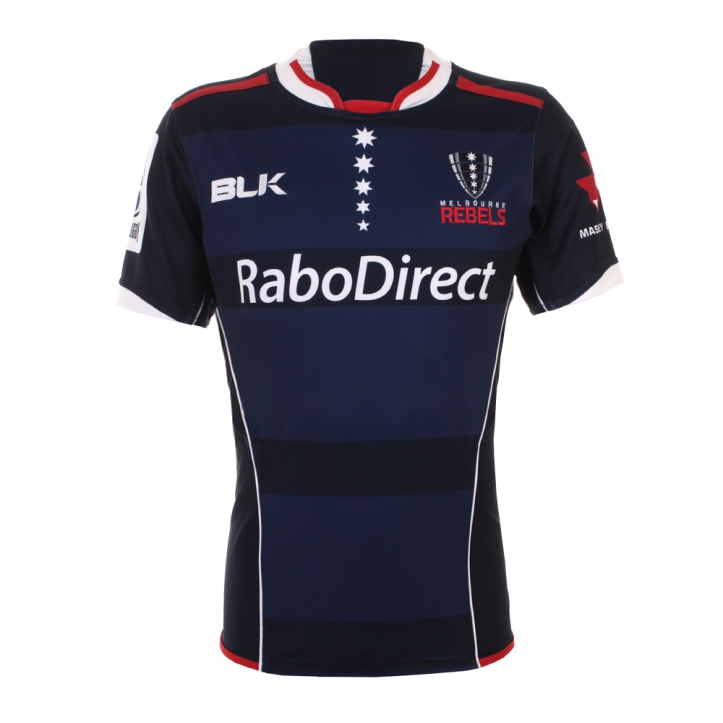 Perhaps wary of alienating any fans that really loved the old home colours, and also with a nod to the club’s short history, the alternate shirt is plain blue, a la home shirts of previous seasons. It’s a very nice design, on the whole – obviously less daring than the home shirt, but still classy and interesting. We like the way the subtle ‘star hoops’ of last season’s home shirt have been turned into giant thick mega-hoops on this year’s design – it’s a pattern we’ve not seen much of before, but when used this subtly, we think it really works.

There are a few shirt-nerd points of interest on this design, too – the BLK collar pattern appears to have been tweaked a bit, so the cut-out part at the front has been significantly reduced compared to the previous design. It’s a change for the better, we think, as we found the old BLK collars to be one of the least successful aspects of their otherwise excellent fit and design. We’ll see how it pans out when we try them out for ourselves. We also really like the new panel that runs up from between the shoulder blades into the collar itself, and the way it’s been used to feature the Rebels’ ‘five stars’ logo. It adds interest to a bit of the shirt that’s often a bit bland and featureless – nice. 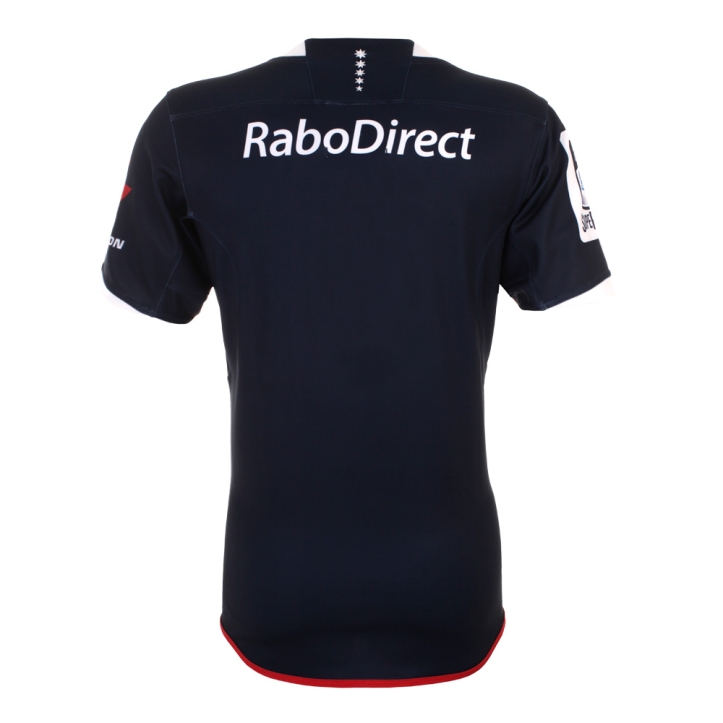 So, it’s all change for the Rebels. By effectively swapping their home and away shirt colours, they’ve set themselves apart from the blue crowd in Super Rugby, and have a shirt design that’s bold, modern, and really quite nice. We’re looking forward to seeing how BLK and the Rebels develop this new look over the coming seasons – will they continue with the hoops? Will it all go back to blue? Time will tell, but for now, the Rebels have definitely made a statement in the shirt department – whether they can replicate that on the field is another question entirely…