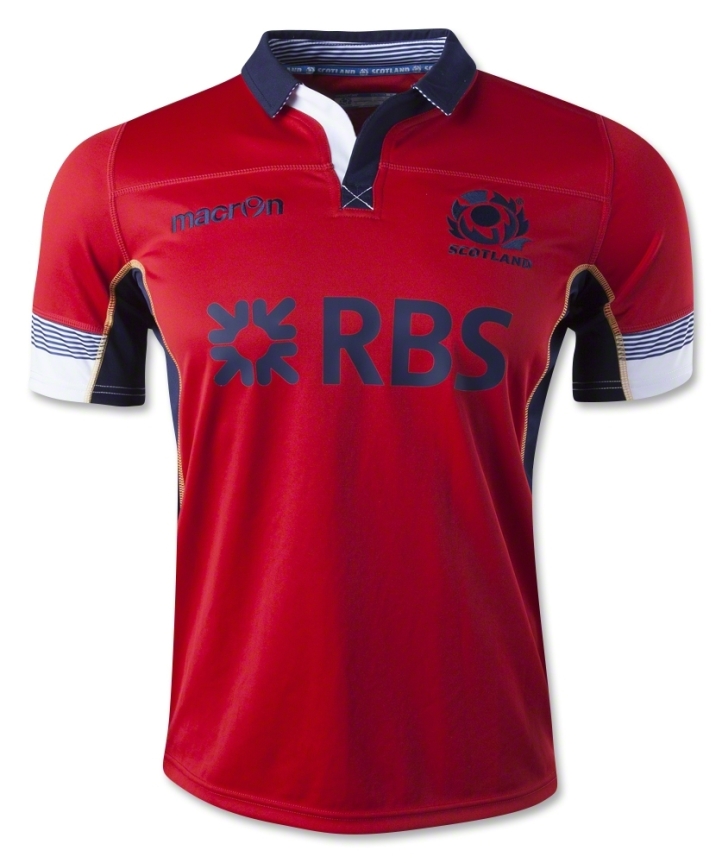 There’s no new home shirt for Scotland this season, and given how unabashedly lovely that particular garment is, quite right too. We are if nothing else the most heinous rugby shirt addicts, however, and so we’re very glad to see that things won’t be all the same this year, as the Murrayfield men will be trotting out in a new alternate jersey. Let’s take a look.

First things first, we should probably remind you all just how offensively awful last year’s Scotland alternate shirt was. Just look at it. It was the first in a worrying trend of Macron Scotland shirts that looked like they’d be more suited to the employees of one of Scotland’s many fine gyms and leisure centres than gracing the hallowed turf of Murrayfield. It was a Saltirey nightmare of the kind that David Cameron probably had the night before a certain vote on the 18 September this year…

So, it’s not hard to see how this year’s shirt is a significant improvement over last year’s monstrosity. For starters, the colour’s a much better choice – the red and yellow have been borrowed from Scotland’s ‘other’ flag – the Lion Rampant Of Scotland.

Using large swathes of red and gold might have been a bit much for a rugby shirt, so Macron have sensibly kept the gold to some stitching under the arms, and have used standard Scotland blue as the primary contrasting colour.

With the ever-welcome proper collar and a pretty simple basic design, if they’d left things at that, we’d have been patting Macron and the SRU on the back for a job well done. Unfortunately though, that’s not the case here.

Yup, someone decided that three colours just wasn’t enough here wasn’t enough and added some white to the mix too. What’s worse, they even decided do go all in with blue and white pinstripes, too.

You know the only profession that makes use of tight, fine blue and white stripes on the sleeve cuffs and other areas? That’s right, this fella. Now, Scotland has a pretty impressive maritime history, but we’re pretty sure that nobody in the SRU wanted fans to be thinking ‘hello sailor’ when Scotland take the field in this shirt come November.

We just can’t understand the thinking here – it looks dreadful, it really messes with the coherency of the shirt, and it’s totally unnecessary. It comfortably beats out the ‘Angry lion on the arse bit of the shirt’ sublimation as the jersey’s worst feature.

If they’d have stuck to plain blue, or even plain white, instead of these stripes, we’d probably have given this shirt a pass. However, the stripes just take a decent design and add a horrible splash of try-hard maritime trendiness to proceedings. We just can’t get with that, and while it might not be a leisure centre polo shirt like last year, it’s the kind of rugby shirt that would probably be best accessorised with some boat shoes, sans socks. And that, frankly, is not a look we’ll be sporting any time soon.