While they’re still struggling to shed the image of ‘that rubbish Irish province everyone forgets about’, Connacht have been far from rubbish for some time now – after tasting Heineken Cup rugby a few seasons ago, the Galway side have recruited impressively and smartly (Mils Muliaina!), and the Sportsground is a place where no team really fancies going, regardless of their pedigree. Connacht also hold the distinction of being the first top-flight European side to sign up with BLK when the firm branched out of the Southern Hemisphere last year. They’re now in relatively esteemed company, of course, but let’s take a look at how BLK got on with their second crack at a Connacht shirt…

Last year’s Connacht home jersey offering from BLK was a bit of a strange one – it was a bit busy and a little bit early 2000s for us in principle… and yet the design hung together very well, and we almost liked it in spite of ourselves. The alternate and Euro shirts were equally decent, and all in, it set a good tone for the brand in Europe.

This year, quite a few of the basic elements of the home jersey have been changed. They’ve kept the contrasting shoulder colour thing, which we always really like, but this time, they’ve swapped the colour from black to white. We really like the change – it makes for a more striking jersey, and makes the whole thing look a bit less dour.

Unlike last year, there’s also a great deal more blue used in the jersey this year (just wait until you see how much…), and we think it makes more sense to use that as a darker colour on the shirt than black, as it ties in with the Connacht badge much better.

Now… for the bad stuff. We aren’t opposed to pattern sublimation on modern jerseys at all – when it’s done well, we think it can be really nice. Here, however… well… they’ve adopted a kitchen sink approach to the sublimation that just goes far, far too far. It’s less kitchen sink and more sink, worktops, fridge-freezer, recycling bin… the fucking lot.

Those slashes, though… Christ. That’s what we assume those weird jagged blue lines across are anyway – slashes of the griffon’s claws. It’s the jersey equivalent of pyrotechnics at the start of a rugby match – unnecessary and ugly overkill to an already bombastic and high-energy affair.

As if that wasn’t enough… well, let’s take a look at the back, shall we? 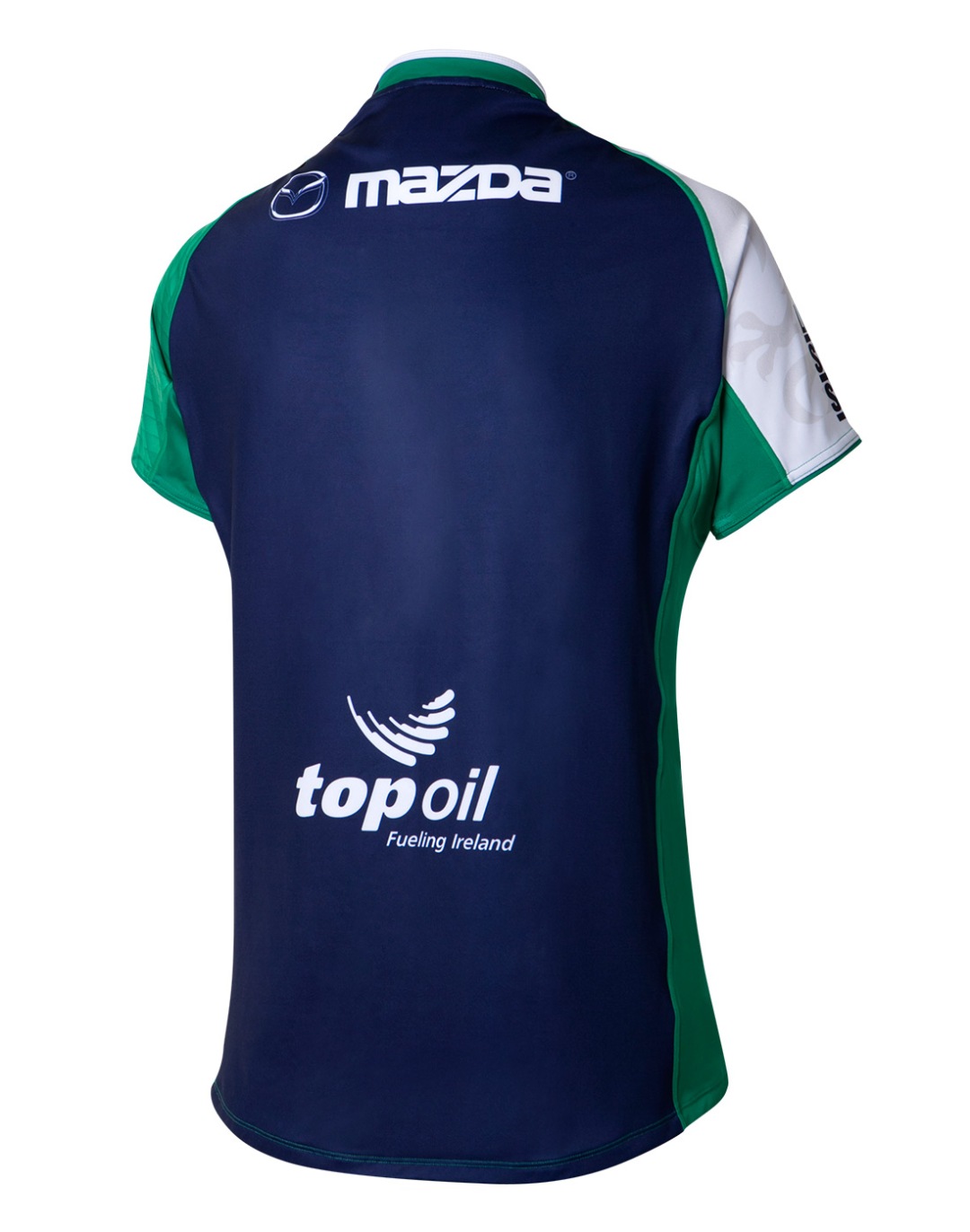 Hang on, is this the same shirt? Have we got the wrong image or something? Hang on… we’ll just check… nope, this is indeed the back of the same jersey we just showed you.

Yup, in what is rapidly becoming the hot new trend for shirts this year, the back of the jersey is very different to the front – in this case a completely different colour. Interestingly, the last shirt we saw with this back-and-front colour contrast was another green and blue shirt – the new Cardiff Blues European jersey. And we didn’t like that, either…

We’re not sure what the thinking is by making these half-and-half shirts – asides from perhaps giving that very desirable effect of making it look like you’ve had to stitch two shirts together because you can’t afford to buy a new one. Has rugby entered its boho chic phase?

Whatever the designers thought, we just can’t get with it – it looks really stupid, and ruins the overall flow of the jersey – hopefully this trend will be deader than parachute pants by next season.

The alternate kit has the same basic template as the home shirt, and yet for some reason, we can’t bring ourselves to dislike it in the way we do the green jersey. We think it’s the amount of blue used – it doesn’t make the claw slashes stand out quite as much from the rest of the shirt, and while we’re still not exactly handing out awards, it does all hang together a bit more coherently.

Round the back, things are actually a lot better – we’ve got no sublimation or pattern here, but BLK has at least opted to keep the colours consistent. It looks a great deal better, and really makes the blue shoulders/sleeves/sides of the shirt stand out in a pretty handsome way. It just goes to show how much little tweaks to a design we don’t really like can make a massive difference.

So with the home shirt here, this is very much a case of ‘so near, but so far’. There are some really nice elements, and with about 20% less fiddling – namely the slashy front and the dark blue back – this would have been a really handsome jersey indeed. Instead, it’s a little bit of a mess in places. The alternate shirt just goes to demonstrate what a little bit of restraint can do – by simplifying what is basically the same design, they’ve made a perfectly decent shirt here. Not sure it quite manages to redeem the home jersey, however. Pity.

SHIT/GOOD RATING: SO CLOSE BUT… AH IT’S A BIT SHIT.