Coming off the back of making the Pro12 Grand Final last season, Glasgow appear to very much be a side who are going places. With a squad loaded with Scottish internationals and a generous helping of impressive foreign imports, they’ve got the quality and depth to become a real force. But all this nonsense about ‘kicking on’ and ‘winning things’ is entirely pointless if they do it wearing rubbish shirts, obviously. Right then…

Last season’s Glasgow shirt was a little bit of an ‘almost there’ affair – it had some decent elements, but they didn’t quite come together. We liked it, but we felt it was still a couple of notches away from being a properly good shirt.

This time around, things are a lot more clean cut – this is a bloody handsome, clean and classy rugby shirt. We really like the moving of the sky blue parts to the sleeves from the shoulders, and while it’s getting a little cliched now, the ‘sublimate all the names of your feeder clubs’ into the shirt thing looks a little better than the weird half check/half stripes sublimation on last year’s design.

One thing we do need to have a word about, however, is that collar.

We like proper collars around here – of course we do, everyone does. But we also like modern collars, provided they’re not too weird or football-y, but this… well this is just a bit much. It’s like someone’s stuck a modern collar and a proper collar in a teleporter and this is the resulting mutated mess that’s come out the other end.

It’s too tall for a modern collar, and not fold-down enough for a retro one – it looks like they’ve lifted it directly from an awful Division 3 football shirt from the early 1980s – and that’s very much not a good thing, in case you were wondering… 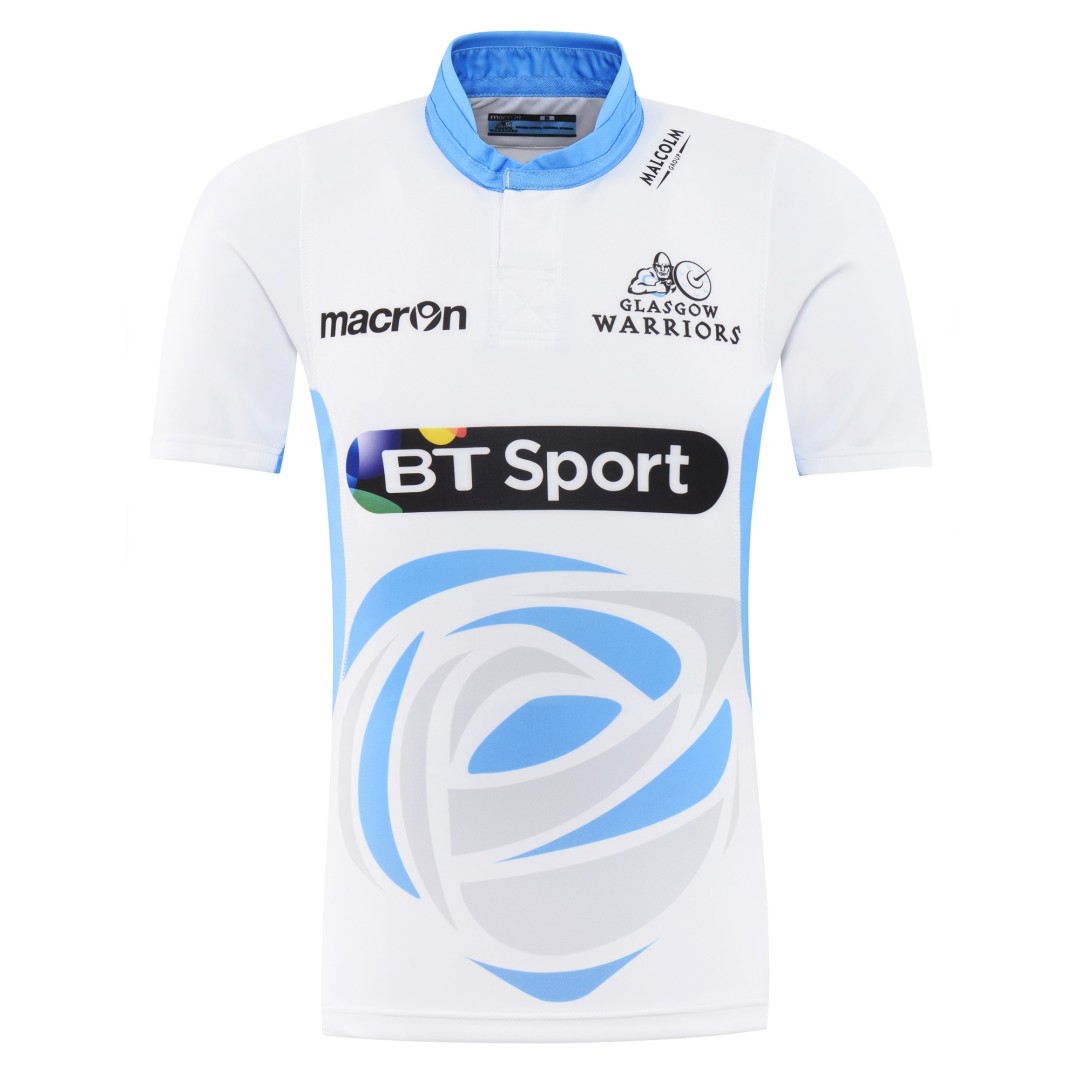 While the home kit is an exercise in restrained and classy design, the away kit is… well… will you just look at that?

There are clearly two halves to this kit, and let’s get the good bit out of the way first. White and sky blue is a really nice colour choice, and we like the careful, restrained use of it on this shirt, it’s a really nice blend, and does a nice job of maintaining the club’s overall identity while being distinct from the home.

And… now for the rest…

You can almost see what’s happened here from a design point of view. Macron designed a very nice, very spartan blue and white away shirt that would have been perfectly decent if left well alone. Then some idiot went ‘Shit, this is a bit plain isn’t it? How are we gonna shift any replicas when the shirt is this plain… we have to do something here…’

And so, back they went to the drawing board, scurrying around for something, anything to add an eye-catching flourish to the jersey – something bold, unusual, and something that could have some sort of vague relation to the team or the city of Glasgow itself.

It seems this took quite a while, because what they’ve settled on is a stylised version of Glasgow-born Art Nouveau pioneer Charles Rennie Mackintosh’s Rose Motif.

‘But of course, we knew that already, you uncultured philistine,” you’re no doubt all thinking. “Barely can we think of the city of Glasgow, or indeed its rugby team, without also thinking of Mackintosh and his famous Rose motif.’ 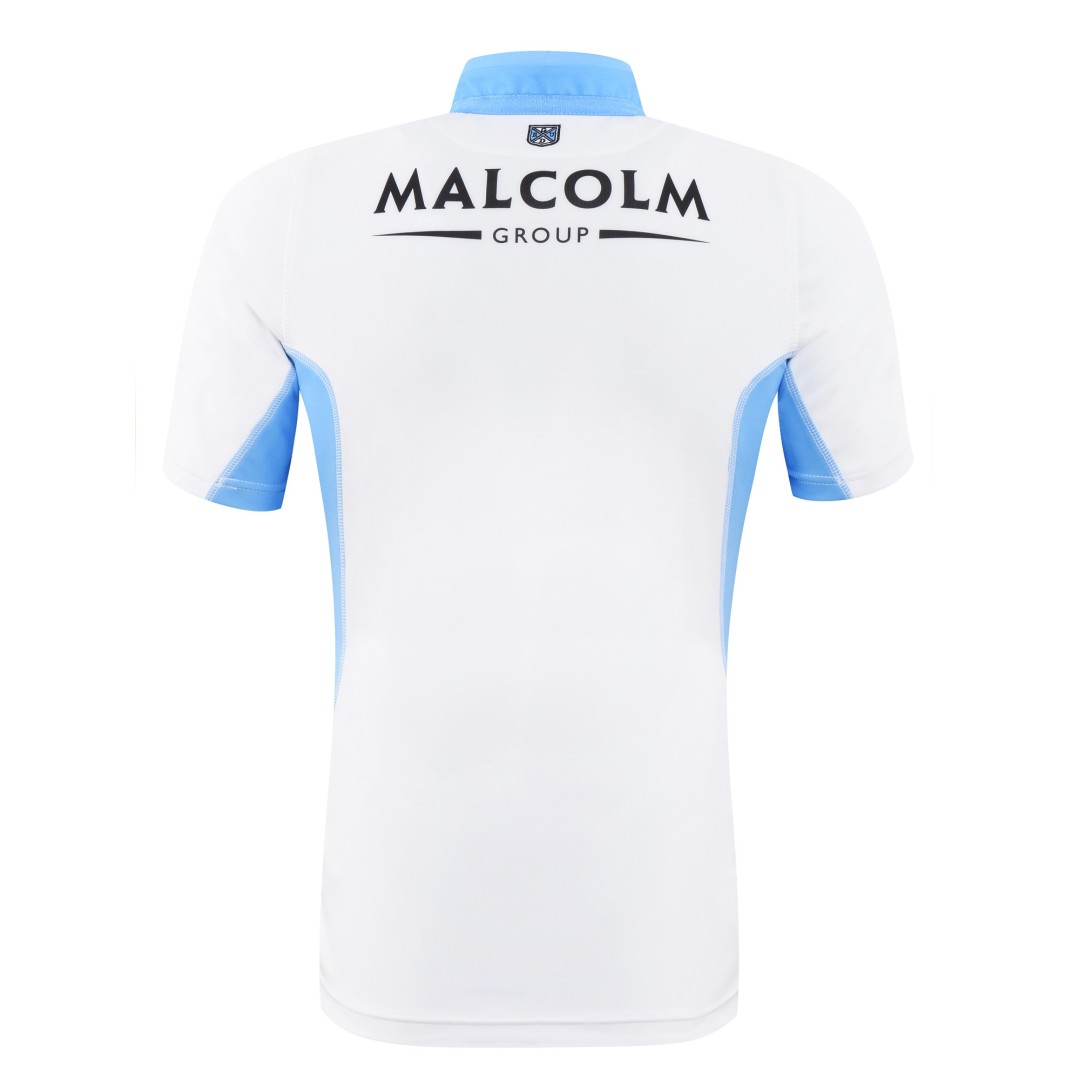 If like us, however, you’re a bit of a cultural Visigoth, you might come to the conclusion that Glasgow have just picked any old shit to adorn the front of their jersey because they couldn’t think of anything better, or couldn’t bare to produce a shirt so very plain. You MIGHT.

It doesn’t look THAT bad, we have to say… it just feels so dreadfully unnecessary and out of step with the rest of the design and the general visual look that Glasgow have pursued in recent years.

That fucking collar looks even worse here, too, by the way.

So… as is often the case, two very different shirt designs, but also two very different levels of us liking them. Macron’s designers are very much in feast-or-famine mode at the moment, and they appear to have hit both pretty squarely with these two designs.