Continuing our sojurn into the world of rugby league, here’s part three of our 2014 Telstra NRL Premiership 2014 round-up. You can read part one here, and part two here, enjoy…

The newest of the NRL clubs having only been founded in 2007, the Titans nevertheless quickly found their feet, finishing third and fourth in the 2009 and 10 seasons before slipping back down the ladder. The first main issue we have the Titans is that their emblem isn’t, well a Titan. Is it an attempt at a Greek hoplite or a Roman gladiator? Either way, it certainly doesn’t remind us of the foes of Olympus from whom the name is taken. Hell, Disney’s Hercules did a much better job a decade before they were even formed!

Still, the light blue and gold colour scheme it’s produced has led to some decent jerseys in the past, which coincided with their most successful seasons. Sadly, if there is a link between jersey and performance then this year is set to be a stinker for the Gold Coasters.

Though admittedly an improvement on last season’s inexplicable shit shirt, which seemed to have a jersey on the jersey (yes, they tried to make it look like a helmet, but it didn’t work at all did it?), the 2014 Titans will be taking the field in this stinker. Straight off the bat, it’s not helped by the horrible two-tone iSelect logo, which has tried its best to blend in with the team’s gold colours to no avail.

It also cuts off the classic league chevron, which was one of our biggest complaints with the Manly jersey. The white borders on the gold bands on the sleeves work well, but whose idea was it to just stick the random white triangle just under the neckline to make it look like a V-neck? BLK have had mixed results with their league offerings this year, and the navy stripes down the sides are another unwelcome addition to a pretty average shirt.

The away jersey fairs better, with the V-neck navy linking up with stripes down the arm to give it some form of semblance, with a nice gold border to the light blue chevron. But it’s merely the better looking of two dogs’ dinners. It’s a shame, as the 2014 heritage jersey (most teams have one, despite the Titans not having a particularly long history) is a gorgeous combination of light blue and white hoops with gold trim, which proves BLK can make lovely-looking jerseys. Shame it’s not the one they decided to give the team.

The Tigers are one of two NRL teams formed as joint ventures between two clubs, in this case the Balmain Tigers and the Western Suburb Magpies. Frankly we’re pleased they went for the more intimidating tiger logo as we owned a Balmain top when we were younger, but the jerseys do at least combine the more obvious tiger colours with the traditional black tops of the Magpies.

A lot simpler than previous seasons but still with a few nice touches, the Tigers’ black home jersey has a bold double chevron, which although cut off by the logo as on other jerseys (Titans and Sea Eagles), at least has a small point at the bottom that completes the design. The orange trim on the collar and sleeves are a nice touch, but the details we really like are the two-tone side panels that stop the shirt from being too top-heavy.

The away’s reversal of orange and black is obviously a little more striking, and frankly the white part of the chevron does unbalance the jersey somewhat, but this is splitting hairs. It’s not as nice as last year’s but still better than some of the monstrosities they’ve had in the past.

The other team in the NRL that’s composed of two existing clubs, but instead of being two neighbours, the union of St George in Sydney and Illawarra in Wollongong, means the Dragons have two home stadiums quite a distance apart. Given the confusing circumstances, it’s a relief that their home jersey couldn’t be simpler… or more boring.

The red chevron on white combo is a staple of many a rugby league club, but where as teams such as England’s St Helens have tried to change things up over the years, the Dragons’ brief foray into stripes is a thing of the past, with 2014’s effort keeping things traditional.

There’s nothing wrong with the shirt, and frankly we like it when shirts are kept simple, but the fact that it’s so plain means that our least favourite team logo in sport, that little bastard dragon also sported by the Queensland Reds, stands out like the little green arsehole he is. 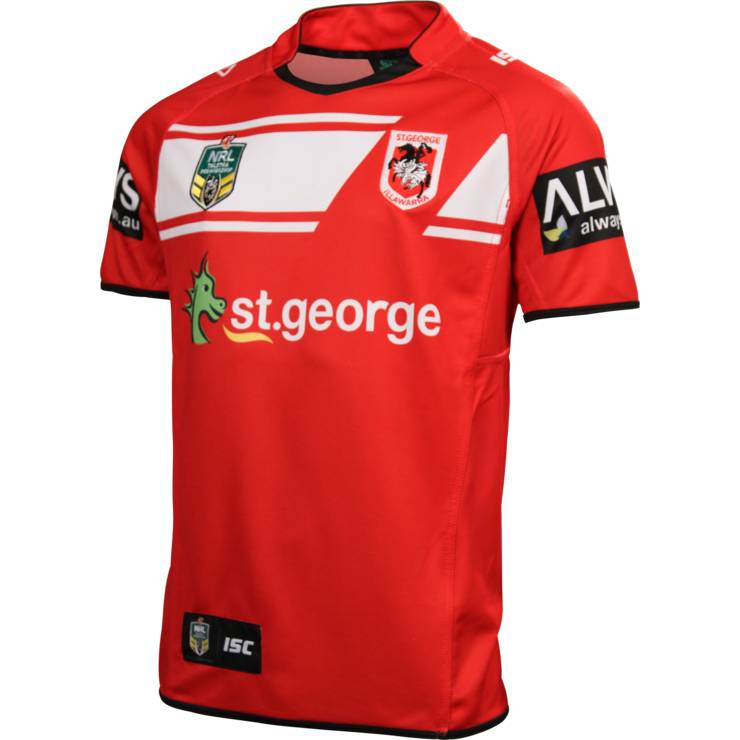 The red away jersey, with it’s white band across the chest, could be a real contender, again simple but more interesting and with a subtle black band on the collar. However, the diagonal red stripe that comes behind the badge on the left-hand side just ruins the whole balance.

All in all, a bit of a needlessly coy-looking dragon’s dinner…