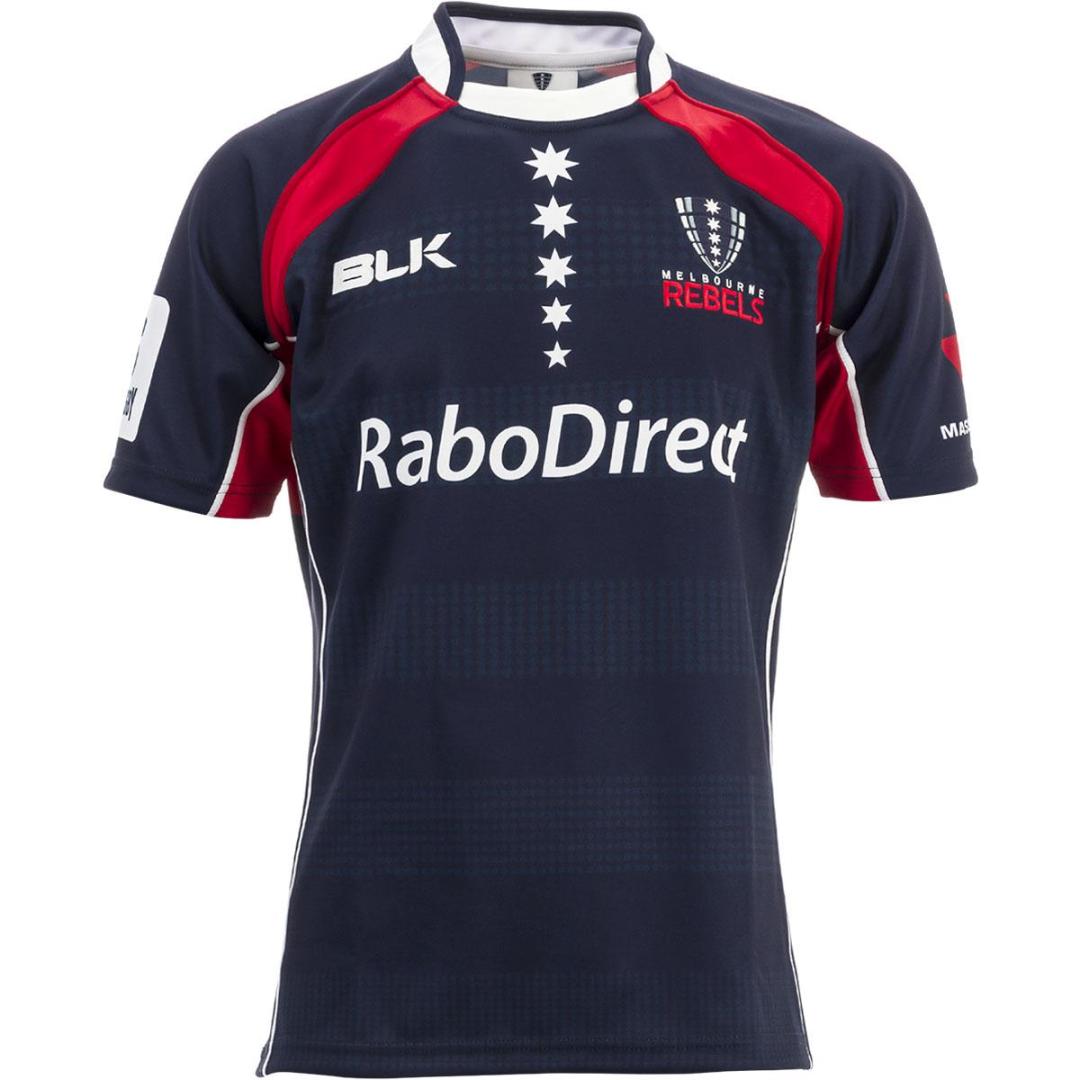 With the new Super Rugby season just around the corner, the new shirts are coming out of the Southern Hemisphere thick and fast. Today its the turn of youngest team in the Australian conference to show of their new threads: the Melbourne Rebels.

On first impression, the home shirt is not really much different to last year’s home shirt, and no doubt, it’s far more evolution than revolution on the design, but there are some subtle little touches that we think really kick the shirt on from last year.

For starters, there’s a marked reduction in the amount of white on this shirt, reducing it to a trim colour and amping up the red – it works really well, and looks far less busy than previous efforts. The collar’s a marked improvement over last year’s slightly tacky version, too.

We also like the way that the jersey apes the 2013 Lions shirt by adopting some sublimated hooping onto the front of the jersey – maybe that’s why the Rebels got tonked 35-0 by a barely-trying dirt-tracker on tour: they were too busy taking notes on jersey design.  Unlike the similar hoops-but-not effect found on this year’s Highlanders shirts, the effect is created by slightly less polarising stars, as opposed to the rather Marmite Celtic pattern on the NZ team’s jerseys.

Indeed, the stars are a big point of emphasis with the new home shirt, and perhaps it’s not hard to see why. When the Rebels were founded back in 2011, the five stars were supposed to represent the five core values of the team – Respect, Excellence, Balance, Ethos, Leadership (did you see what they did there?!). Putting aside for a moment the fact that we’re not quite sure that ‘Ethos’ can be classed as a ‘value’, you could argue that between the boozy antics of punchy Kurtley Beale and airport enthusiast James O’Connor, the 2013 season wasn’t exactly a great one for the Rebels’ off-field image.

By including the five rows of stars on the front of the jersey, they’re aiming to send a clear message to fans and players that the Rebels are not a team of drunken troublemakers that they were often depicted as last year. We’ll see. 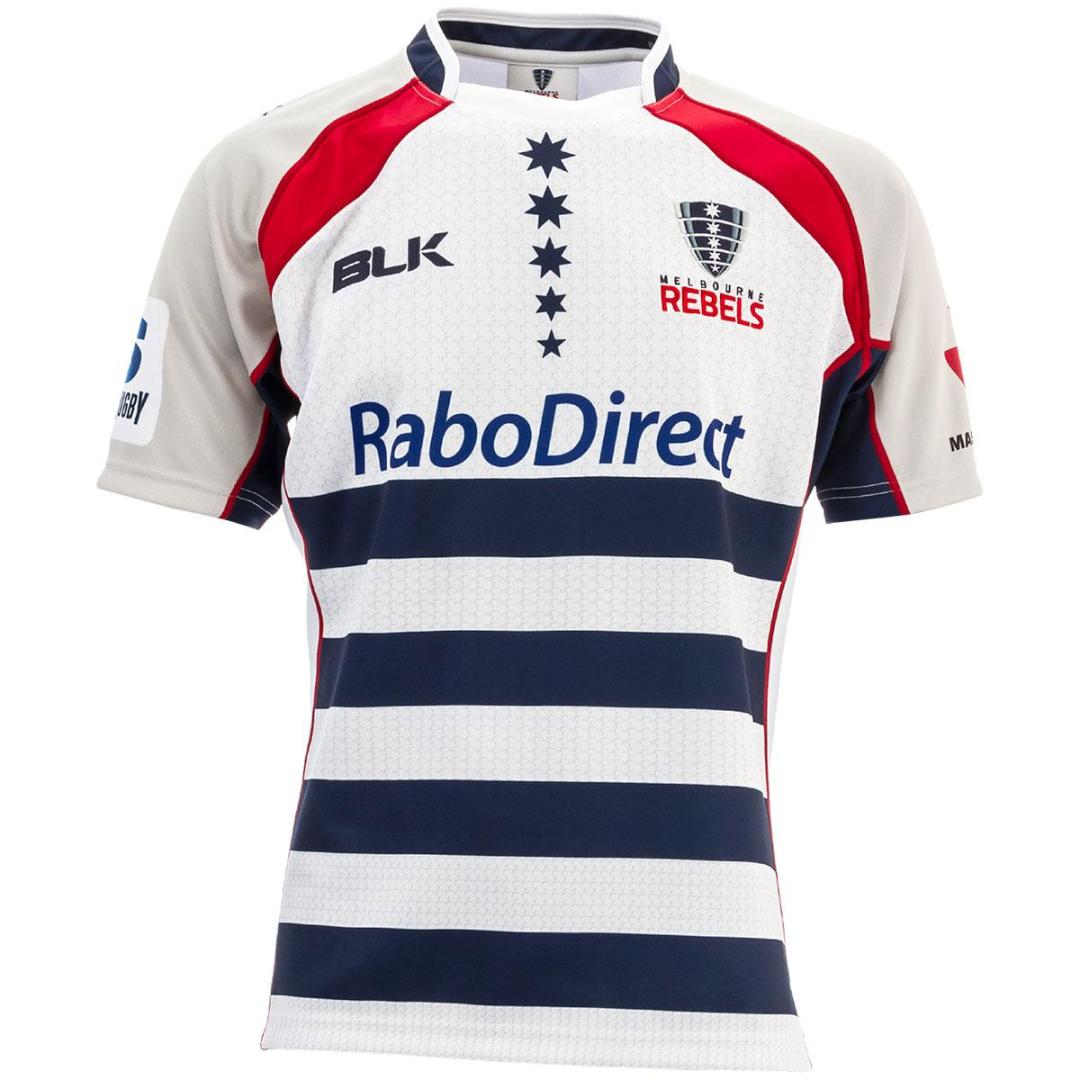 While the hoops are rather subtle on the home shirt, there’s no such discretion on the away jersey. Someone described it on Twitter as ‘The love child of a Stormers jersey and last year’s Rebels away shirt‘. That’s pretty spot on, really, and there’s little doubt that despite it not looking too bad on initial inspection, a closer look makes it all go a bit wrong.

For starters, there’s the sleeve/shoulder area, which for some inexplicable reason is off-white. Why? We honestly can’t think of why anyone would design a shirt that looks like its faded in the wash before its even left the shop? It’s horrible. Then there’s the rather ugly houndstooth pattern sublimated into the front of the shirt, and the fact that it seems like they took all the colour and panel-based fussiness that was pleasantly absent from the home shirt has been inflicted on the away. It’s a bit of a mess.

Again, the five stars are prominent on the alternate shirt, and it’s clear there’s a concerted desire to impress the right values on their players and fans through these jerseys. You could argue that all that means nought unless they can effectively discourage their players from going to kebab shops at four in the morning two days before a test match, but with Beale and O’Connor out the door, the Rebels can hopefully now put a bit of distance between themselves and last year’s circus.

It’s a tale of two shirts, then. The home shirt is without doubt the nicest the young franchise has had, and manages to do the tedious ‘shirt with a message’ thing in a subtle way. The alternate is an absolute dog’s dinner, sadly – a mess of ideas where just one would have been far better. On the whole though, that home shirt it just nice enough to keep this pair in our good graces. Just.